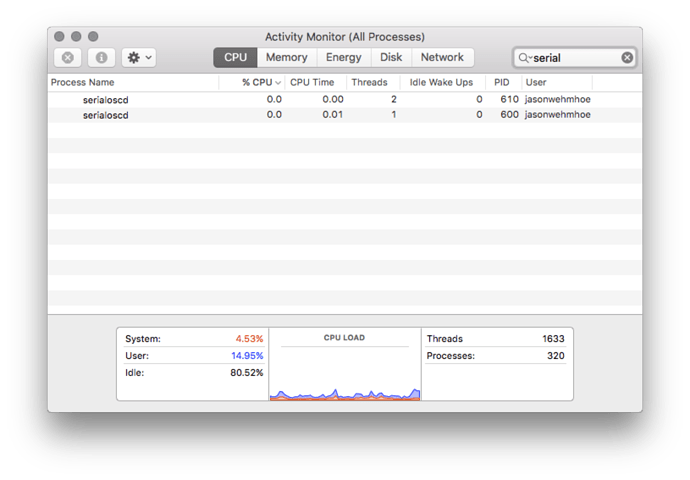 but I don’t see any monome in /dev:

Maybe someone can help:

I updated to OSX 10.11. and now there seems to be a problem with my monome 128.
When I plug it in it flashes in the right corner but somehow for example monome test can’t recognize it. It wont light up and I can’t select it from the list (see photo).

Apps like Flin or sum etc won’t work anymore because they don’t see the monome.

Anyway some M4L patches like terms work fine. But M4L won’t see it either in BEAP.
Any ideas?

was it previously working on 10.10 and you just upgraded?

have you tried manually installing the FTDI driver? (i know that an apple-version is included in the OS now, but perhaps it is broken?)

i’m trying to upgrade in order to troubleshoot this, but the apple store isn’t letting me download it-- leading me to believe they want me to buy a new fucking computer.

Yes, it was working under Yosemite. I haven’t installed the FTDI driver.

I’m going to try that and a couple other things later this afternoon.

good to hear they’re working on older computers (i’m on a 2011 macbook air that runs with complete adequacy). i have no idea if i’ll be able to resolve my not-updatable-ness easily-- short of formatting the system (i want to dual boot linux anyway).

It occurred to me after I created this topic that I need to remove a USB hub from the equation, and I’m also going to try one or both of the other macs to see if there’s something specific to this computer or not.

If I eliminate my USB hub everything works fine.

Not quite sure what to do about this. I kinda need every USB port I have.

any chance you can try a different hub? that’s a painful new problem to show up.

Adds 28 ports including 4 USB 3.0 ports to any computer

But the grid works fine with this hub (that I can’t find the AC adapter for, so it’s running purely on USB power):
http://www.belkin.com/uk/p/P-F4U040/

I can make this situation work. Would be really neato if somebody had a recommendation for a very reliable and ridiculously large USB hub similar to the Manhattan linked above. I bought that thing almost as a joke, but eventually came to realize that I really do have a large number of USB thingies I’d like to keep plugged in, so it’s less of a joke now.

My new Anker hub works great. Thanks so much for the recommendation.