What a great event this will be. I haven’t had the pleasure of see/hearing either live, so I’ll definitely be there. 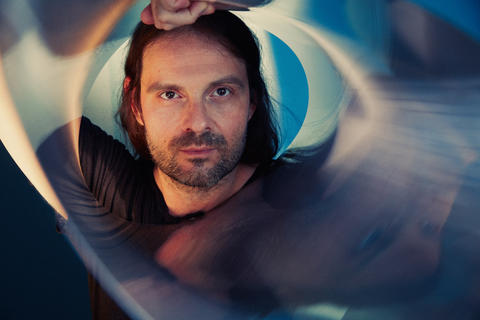 A double bill of innovative musicians experimenting with electronic instrumentation and visuals.

I saw Alessandro Cortini on his Avanti tour at the Barbican. It was great and I think he said it was one of the better venues for sound and vision. Enjoy.

thanks for that, I live about 30 min walk away from the Barbican and I need to pinch myself every now and then how lucky I am to have such a class environment on my doorstep. I’ve seen many great shows there

Woooooooow so much to fomo about this

I grew up nearby and took it for granted

It’s only moving away that’s given me more appreciation. It is a very good venue though.

Listening to Volume Massimo now for the first time. Feels like a development from the one-device albums. A little broader sonically. I’d be interested to know what the live rig is like for this tour.

In the late 90s I almost rented an apartment there. Unfortunately it was really out of my budget and in pretty poor condition (the whole place is listed so many still had original 60s fittings).

However I do sometimes still regret not taking the chance; it is a magical place.

Around the same time we did some guerrilla filming there for a “dystopian future” interactive website.

Will be going to this also… looking forward to it a lot as I have very limited exposure to either artist and really up for hearing something new. Obviously I did a bit of youtube research. Anyone meeting up for a pre gig pint?

The us date format for a London Gig! bugs me…

Wow! I’ll be seeing them too, but at Semi-Breve in Portugal!
Morton Subotnick will also be there!

Hope you enjoy it. Cortini’s set at the Barbican didn’t seem to be very live to me - more of a mixing stuff to a video playback. I hope you have a greater tolerance to contemporary-dance/modernist architecture videos than I do! Ciani was much more fun.

I’ve seen him a few weeks ago. Honestly it was a joke.
Just moving a few volumes on a 4-track tape player, while broadcasting Super-8 films of his childhood.

Ciani was just great - I could have sat through hours of her performance, and she is such a vibrant spirit on stage.

I do really like Alessandro’s music and admire his artistic vision - I was blown away by a few tracks. But although there were some beautiful visuals and cinematography going on, his performance and music (sadly) took the backseat playback to someone else’s art films. I didn’t get a sense that Alessandro was doing anything to be honest and after the first couple films it all felt a bit too… melodramatic. I preferred to close my eyes for much of it

Melodramatic… yes i was thinking netflix crime drama soundtrack for about half of it… which of course is ok in its way. Just too polished and without the dynamics of any sense of performance.

With Ciana there were odd moments where she pushed the slider a little too far or jumped in a change which just reminded you what a fragile set up a modular can be and of course the surround sound was happening as well. As you say her personality on stage really shone out. I wish she had come on second and done the longer set.

Wow guys! Did not see that coming!

I’ve never seen him live before so I’m looking forward to it anyways! Also, there’s Morton Subotnick playing before him!

Not at all being critical about the music! It’s a great album and it sounded amazing at the venue. I don’t really mind how he performed it (or not). The visuals were so striking and apparent that after a little while they became distracting, and it felt as if Alessandro was supporting a someone’s films, not the other way around.

I’ve watched Ciani play live and as a modular performer it’s like watching a master craftsman at work. It is very much a live performance, which has a structure, but is different each time as she improvises within each part. I would be pretty scared to perform with a Buchla as they are unstable and tricky to work with. On top of that, she’s doing it in quad, and controlling that from the Buchla at the same time. Just the technical side alone is complex and she is a master at playing live.

To be fair to Cortini, his albums are great and I’ve read interviews were he admits he can’t perform them live freely because of the equipment he used to make them. He used EMS Synthi’s and Buchla 200 for a lot of those last 2 albums. He fades in / out stems and parts of tracks on a 4 track tape recorder. He uses the 4 track as an instrument and plays with the pitch and effects for playing live.

Having said that, I would still prefer to see Ciani play, any day of the week, because imo what she is doing is a real live performance as opposed to playing backing tracks / stems or triggering clips.

Putting on my music critic hat for a minute–a dangerous thing for any musician–I don’t see the attraction to Ciani’s performances in the year 2019. She is of course a pioneer and an important historical figure in electronic music, but now there are probably scores of people in this forum alone that make better use of the gear in live shows. I find a good deal of her recorded work to be repugnant “new age” in the most pejorative usage of the term. Rarely have I been so disappointed after triumphantly bringing home obscure vinyl.

There’s no accounting for taste–some people even like my bleeps and bloops–so this shouldn’t be taken as disparagement of any of Ciani’s fans.

I’ve seen Cortini live twice, both shows being in support of the first Sonoio album in 2011. He’s an engaging performer, but it’s much less “live” than some people want. I prefer to listen to his recorded work, especially Modwheelmood. I liked Lichens (Robert A.A. Lowe) and David Scott Stone better at the first show, but I liked Cortini better than Ladytron at the second show. YMMV

To be fair, the way Ciani uses 251E into MARF is taking pre-recorded sequence voltages and doing live manipulations of the stored material.

Anyone who uses pre-recorded tape material is going to be constrained in some degree toward backing track or stem manipulation. Fundamentally is there really much difference between that and what Ciani is doing with that particular approach? Not saying Cortini is the best practitioner vs Ciani.

Anyone who uses pre-recorded tape material is going to be constrained in some degree toward backing track or stem manipulation. Fundamentally is there really much difference between that and what Ciani is doing with that particular approach?

Yes there’s a big difference. With the way he uses tape in that performance he is constrained to adjusting a handful of parameters - faders, eq, master pitch, change cassette tape, and effects parameters. He doesn’t have access to notes, gates, envelopes etc. Because he’s using stems on tape he’s very limited to what he can do. To put it more bluntly, hes playing a DJ set with a tape recorder, instead of decks. He is doing no more than what a DJ is doiing by fading in / out tracks adjusting the eq and remixing his own material.

The fundamental difference is he doesn’t have access to the individual parameters / individual components of the music because they are sitting in his studio and are not on stage. He has made a studio album then tried to work out how to perform that studio album live based on his NIN experience.

With Ciani, what she has done is the complete opposite. She hasn’t made the album first. She made the material specifically to play live. This is something that resonates with me personally, because that is exactly what I did, with my last album. She is also willing to take the actual gear she made the music with and play it live. She hasn’t made an album first and tried to work out afterwords how to perform it live.

To be fair, the way Ciani uses 251E into MARF is taking pre-recorded sequence voltages and doing live manipulations of the stored material.

One thing to point out is she uses very few sequences and she rearranges them dozens of ways, on the fly, live. So the sequence data is used as a starting point for improvisation. She also playing with a huge amount of parameters >70+ individual components, note, gate, envelope shape, timbre for variation. If you watch her play, it’s like watching someone spinning plates. She reacts to changes and anticipates things sliding in the wrong direction and jumps in. That’s what makes it enjoyable to me, it’s the unpredictability, you know it’s a true live performance and that it is going to be unique each time. She does’t use any prerecorded material - there is no safety net.

If you watch the first 10 minutes of this you’ll realise she is doing a whole lot more than playing preset sequences. One thing not mentioned is she also does play the lead synth sections of the gig on her iPad. To me this a real electronic live performance…and it’s in quad so the sounds are spinning around the room. Very few artists play in quad and she is a pioneer in that field also.

Btw I do agree with @jnoble regarding Ciani’s studio output, which is very patchy. I think I may also have the rare vinyl of one of her concerts and it was terrible. I have yet to hear a studio album that does justice to her live work. Her 1974 concerts is very good, but the recordings aren’t the best. However, the liner notes alone are worth the buy as it’s contains all her original patch notes and is practically a manual for the MARF sequencer she uses. Cortini’s studio stuff is the opposite. His output is solid and consistent.

“Not saying Cortini is the best practitioner vs Ciani”

You left that part out.

I was speaking to the live manipulation of preset material in tape performances in general as not being fundamentally different from manipulating voltages.

Ciani definitely has performances that sound alike, when she improvises on the same stored sequences with the same workflow, you can hear on youtube too. She does use pre-recorded material, it’s the stored voltages which she samples with sliders. I tried recreating this with Mutable Stages.

The rest you said about manipulation itself I realize, I described the basic patch after all. I understand how she does it, you don’t need to explain that to me. I think it’s great!

I just don’t agree that it is completely fresh and purely improvised every time (much like jazz), inherently more so than stem approach. Cortini is not the best example, put another way.