Oh. Yes. Tested the cable with another teensy - that works. Should have mentioned that.

Test with multimeter for continuity between power and gnd pins - the 3-4 closest to the usb plug. (This would be bad)

If you can , post some HD photos of the board, both sides (daylight if possible)

So i’ve been thinking about some hardware additions, Namely:

Add a mini USB PTH connector under the teensy on the bottom side. The micro is a disaster waiting to happen, it doesnt take much to tear it off and there is plenty of room (these are about 4mm tall) between the bottom panel and PCB if youre using 6mm standoffs. It would run parallel and would be optional. Granted its a bit hacky since there are no holes for the USB pins on the teensy and you would have solder wires to the pads

I havent looked at whats needed but is the 32bit teensy really needed here? The 8bit one/32U4 is cheaper and would allow a full size USB plug. (I havent looked if the ADC will cut it, just musing at this point) 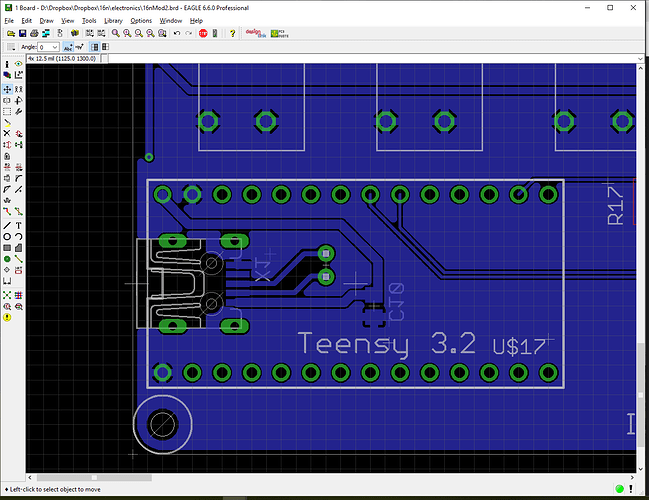 hi! thank you for offering help - while preparing to take pictures, I discovered something below one of the 8 small opamps that might have been shorting something.

After applying some wick and some hot air, now my teensy lives!

So; apparently (and this IS my first smd project), i’ve done a really shoddy job of soldering… Slider 14 is dead. And moving slider 1 OR 2 results in both sliders producing the same midi data… All the rest works as expected!!!
Is it the soldering of the opamps or the larger chip I should be looking at now, then?

Slider 14 is dead. And moving slider 1 OR 2 results in both sliders producing the same midi data… All the rest works as expected!!!
Is it the soldering of the opamps or the larger chip I should be looking at now, then?

Yeah - it sounds like this might be other solder bridges - if it’s MIDI related - it’s probably the MUX chip not the op-amps.

I seemed had one problem (midi) and one opamp (slider 14) problem.

Now, almost everything works - but only remaining problem is slider 14 works - but in the extreme upper position suddenly outputs 0! It rises as it should during the slide, but at the top end, it suddenly goes from 5v to 0. If I nudge it down a bit, it jumps back up. It happens on both voltage and midi out.

The value jumping at the end-point might indicate the fader is bad/faulty, but I’ve not run into this before.

Just finished flashing and testing mine. Something that might help others:
First I had to roll back my arduino install (I’m on OSX) to 1.8.5 to be able to install Teensyduino, then I was getting compile errors (“error compiling for board teensy etc.”) This was solved by re-installing forty seven effects midi library via the library manager, and waspinator’s CD74HC4067 library (not included on a clean install, at least for me)

So here are the new additions: mini USB opposite the teensy, switch to turn the pulls ups on/off 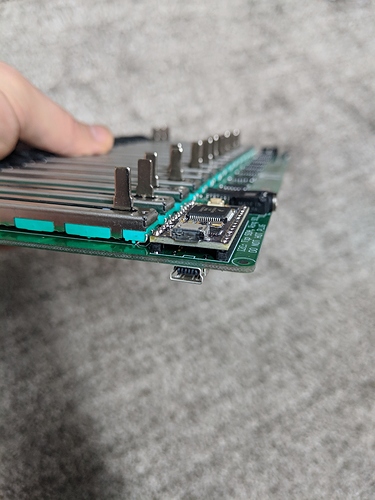 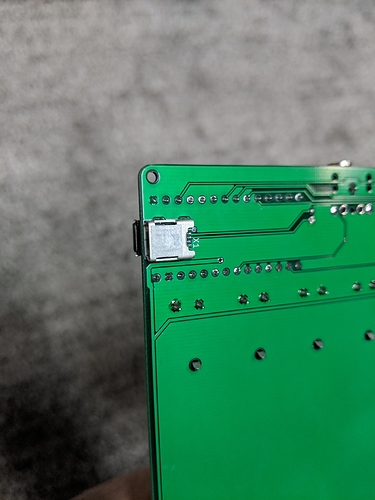 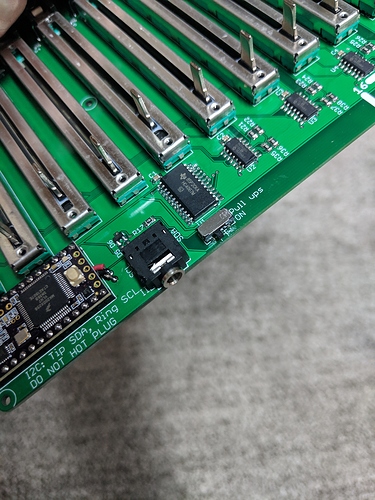 Are these changes on the devices that recently left your hands?

no, its a prototype. It’s really a intermediate device to test some new parts and features, I really want to get rid of the teensy and just get the halfkay chip and ARM

Yes. I think any revision around USB should have onboard MCU.

I’ve currently got another project that, as of last week, has a SAMD21 on it - and manifests either as a board you can flash from inside Arduino, but also as a USB drive you can just drag a UF2 firmware onto, meaning most users don’t need Arduino to update firmware.

This would be a very good fit for overhauling the faderbox, and my preferred solution so far. My main remaining question would be getting I2C up and running on it.

I am not an engineer nor a designer and need your help. I have been looking for a new simple MIDI fader controller for a while now and everything I find has too many bells and whistles. I currently use the FaderMaster Pro for my work in the film industry. So far the 16n is close to my wish list but the original Sixteen-n design is pretty fucking close to what I have in mind. A couple of things I wish were different.

Now maybe this glass of whisky is fueling some stupid pipe dream but I really do think this would be a great idea. The sixteen n eagle files are available and probable easy to adjust. I simply don’t know how the fuck to do it though. If anyone is interested in a simple yet great looking fader controller and interested in helping make this thing reality, I would be totally stoked.

Any suggestions and advice would be appreciated.

I don’t see why you’d need to change eagle files for anything. I think this non-engineer solution accomplishes everything you need:

Am I missing anything?

Also, regarding the cable on the side getting in the way: If you don’t need to constantly plug it in/out at the device itself, you can just get an angled cable and tape it to the bottom of the 16n (assuming you gave your 16n tall enough feet). It’s what I did with one of my 16ns and it certainly doesn’t get in the way: 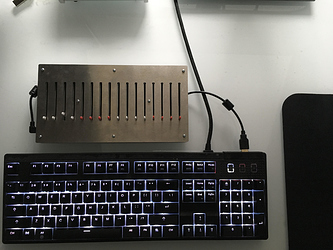 I see what you mean. Wider enclosure for the cable. I like that a-lot. The only caveat with those enclosures are that they look bland. I fucking love the look of the 16n, metal faceplate or the frosted acrylic. Oowee that’s a nice look. If only I could have them sloped.

Your suggestion is certainly something I will be taking great consideration in. Might just be the way I proceed with this build.

The KVGear Ramp Rack, small size, is about perfect for the 16n. There’s a lip at the bottom which gets in the way of the i2c jack, so I have a couple of rubber feet (not attached, just resting) under the bottom of the 16n so that will clear. With right-angle USB and i2c jacks it’s all pretty tidy.

Also, a medium ramp rack happens to be just about right for a Volca and SQ-1, and the two ramps side by side are only a little wider than my 114HP Eurorack case

Some lucky coincidences there.

I fucking love the look of the 16n, metal faceplate or the frosted acrylic. Oowee that’s a nice look. If only I could have them sloped.

welcome to the gulf that exists between “vertical stack-up of panels+circuitboards put together with standoffs” and “making enclosures”. I have thought about this before!

Because of the current design, any canted option is likely to end up wider than the current version - all the mounting points are at the very corners of the current hardware, so supporting them in a canted frame will require something at the edges; the main hardware will most likely be suspended from the top of the frame, rather than supported from below; then, the top frame will somehow be attached to sides/base separately from the hardware. However - that will put a moderate amount of weight on the eight screws in the top.

The nicest, and slimmest, alternative would be to mill out a piece of aluminium - much like the base of a monome grid - and use that as a support, the angle being built into the milled block. You could then genuinely support the whole thing from underneath, at an angle, and even mill out cable recesses.

That is a really great idea too. Similar to my idea of attaching angled feet under the board, but better. The only stupid issue I have with the board is the teensy placement. Since I use my left hand during writing to ride faders, my hand sits on the left edge and I would expect the cable would get in the way. Such a stupid thing that I am picky about!

Thats a nice idea too! Is it stable? Especially if I sit my left on the device would it stay put or would it tip to the left?