16n is a bank of faders [release thread]

Question: I got a 16n from Michigan Synth Works a few months ago - Everytime i use it to control midi, there is a lag between fader movement and result on screen. CV works fine - haven’t tried i2C yet. Anyone else have this problem?

It is technically functional, but with it not being very responsive it makes it difficult to use the midi portion in a musical manner.

“on screen” in what, specifically? do you have any other MIDI programs running in the background?

I would recommend speaking to your builder if you did not build it yourself. It should be very, very responsive.

Ableton mostly. I’ve tried controlling Norns as well and it has the same issue. I sent Michigan Synth Works a message so i guess we’ll see. I had them flash it to be i2C master so maybe that was part of the problem? Either way, the lag i experience currently is at least a full second from when i move the faders.

I2C Master shouldn’t effect the midi performance at all. And I don’t know what version of the firrmware MSW will have put on. I suggest you speak to them about this. That lag is absolutely not normal, I can supply a build of the latest official firmware that you can use Teensy Loader to put on the board without needing to compile it, to see if it’s a firmware issue, but you should speak to MSW first. 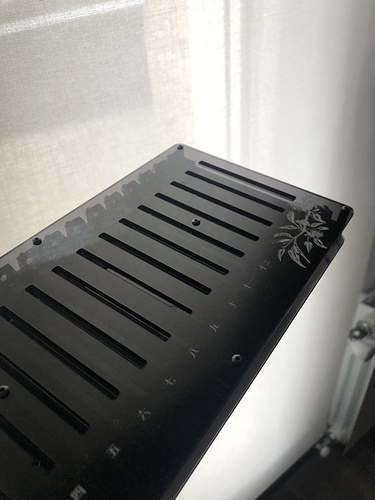 Hi all; you might be interested in the 2.0.0 firmware for 16n, which has its own thread now. Linking it here for those of you that will get an alert by me doing so…

This looks like such a nice thing to pair with the Er-301 which I am looking to buy.
The only thing is I really really don’t like the little usb port for powering it.
Would the best/easiest thing just be to put it in a bigger enclosure and have an internal adapter with usb b out?

in short, yes. The micro-USB port that powers it is there because it’s the one on the Teensy, and it’s used for data transfer as well as power.

At least one 16n-derivative design adds a mini-B USB jack to the mainboard itself, primarily for added physical integrity - the Teensy jack is not the most solid part.

Of course, the product is entirely open source, and you’re welcome to adjust the circuitboard to your own needs; there might be space to add a full-size B jack and reroute to connect to it.

@infovore
I just build the 16n (berlin version 1.4)
I have a few issues

@infovore: I just recently discovered the 16n in form of the Tesseract Sweet Sixteen faderbank, and I really like how it made my ER-301 “touchable” when connected via i2c.

The only downside: It doesn’t have enough faders. 16 are a lot, but 32 would be better.