2/5 Cool Maritime, Virons, and Stephie's Castle at Non Plus Ultra 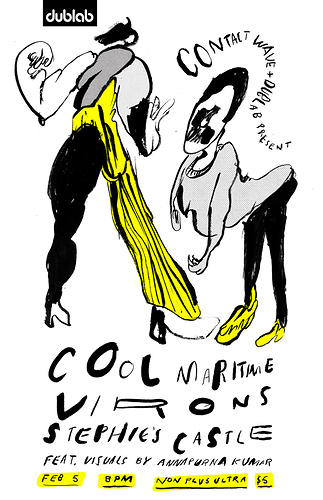 An evening of blissful wanderings and transcendent noise featuring

Cool Maritime is the New Age-inflected synthesizer project of Sean Hellfritsch. His 2016 release “Some Sort of Wave Portal,” originally as a cassette on the Leaving label, captures the serene, shimmering oceanic vibe of the coastal area between Vancouver and San Francisco, after which the project is named. Prepare to be transported to a zone of coastal bliss.

Stephie’s Castle is the solo performance project of Stephanie Cheng Smith, a composer, performer and programmer who creates interactive pieces, installations, improvisations and through-composed works. She often uses electronics, violin and light, and her latest explorations with motor arrays have been featured in the 2016 issue of Experimental Music Yearbook.

Annapurna Kumar is an internationally-shown animator and filmmaker currently based in Southern California. She is a 2017 MFA candidate at California Institute of the Arts. She has been creating and performing live visuals for musicians since 2009.

bump for the LA folks. this sunday!