some 2015 grid users have reported a high pitched noise coming from the grid when lots (and lots) of LEDs are lit up. i’ve identified the problem and a simple fix-- the problem is that in these new builds, the type of capacitor was incorrect. two ceramic capacitors were placed by the boardhouse instead of tantalum. we didn’t catch this error during inspection as the grids function perfectly well-- but for the sake of making these grids more perfect, here’s what needs to be done to reduce the potential for high frequency noise: 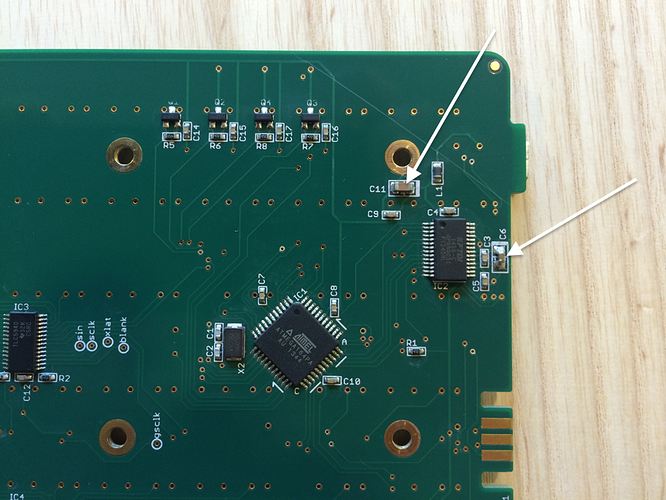 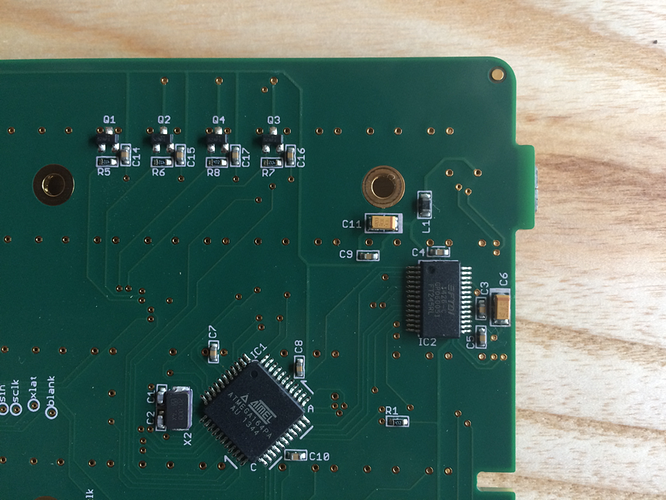 if you don’t have a soldering iron or are uncomfortable doing this mod, contact info@monome.org with your mailing address. we can discuss some options.

lastly-- if you haven’t had an issue with your grid, please don’t feel like this is an obligatory mod. there’s no functional issue with the device and the life of the hardware is by no means compromised.

all grids shipping from us in the future will have this issue corrected. all grids currently stocked at retailers will have the old ceramic capacitors. this is not a big enough deal to merit any sort of recall.

feel free to e-mail us with concerns. info@monome.org

Does this affect the grid kits as well?

i am almost completely certain the kits are fine as they are from 2014, but i’ll double check.

my kit is affected, but the noise is barely noticeable even when you listen closely. still thanks for the fixing instructions, @tehn. i’m gonna do that just for the sake of fun you get when hacking the monome

Yes my kit is affected too, doesn’t bother me much, but is a really easy fix so i’ll do it at some point

thx!!! if someone is in Madrid or Berlin and is not comfortable fixing this send me a line and i’ll help

Is this issue separate from the noise issue documented here (and probably other places):

What kind of noise are you experiencing? Does it appear as soon as you attach the grid to WW? Does it change when you turn on more lights on the grid? As you’re powering everything from the one power supply, the typical ground loop noise shouldn’t be the problem – this typically only happens when using a separate power supply for the grid where both supplies are grounded. One idea might be to try moving the WW to a different location in your case to see if that changes the noise? The Intellije…

if using a new aluminum grid, the noise may be reduced slightly. this is mostly about physical noise.

the solution in modular is still to use a Switch module.

hey, not sure if I have this problem or something else. I have a Grid I bought from Control about 3 weeks ago plugged into my White Whale. When it’s plugged in I hear a high pitched sound like at around 8K. If I press the memory button on the White Whale the sound stops. I was thinking it was a ground loop or something, but maybe it’s what you are describing here.

I just opened up my case and I have the wrong capacitors. I’m not super comfortable with a soldering iron on new gear.

email sent and thanks!

Just made the fix myself, it was not the cleanest work as I am totally inexperienced in soldering but everything seems to work fine. The difference is absolutely drastic concerning the noise (I have always been sensitive to high frequencies). It is finally a pleasure to control my modular with the grid. Anyway thanks for the perfect assistance.

I’m pretty new to SMD soldering. For my edification, if I needed to identify a loose capacitor’s capacitance value, how might I interpret the values printed on the component?

Kind of answered my own question (thanks Google!) but the use of codes on various component types varies, so I think the answer I’m personally most happy with is “use your multimeter”.

I seem to have the same issue. There is a high pitch sound around 8k hz, but once I press the memory, the noise is gone.

Should I assume that it is the capacitors? What was the fix - new capacitors?

oh no, nevermind the noise is coming out of a WW module…the more lights turn up the more noise I get…being silly sorry…

I have a friend ready to make this upgrade for me. Should I expect it to enable me to use White Whale without the Switch module? At the moment I’ve been having the LED-intensity-related noise issue from WW (output is MN Rosie), but I’m not totally clear from the thread whether this grid mod will fix it.

this is an issue with physical noise coming from the grid-- the capacitors vibrate. this should also lessen electrical noise, but modular power supplies and ground design are so different that i can’t assure it’ll be a complete fix. switch provides complete isolation.

Ah okay. I originally got referred here from my other thread asking about eurorack power. Hence the confusion.

Still, best to get the fix done I suppose.