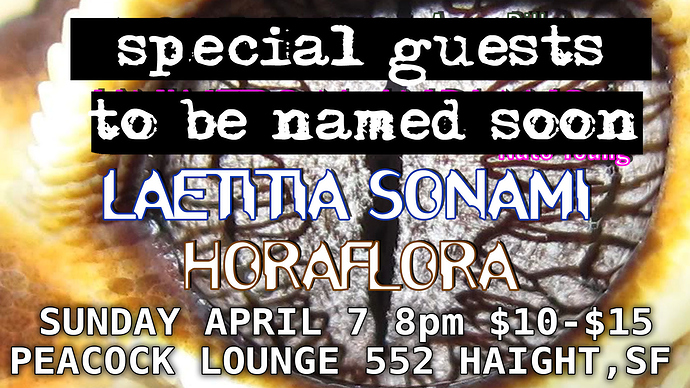 9042416E-DA0D-4849-AF70-B0AF2F28EA44.jpeg1920×1080 447 KB
So psychedelically jazzed to get on this bill, and get back to playing as Horaflora! Thanks to Resipiscent Records for pushing me onto a live stage, been a while since I Horaflora’d properly,and hope to present a fairly fantastic rendition for (names redacted), who have come from so far away to perform/play, as well at Laeticia, whom I have been inspired by time and again!
(Secret Special Guests)
Laeticia Sonami
Horaflora
Sunday April 7th, 8pm
$10 - $15
PeacockLounge
552 Haight (@fillmore)

…:more details soon:…
Laetitia Sonami
Discovery narrows, trace contours hint at sensibilities that deepen as edges, tipping our balance, opening a course for those brave enough to pursue far from beaten paths. Along arabesque edges of her discovery, Laetitia Sonami pilots a bathysphere, plunging through depths all her own. Building her music meant building more than just an instrument capable of new sounds, which she has, it meant growing, extending her body to entwine, tentacular, through whole oceans. “In ancient times when we peered endlessly into hazy green screens flickering like glow worms, adding a bit of flesh was irresistable” she recalls. Inventing “The Lady’s Glove” as early as 1991, Sonami would come to “throw the gauntlet and leave some of the clamour behind” in order “to explore some of its attractive weaknesses…the boundaries of its expression, the pushback on one’s intent.” Narrow your wanderings to join her inside the Peacock Lounge. Don’t bother taking a big breath first, there’s plenty down there.
http://sonami.net/

Horaflora
Weird Ear Records co-founder Raub Roy first grappled with toothbrush motors, plastic sack subwoofers, and balloon-driven mouthpieces set atop frame-drums to create a sound like crazed baby turtles battling an infinite friction of analog sand. In recent years, his Scy1e project took those same sensibilities into a realm of post-analogue instrumentation, propelling him with newfound speed and buoyancy through corkscrew sines. But what if those worlds were to combine, and crazed jumbo turtles were armed with midi-controlled highspeed corkscrews? What then?! Don’t miss this command performance, the return of the future Horaflora!

no trying to guess the special guest please<<

Love Laeticia! Wish I could be there…

The Body Lag / Craedle Calls album is the only one in my collection that I own two (2) copies of. It’s that good, I just had to have the wonderful feeling of buying it twice. I hope there are new Horaflora tapes soon!