It was suggested to start a separate discussion from Eurorack: discussion, advice, learning, questions

In this thread we can discuss “large-format” modular. Comparisons to eurorack, advice, planning systems, questions, etc. You’re also welcome to share videos, pictures, etc. if you feel it contributes something of value.

Modular Grid does provide many of these formats as an option.

A lot of the same patching techniques used in eurorack will also apply here, so feel free to discuss ideas and techniques from your experience there if you feel it applies. Same goes for Moogerfoogers and similar modules (CP-251/VX-351/VX-352) and the like.

Rock n Roll, @cubis! - I have no questions, except to offer praise for the format. Happy to be a resource in this thread, as I’m sure other 5U users here will also say the same.

So torn on the last 2 slots in my dotcom system. Don’t know which two I should go with: logic, sequential switch, quad envelopes, mixer, octal vca… 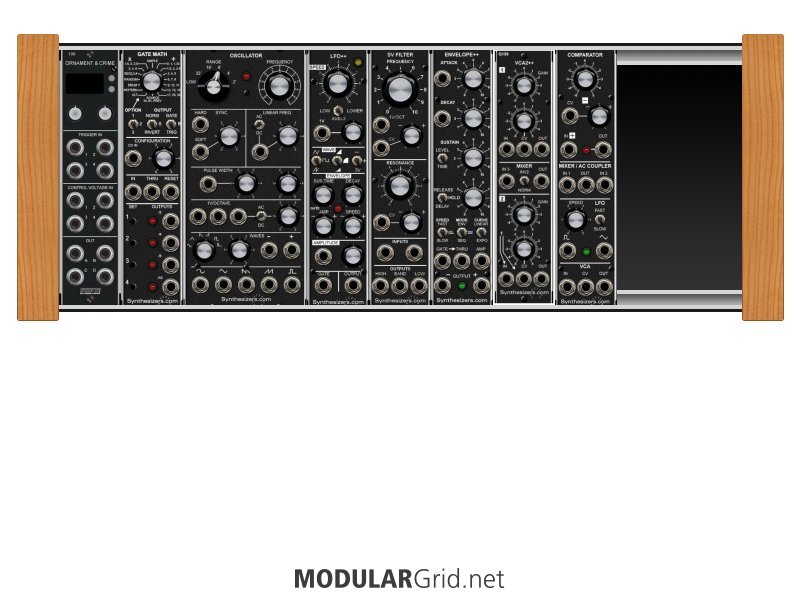 Why I like the idea of a logic module? I want to be able to generate gates with random/variable lengths. A stream of short random gates (which I’ve seen many ideas for), can be inverted for longer random gates. Then with AND/OR logic I can quantize it to be on beat. I like the idea of sequential switches to alternate between different patterns. Or to reroute modulation, etc.

Considering I have a ton of options for producing gates, envelopes would be useful. And I am sure I could find a ton of uses for simple vcas (the quantized stream of gates can be done with a vca, for example).

Perhaps consider a MI Kinks. You get AND, OR, as well as a dedicated sample and hold with noise source (always useful) and a rectifier+inverter.

Oh both modules seem awesome but I have an MU/5U system. Kinks is in nearly every euro system I play with on modulargrid though.

In some ways the MU builds are simplified, no adding up HP, worrying about power draws, etc. I have 2 module slots available, the end. It’s nice for simplicity and uniformity but doesn’t let me squeeze in extra modules based on widths.

Basically it boils down to: if you can only choose N functions/utilities to add to a system, what are they going to be? There’s pros and cons to that concept.

I might get a baby euro case at some point to complement. Too many cool things in Eurorack.

Ah! Sorry, my bad. Completely missed it being 5U.

This is a Eurorack thread, not a 5U thread, but I think the answer is pretty obvious: you should leave those two module slots empty. Once you’re familiar with what you can and cannot do with the other modules, you’ll know what you want.

Perhaps start a 5U/MU/MOTM thread? Will probably be less activity than euro, but Serge, Buchla, and Bugbrand all have semi-active threads. If I ever get into DIY would totally build a 5U system for the home, because the ergonomics are glorious compared to euro (got a couple chances to play a Moog system before).

Yeah, I know this is a Eurorack thread, so I tried to make my question vague according to module features rather than specific module suggestions. In the grand scheme modular is modular so I figured it wouldn’t be received poorly. Sorry if I have been an inconvenience.

Solid advice for simply waiting though. Just thought I’d put feelers out so I could explore module options based on functionality. So far from my patches I am learning that I certainly couldn’t go wrong with more VCAs or more gate processing tools like envelopes, synced LFOs, sequential switches, logic modules, etc. I’ll just keep messing about for a while, see what I can’t get around.

I’ve always been hesitant to start threads on forums, especially when I hadn’t started one on the forum before. But it’s a good idea. Even if it’s not an active one, it’ll be useful for future users.

Yeah large format is pretty great. You’ll probably laugh, but I eventually decided on this one because I already had 3 Moogerfoogers and a CP-251 and thought it would be nice to keep with the large jacks and knobs that I grew to love (and already had a ton of cables for)

Don’t be hesitant! It’s just a row in a database somewhere after all.

Regarding those open spaces, I’d suggest a trapezoid generator. Either a Free State FX - FSFX 105, which I love immediately for its aesthetic:

or STG’s envelope maker, which offers trapezoid and even other cool shapes and functions:

I saw that FSFX trapezoid generator in passing, but didn’t immediately know what that was about and didn’t look into it very much. Looks really really interesting. Will have to look further. Looks like it’s 2 MU wide, but it does tick 2 boxes: vca and envelope.

The STG ADSR is also really cool. I spoke with him on Instagram a few times. Currently he’s working on rolling out both a unique 1 MU oscillator and a Eurorack power supply board for Moog 60 hp cases. He has a really cool sequential switch available and might be trying to finalize his logic module this year (I asked him about the logic module because it’s already on modulargrid)

For the rest two units space I can recommend one of the top brands Moog clone filter. In MU circuit and components make sense. I have only Mos-Lab 904 filter but Synth-Werk will be great too. Really fat and big sound

For EG this is very interesting https://corsynth.com/home/modules/c106vcad
(But I still prefer to send envelopes to MU from Zadar)

Out of curiosity who are the most active 5U manufacturers these days (outside of Moog and MU)?

I have a fairly substantial system which is strong in the oscillator/filter space but weaker in the control realm. More attenuators and mixers would help, as would VCAs, but I am curious if anyone is doing more unusual or novel control modules in 5U.

The system mostly MOTM with Cyndustries, Encore, and Blacet mixed in for flavor.

Modcan has some great looking stuff but I think they are a bit inactive due to illness/injury. SynthCube sells a lot of modules for MOTM, both pre-assembled and diy kits.

Analog Craftsman does both MU and MOTM. They have some very interesting modules. Their acNeuron is very confusing to me but quite intriguing.

Would love to see a picture of your system! I only have 1 oscillator on my little baby, with an lfo++ that can be used as a 2nd one, and a Moogerfooger Ring Mod that can be a third. I definitely venture on the side of modulation and event triggering vs raw sound generation power.

I have Mos-Lab system, some modules from Synth-Werk. Both are great builders and precise clones. I have not heard same sound in euro and they both blow off the dotcom from the moog filters and oscs. Warning - 901 filters are really unstable abd dont track precise more than 3.5 octaves (i thought before that i can resolve this by silent way and experss sleepers , but there is no chance).

Oakley and Moon have some good modules , Corsynth provides new ideas(not clones) - my personal respect for this.

I have great Ms20 clone from Megaohm

Analog Craftsman does both MU and MOTM. They have some very interesting modules. Their acNeuron is very confusing to me but quite intriguing.

Thanks for this - I just took a look at the acNeuron again and it looks like it would be a great way to inject more controlled chaos in the system. That plus their 5x attenuator module would probably go a long way toward discovering new textures. I have the Analog Craftsman acQA/R and 4x instrument interface which is also handy (and well built).

Would love to see a picture of your system! I only have 1 oscillator on my little baby, with an lfo++ that can be used as a 2nd one, and a Moogerfooger Ring Mod that can be a third.

I’ll look around for a picture (I’m away from home at the moment). My 5U system is honestly kind of obnoxiously large (like ~50 modules large). Most of it was built from kits and grew over the course of ten or more years. In retrospect I made the mistake (like many others) of acquiring without taking the time to really decide what kind of sounds I wanted to create or taking the time to fully explore what I had before moving to the next thing. This is a long winded way of saying starting with a little system like you have and enjoying it throughly before moving to expand is good!

The .com, MOTM, etc don’t seem to be as convincing in terms of either features or sound.

It’s funny - compared to the eurorack system which lives next to the my MOTM system the MOTM has many fewer features and is much simpler - yet after neglecting the MOTM for a few years and returning to it some months back I was happy to rediscover the simple richness that it has. Cross patching the two systems is what I really need to spend more time exploring.

The .com, MOTM, etc don’t seem to be as convincing in terms of either features or sound.

Convincing how? As a moog clone? Maybe not, but thats not really what I’m after. I’ll admit that the standard old school vintage-moog-like modules are “ok” but some of dotcom’s "++/specialty"modules are actually pretty great.

The LFO++ is awesome. Has its own envelope and vca for controlling speed and/or amplitude. Very useful on standard lfo duty. Full range pitch tracking too, so it’s basically a synth voice if you need it.

The envelope++ is super flexible: modes for a standard+inverted output, dual AD envelopes, or a4 step sequencer complete with semitone quantizer. It can also be looped.

I like the SV Filter but seeing as I use the LPF the most, I’d probably opt for something else if I were to do it again. I’ve had plenty of moog style filters (and still have my MF-101), so I’d probably go with an STG Soundlabs Sea Devils filter (EMS Synthi style 3-pole filter). Sounds gnarly. His Post Lawsuit has a nice sound too. His sequential switch is also the nicest looking sequential switch I’ve seen in MU.

I will admit Corsynth has been coming out with cool, unique stuff like their various envelope designs and the lofi machine. Their new drum modules seem fun too. Even their Assistants utility is pretty useful. Usually converting bipolar to unipolar takes a bit more work, like applying an offset and then attenuation, so having it in a simple in/out is nice.

Synthetic Soundlabs has some interesting offerings as well, like the seqwencer. And good solid utilities too, like their 1 MU octal vca or quad lfo. Also a 2 MU step sequencer.

Finally, Lower West Side Studios. They make a ton of open source projects. Lots of CGS and Serge designs. Loads of cool modules. Willing to do custom work for relatively cheap.

This is a long winded way of saying starting with a little system like you have and enjoying it throughly before moving to expand is good!

Yes it absolutely is, but I fear there is a way to go too far the other way lol.

I’ve done a lot of research and I’m STILL not sure what to do. In fact I’m a little bit less sure the more I read about all the cool stuff out. Kind of have option paralysis.