A little box I made this weekend, inspired by Folktek's Illuminist Garden

Hello!
I thought you all may enjoy seeing this little DIY project I made this weekend. I had been looking at how to incorporate more piezo gizmos into my modular setup, after wanting more random behavior from tapping or scraping something that was external. I then came across the Folktek boxes… They are much more sophisticated but similar in ethos to what I wanted to try to make. I used an old cigar box, that I reinforced in places, added felt feet to, and thin brass plates to help reflect, direct some of the vibrating to the numerous piezos I attached to the inside lid. The Folktek boxes have the wire “branches” come straight out of a top plate, and while I liked that idea, I wanted to try something more experimental and more modifiable. So I created little brass tube “tree trunks” that run through both top and bottom plates, and have a piezo glued to the bottom, so anything placed within the tube makes direct contact with the piezo element. I want to have a few more outputs from the box, with a few running specifically to certain “trunks” so one trunk could act as a cv source (through my cv bus or through ears) and the other a sound, even though there will be bleed… I have been having quite a bit of fun with it and it was a pretty easy build. I jokingly call it the “Complex Activity Tactile Input Device” after putting a big Buchla-esque Davies knob on it… I hope you all enjoy it!

Thanks to Folktek for the inspiration!

106 Likes, 6 Comments - Sean Curtis Patrick (@seancurtispatrick) on Instagram: “Weekend Project: I have been quite interested in @folktek boxes lately but have never seen one in…” 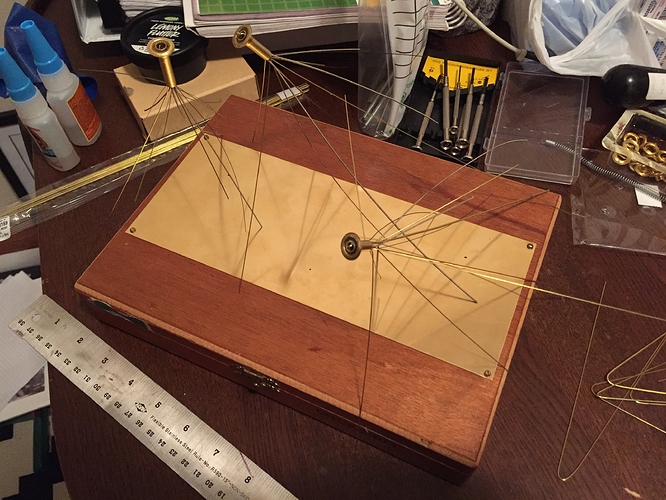 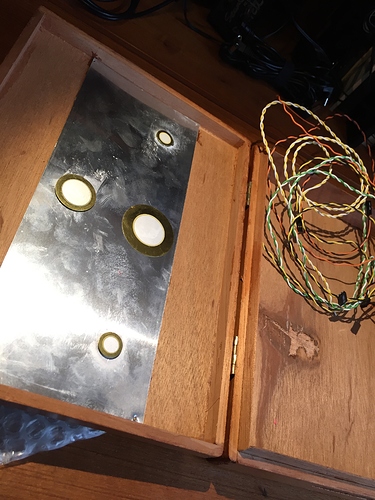 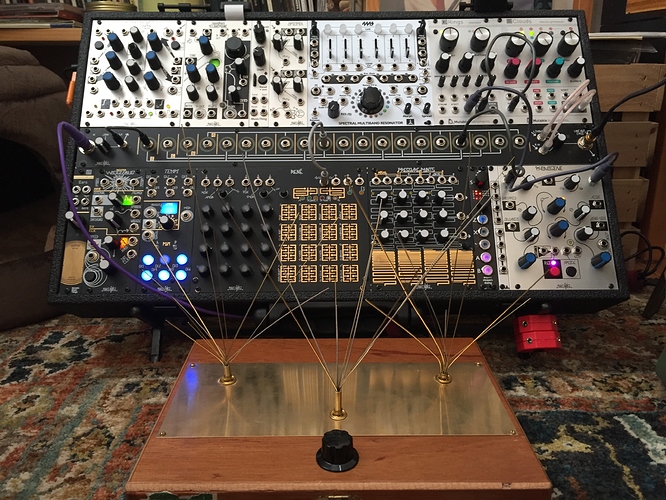 This is nice. Did you pre-amp the piezo’s and is the delay exterior to the unit? I was curious how you fixed the wires in the tube. they just sort of wedged in there - i dont see any grub screws. the build quality looks really good.

Thanks! The piezos are totally un-amped. Whatever device it will plug into will have the kind of juice to increase gain, so just kept it passive. Delay is coming from the MN Phonogene or MI Clouds. The wires are held in by their own tension in the 85deg bend I put in them. longer the “trunk” the more tension there is. The shortest trunk makes them very loose and they just can spin around. Thats by design though. I want to be able to put anything I want in there, like a stick or a flower or something… I am pretty proud of the build quality actually, so thanks for that!

Heyyy! This is really nice! I love it! Did you put resistors between the + and gnd of the piezos?

Thanks! No, no pull down resistors were used. Everything is in parallel till a few more jacks arrive in the mail. At that point, I think I may have a few break off to another jack, thus allowing for even more craziness. Actually, at that point, I may add pull downs…

Hey man. What did you use for the wire. I’ve finished one similar and I think I’ve chosen strings that are too thin.

I used nice, thin brass rods of varying gauge and old guitar strings. the rods are quite rigid vs the strings which bounce around more. Another reason I wanted to have mine be a modifiable hollow “trunks”, so I could find what worked and what didnt without building a prototype.

Cool thanks. I had some light guaged guitar strings in my cupboard so used them, but i’m not reallly happy with the variety of sounds From them. 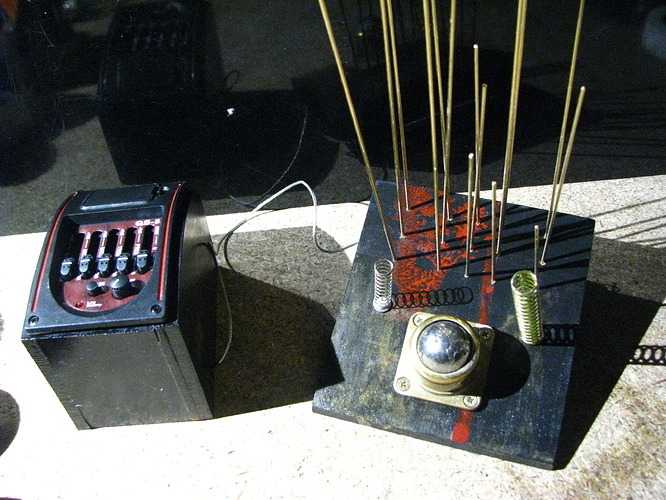 I use those guitar pre amp eq’s - the obscenely cheap ones from china. My stuff is usually quite distressed / junkyard but they dont sound lo fi at all. Obviously they are not fishman quality.

hammering brass rod into mdf here was only partly sucessful - only about half og the rods ping nicely. the springs and old coaster sound great.

by the way ssemblr - forgot to say how much i liked your sound on these clips.

Oddly, considering how they used no synths, the first clip reminds me a lot of some of Velvet Underground’s/Lou Reed’s more anarchic moments, and the second reminds me of early Sonic Youth.

I’d LOVE to be able to get sounds like that out of a synth rig.

thanks so much. funny enough, there isnt much synth-ing going on here, mainly just reverb and delay through clouds and the PG. It does work very well with triggering things though. I am going to be making more of these that have more outputs and a bit more complexity soon! Quite excited to begin!

there isnt much synth-ing going on here

Yeah, I suppose not. I guess it actually isn’t surprising that it resembles a racket of distressed electric guitars, given that the source is a construct of resonant wood body, thin metal parts, err, guitar strings, etc.!

Would you mind posting the link/source for the piezos; a model or name, etc.?

thanks. the piezos i used here are just from a big 20pack i bought on ebay from korea years ago. i buy them without wires as well. should be around 10 bucks with shipping for a dozen or so… think thats about it!

I am curious about the pull down resistor mentioned in a few of the posts. Is this just for the triggering outputs? or for the audio output as well. I have never used them - neither Bart Hopkins or Nicolas Collins mention doing this in their books. ( I dont think) - my reference manuals for this kind of thing. Maybe I am solving the same problem in an acoustic way. On metal i use a sliver of wood between the metal and the piezo this takes out some of the peaking and overload- and a bit of treble too.(wooden chip forks work well) Collins recommends 2 coats of plastidip - a thick spongy double sided tape also helps.

This has made me curious - What value R would you use? something quite high 1M or something like that??

Piezos in this format aren’t sold branded - i just get the batches off ebay too- or pull apart buzzers. I would definitely get ones with wires as they are hard to solder. you need a good iron.

Another vote for bulk buying piezos on ebay.

pull downs tend to limit the properties of a piezo and make it more into an “on/off type” situation vs a very open, unobstructed frequency range. i learned that just by messing around years ago with components and then found there is an actual term for that! what you can learn by messing around!

in terms of what resistance, i would just go with what works best. you all probably have a little batch of odds and ends to experiment with. i did not use a shim with the piezos and do not plan to for this box and future ones as i want the overload you mention. i want that direct contact. Indeed! Get a good iron too!

40w Wellers are like $20.00! i would like to learn how to make a simple but clean preamp but that can come later…

vers II prototype. not quite done and some of this was dry fit so no sound. i think looks pretty neat though!

That’s a nice looking box - where did you get it?

They are Hammond enclosures from the Endangered Audio Research AD4096 delay pedal. Around the size of the EXH Cathedral or Memory Man. I bought all nine of them though.

Here are the three proposed designs… 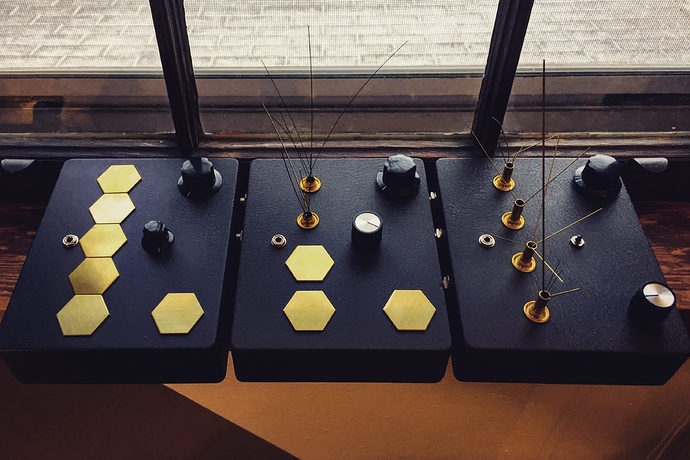