Hello hello,
I’ve just soldered up the prototype of a busboard I’ve been working on for a little while and am rather happy to say it works rather nicely indeed. 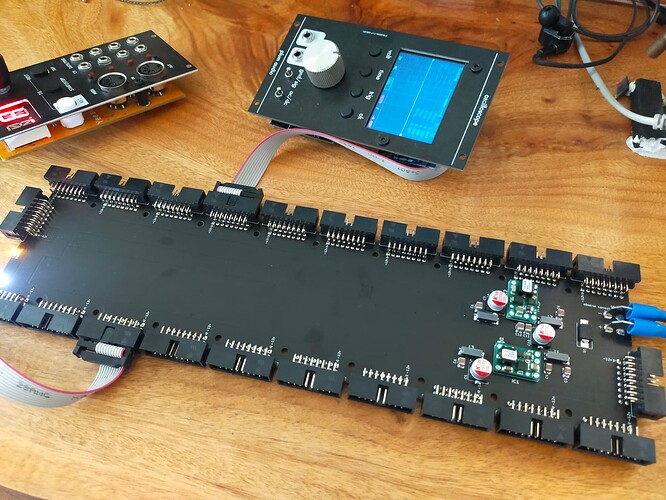 It uses a couple of DC-DC converters to provide a bipolar 12v supply from a 15.5 to 18.5v DC brick. There’s no 5v rail as…I don’t have any 5v modules, basically. Modern modules now use on-board 5v regulators, so I relegated it to the rubbish bin.

I designed it with 3 primary considerations:

1 and 2 were easy to achieve - the parts cost is about 50 dollars excluding the headers/power brick.
The height of the board at its maximum is 12mm. It would be 10mm if I hadn’t used insulated spade connectors. You could always directly solder wires to the holes for the faston terminals if you really wanted to get it as low as possible, I suppose, but I like tab terminals. It’s designed to be mounted with the components on the underside, although either orientation is fine.

3 on my list is ongoing as I haven’t had a chance to measure the ripple using my oscilloscope apart from a rudimentary check of the +ve rail which came to about 10mVp-p. I need to fully stress test the board at max current draw though before I can be sure of the performance. According to my calculations and the datasheets for the converters, it should be pretty good as I used their recommended pi filter on the output. I also added EMI filtering so it shouldn’t cause any radiated EMI.

Anyway, it’s still in its prototyping stage, but I thought I’d announce it to see what people think. Once it’s finalised, I’ll probably make the PCBs available.

22 connections nice! I like it, how thick is the PCB/copper? Star grounded pattern? I’d definitely pick up one of your spare boards on the final iteration.

Thanks!
The PCB is a vanilla 1.6mm job, hence the overkill 18 mounting holes to negate any flex. I originally wanted to do this as a 4-layer board, but unless I’m planning on making a shedload of them, it just comes out as prohibitively expensive for such a large board. Maybe could do a “deluxe” version, but then it slowly gets into the realm of “You may as well buy a board” territory. The goal here is maximum stinginess!
Regarding layout, I’m using a solid ground plane on the bottom layer with stitching to a large ground section on the top to get as much ground coverage as possible.
Fingers crossed the tests come out good!
Edit: It’s almost 2am here but I wanted to see how it performs, so I grabbed a handful of modules (about 300mA worth) and tested the ripple - 8mVp-p, which is better than I expected. No doubt will go up with a bigger load, but still, what a relief!
Right, off to bed. Cheerio!

Edit:
Tested at realistic levels (6U 84HP case filled with a mix of digital and analogue modules)
These are the ripple measurements at 1149mA +ve draw and 400mA -ve draw:
Actually hard to see but it says 9.39mV for the ripple on the positive line: 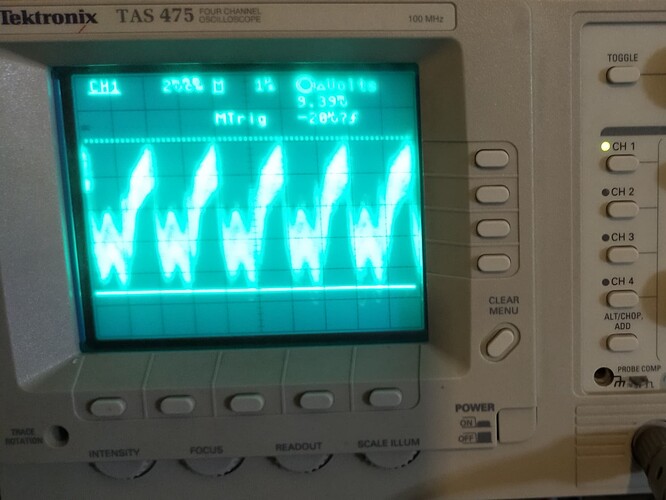 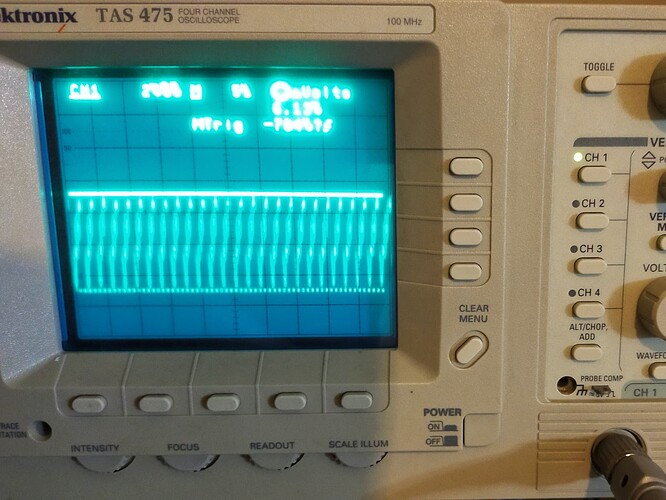