A Topic for Patchbays

Here’s a topic to discuss the humble patchbay, how we configure them, what we like about them etc.

It seems I’ve moved studio/configurations enough that I’ve redone my patchbay system once every 8 months for the past couple years. 3 of those dbx48s wired every which way for my hybrid setup.

With my latest move I’ve finally committed to TT/bantam; if the Fedex

‍♀ is good to me I might have them by the weekend (anyone looking for a variety of TRS cables please hit me up haha).

One of the things I love about a patchbay is when the system flows easily but can quickly reconfigure, to explore.

One of the things that drives me crazy about patchbays is figuring out where to stuff the inevitable 3 or 4 inputs/outputs that don’t fit in the standard over/under because I’ve run out of space.

What’s your theory of patchbay design? Do you use them mostly in record or mix or some other way? 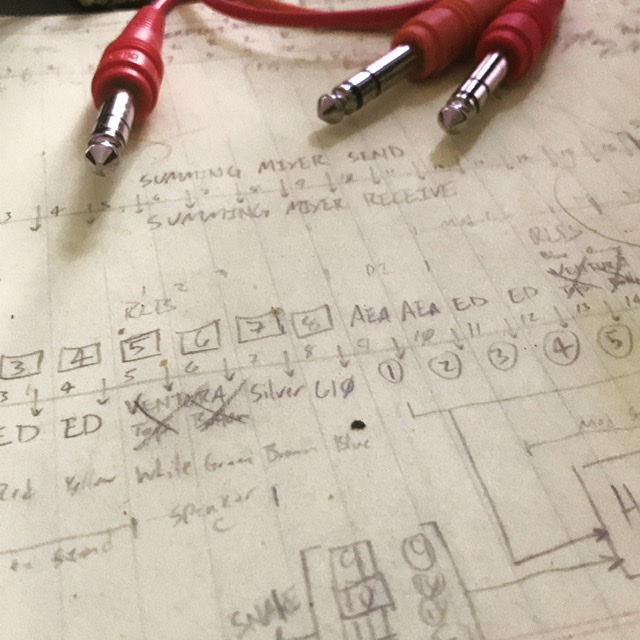 What’s your theory of patchbay design?

I have 3 patch bays immediately under my rack-mounted mixer. Almost all my gear goes to/from the patch bay rather than directly to the mixer.

I figured out a default path from gear to mixer and use semi-normalling for those connections. Additional connections are grouped by the next most likely connection scenario. I also try to optimize for cable paths behind the patch bays, so that cables from looms are connected in a logical order. The three bays have vertical as well as horizontal grouping, so that mixer inserts and processor connections are on the left side, instrument outputs and mixer inputs are in the middle, and aux sends & returns and effects connections are on the right.

I use the Samson units that have the switches on the front, but only because I don’t know any better.

I spent 10,000 hours cutting and pasting in colour-coded spreadsheets working it out and I never want to move anything in my setup ever again.

I always have more inputs than outputs. I just connect them to unused points and disable any normalisation in the patchbay. I’ve got three patchbays and the third one is unnormalised connections to gear that is used less often ( for example the second set of outputs on a K5000 synth).

At home I’ve got a simple patch bay that just keeps from the back at home. The studio I work at though is a while other beast and I actually ended up soldering up my own. Total nightmare but far cheaper than DB-25. We pretty much just use it to go from the board to the other two rooms. One side is normalized, the other not so much. But how else are you going to get 96 points in 2U?!

I recently posted this in the mixers and interfaces thread (if a mod wants to move it here, that may be a good idea since a discussion really never developed over there):

So I decided I needed a schematic to help me make some long term decisions about where I was headed with all of this and exactly how much money it would take to get things setup and organized. It’s certainly a worthwhile exercise. In the end, I made some more decisions: 3 snakes: one for mics, one for things on the left, one for things on the right. A new interface is next: the basic problem I’m trying to solve is how to use the gear I have and track more than 2 or 3 instruments/vocals at a … 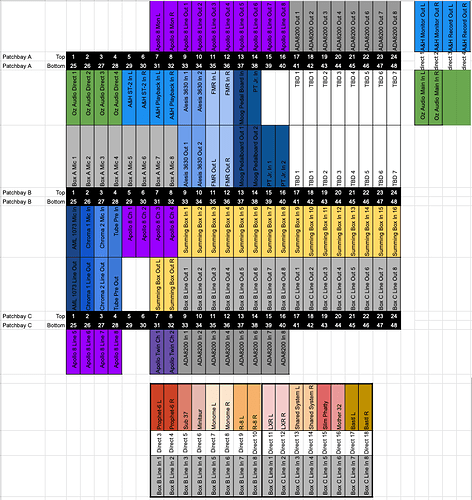 Because my patchbays are more set and forget, I opted to skip TT / bantam gear and just get good quality XLR and combi jack models. Specifically, these, which are great:

Because these are essentially just pass-through devices, it’s also very simple, so I don’t have to wrap my brain around different normalling schemes. Less flexible, but much easier to follow. I’m really just bringing all the connections from the back of my gear around to the front.

This has also been v. useful:

I also made the investment in a gazillion high quality patch cables (neutrik, mogami) in varying lengths, and varying colours, which has been totally worth it. Not having to worry about dodgy cables ever is well worth the expense.

Well, when the patch cables cost ~$20 each one becomes highly motivated to use as few as possible

I know… I had a little regret once I got them but I was able to buy all three patch bays for less than $200 so there is some savings there. TT bantam cables aren’t much better. I wanted something sturdier than the 1/4" I was using - the cables kept falling out. Long term, I think I made a good choice.

Really all I need to do is spend some time on eBay looking for deals on the cables - I should be able to pick up a bundle of a dozen or so for $10-15 each.

That’s definitely plan B - the jacks are $7 each and not available everywhere.

edit… I see your note about it. Looks like you are planning on doing the same.

Can I ask a basic patchbay question here? Is there a reason that something like a basic Samson 1/4" patchbay would be a bad idea (for patching in a home studio with a decent # of synths and a little outboard gear). When I try and research patchbays I find a lot of people suggesting much more expensive ones that use TT or other cabling systems. I can’t figure out if that’s because their use-cases are really different from mine or if there’s something I don’t understand about how they work or quality? I am far from a professional operation.

I have two of the Samson patchbays in my studio, and they’re great in my experience. The normalling switches on the front is a feature I use regularly. Build quality is very good- they’re popular for a reason.

I recently bought a balanced patchbay and I’m having all kinds of trouble with my unbalanced gear. I didn’t think it would matter this much because I was previously sending the same gear directly into my audio interface with no issue. I have 3 tape machines and my modular synth. I hooked up all of the ins and outs to this patchbay. My audio interface is also patched into it. Work flow wise its amazing but I’m getting all kinds of distortion and noise that I didn’t previously have. I bought some balanced input and output modules for my eurorack system which is helping but I have no idea what to do about my tape machines. How do I properly interface my unbalanced gear with my current setup?

I’ve got a large mix of balanced and unbalanced gear in my patchbay and haven’t had that as a source of noise issue (tape machine, old unbalanced console, balanced interface). I’m curious if it might be a ground loop somewhere? Do you have things in different outlets around the room by chance?

Actually, the first thing I noticed was a ground loop but I tracked that down and fixed it already. I’m having a bigger problem with levels and distortion now.

It might help to know more about your setup. Are any of the connections normalled? What patchbay? In the spirit of troubleshooting, did any settings change on the interface during the setup process? Are you using TRS connections from the interface? Are you sure all cables are fully seated?

This might be better suited for the Questions category.

As another data point, I’m using a patchbay with multiple audio interfaces, a half-dozen synths, modular, and outboard and have never had level/distortion issues. All issues were usually traced to a cable coming loose or rarely, just a bad cable.

check this doc:
https://www.ranecommercial.com/kb_article.php?article=2107
you’ll probably need cables of type #14 for going from unbalanced gear to the patchbay, and type #11 (maybe #9b depending on your mixer or audio interface) for the other way around. it’s what I use (balanced analogue mixer, two patchbays, unbalanced tape gear and old FX boxes, balanced audio interface).

maybe a D.I. can resolve your problems… like a Radial ones…

Sound on Sound published a piece recently that some may find helpful: https://www.soundonsound.com/techniques/patchbays-modern-studio

I mostly use Patchbays to give front panel access to normally rear-accessiible jacks, like outputs and inputs on my audio interface, or to hook up FX loops. My one issue is the relatively small number of outputs I have from my interface. I could probably set things up to make better use of them though mind you. Maybe I’ll do that over the holidays…