i haven’t tried it, but one idea is to midi map a range of notes to a trigger a midi clip containing the root note sequence (in dansimco’s example). then send midi from another channel to transpose the first clip (you might have to use a virtual midi bus for it to work). then add a scale midi effect to quantize the transposed result.

i tried to look for a video that explains this method of transposing, and i think this one does a decent job: 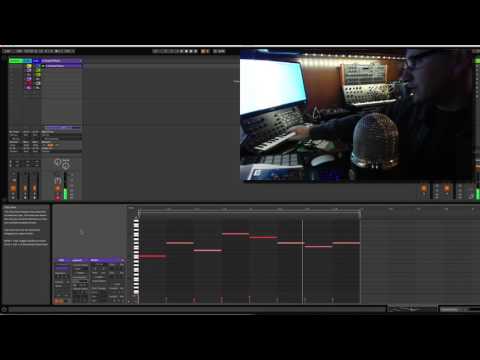 You can only assign the midi mapping to a single clip slot.
You can only perform the transposition from a single source as midi from multiple sources isn’t combined additively.
Note on/off messages are only derived from the clip to be transposed.

This is all fine if you just want to transpose a sequence the same way you can on a keystep as shown in that video.

More interesting (and closer to the modular precision adder/unity mixer technique), would be the ability to additively combine a number of midi sequences and freely switch up the combinations.

There’s a max for live device called keypitcher that kinda works, but it is designed to transpose sampler/simpler devices. It’s pretty buggy too. I’ve been trying to make my own M4L patch but I’m getting a bit stuck trying to get the midi stream from other tracks into the patch. I’m a bit of a LOM newb, but hopefully I’ll figure it out.