I’ve just released ACDLAB, a free grovebox rom for the Nintendo Gameboy based on my ACDGEN algorithmic sequencer. 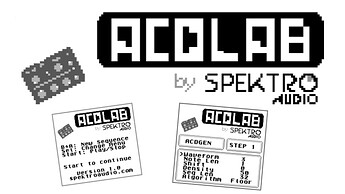 It’s not a deep music tool as other norms apps / max4live devices / plugins that are usually shared here in lines but I hope some people will have some good time checking it out!

It features a synth line based on ACDGEN and a four part drum synth (that’s also driven by an algorithmic sequencer generator).

It’s indeed quite minimal but very fun and easy to play with.

As with any other gameboy rom, it should run well on real hardware (via a sd card adapter) or any Gameboy emulator. 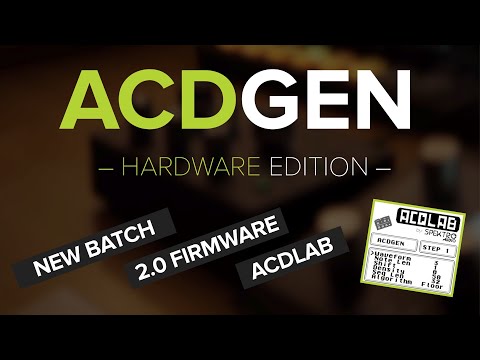 will give it a go as soon as i can

Awesome! Long time Chiptuner here. I hope you don’t mind but I shared it on the Chiptune twitters, discords and on chipmusic.org

@Cementimental I’m actually quite excited to release it as well! Been wanting to make something for it for quite a while!

@Simeon Thanks!! Yeah I definitely don’t mind, quite the opposite! Hope it’ll be a fun new tool for the chiptune community (or at least a fun pasttime) 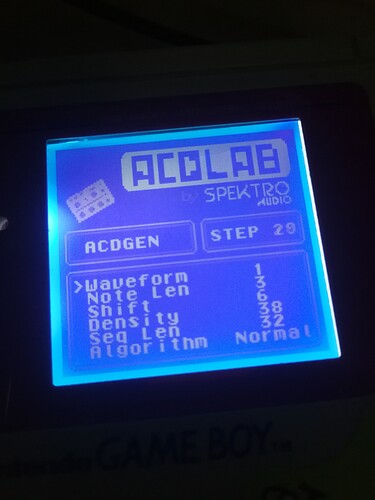 Tried it on the real thing, nice work

EDIT: I’d love it even more if the tempo could go from glacially slow to extratone speeds… but I say that about everything, and appreciate the aesthetic and keeping it simple that you have going here.

This looks super fun and a perfect candidate to run on my extra gameboy when tinkering with nanoloop. Thanks for sharing!

Question for those in the know, what’s the word on flash carts these days? I’ve not kept up with the latest wave of chiptune stuff but would like to grab a cart again.

NICE! I’ve been trying to get my hands on a real hardware unit but it’s quite hard / expansive to get some mods / replacement parts here in Brazil.
I can definitely expand the tempo range tho I’d be more interested in getting a finer control over it. I’m currently using an interrupt to keep time but I gotta check how other apps / roms do it to see what other options are available.

works great on my odroid go. THANKS!

Question for those in the know, what’s the word on flash carts these days? I’ve not kept up with the latest wave of chiptune stuff but would like to grab a cart again.

I have gbxcart catridge reader/writer and use it to write music roms over $3 Aliexpress fake pokemon cartridges. Usually works tho one or two randomly don’t. Also they usually don’t have a battery tho you can solder on on easily. + many music roms don’t even save anyway

Edit: I also use an oldish 64mb USB flashcart you can sometimes find cheap on ebay, works well tho is a bit of a pain to flash using some clunky windows app if you want to use the multicart feature (someone made a mac app but that can only put one rom on each of the 2 partitions)

Good info thanks. I had totally forgotten about the ability to load extra roms on nanoloop thanks for the reminder! 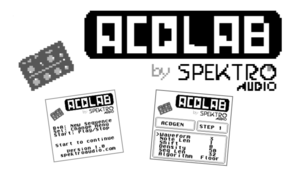 Seems to be a promo for a max4live device, but jokes on them - I have 3 gameboys and 0 Ableton licences.

While I’m making unsolicited suggestions, adding link-cable sync input from nanoloop and/or LSDJ would be a lot of fun too

@Cementimental Yeah, that’d definitely something I’d like to add, I just gotta investigate how the sync method works so I can properly implement it.

Rather than flash carts, these days you can get carts that take microsd cards, for example Everdrive GB. It’s much simpler and cheaper than dealing with all that extra hardware. I have the Everdrive GB X3 and run LSDJ without problems. Excited to put ACDLAB on there!

Remember when you needed a computer with a serial port to update your LSDJ cart? Pepperidge Farm (and this guy right here) remembers.

Thank goodness I bought a couple of USB carts back when they were cheap and available!