lately I’ve been listening to acid house music and thinking about markov chains. previously I used markov chains to make a jazz piano accompaniment. it seemed to me that acid house basslines might be amenable to applying stateless logic for generating believable sequences. whether this results in “believable” acid music is up to you, but worth it for me to give it a try.

this script started off as a literal “test” to do A/B explorations on different meta-parameters of the markov chains, but its too slow to sample parameter space by listening. so instead, I decided that the markov chains might be intuitive enough to edit directly, and I added controls to edit each individual markov chain. the output can be sent to midi, crow, or the builtin engine. the builtin engine is forked from bernhard’s sc code which itself is forked from by_otophilia’s code for a 303 emulator in SuperCollider.

simply use K2 to generate/modify sequences.

you can have sequences modify themselves and evolve by changing the parameter PARAMS > sequences > evolve.

you can also manually edit notes in the sequence

sequences are generated based on the transition probabilities in the markov chains. you can edit these properties to create your own style of generative acid basslines.

to enter the markov-chain editing mode hit K1+K2. all controls are as follows:

this next part assumes a basic understanding of a markov chain. pretty much all you need to know can be learned by reading these examples. feel free to ask questions.

transitions between “no” and “yes”. when the state of this markov chain is ‘yes’, then the velocity will be increased slightly for that note. transitions between “no” and “yes”. when the state of this markov chain is ‘yes’, the portamento will be increased. for midi devices you can set the portamento cc in the PARAMS > midi section. for crow/engine output, the portamento is applied automatically through slew in the pitch. in designing this sequencer I felt that I had to separate between “bass” and “lead” notes in the bassline - though technically the whole thing is a bassline, the “bass” notes typically being an octave below. I felt that acid basslines get part of the signature sound by oscillating between two intertwined melodies that are loosely mirrored across an octave. so there are separate markov chains for the “bass” and “lead”, which are combined using this “bass or lead” property. the bass and lead parts each use two properties to generate a single note. the starting note of each sequence is the “base note” defined in the parameters. the base note is then increased by coef x mult at each step in the sequence where coef and mult are determined by the current state in both of those markov chains. for example, if the coef state is 2 and the mult is -1 then the sequence will transition -2 notes in the scale. the scale can be defined in the parameters. the lead coef+mult works the same way as the bass coef+mult, but only affects the lead notes. crow is supported. output 1 is pitch which will be slewed according to slides. output 2 is the gate (0-5v).

midi out can be selected in the parameters. you can also select the cc value for portamento (if your synthesizer allows it) as well as up to three LFOs that will be sent to the midi device via cc’s (e.g. for filter / resonance / etc).

save and load via the PSETs. saving and loading should save all the sequences that you’ve accumulated over time (i.e. saves are “collections” of all evolved sequences).

Oh yeah! Dang dude, do you ever get outside?

do you ever get outside?

actually most of this script was actually written on an airplane

(thanks to norns docker) 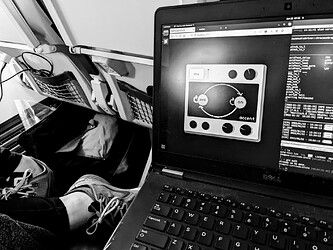 Nice! Glad to hear you’re not locked in a basement somewhere, chained to a terminal. Great work!

What, the, actual fuck?

Wonder what happens when I plug this in to an Acid box….

EDIT: “I just kinda wrote this on a plane” is seriously strong “nbd” energy

chained to a terminal

Now i want to dig out my computer science theory textbook (Sipser 2012) and recap FSMs and NFAs.

oh, just playing with norns on a laptop while sailing through the sky at 500 kn… you know, as per the usge

Holy shit, your seatmate is doing some serious foot contortions.

Had a play with this last night and really loved it. Really appreciated this.

I’m not sure I understood it though-not really a problem, I am happy to be surprised.
One question: if i wanted to keep things quite bass heavy is there a way to limit the high lead notes? keep them within a certain octave range?

I don’t really understand it much yet, but it’s very interesting to play with.
However, it seems to be a bit weird with MIDI start messages? It starts sometimes, but not always.

It has something to do with pressing stop twice on my Digitakt (common thing to do, stops the fx engine). Looks like you’re assuming the user presses start or stop once, in sequence.

This is amazing – well done!

Quick question: Is there any way to display the notes being played either while playing or when stopped? Would be pretty nifty to load an initial bassline and then have it evolve using MDP

Quick question: Is there any way to display the notes being played either while playing or when stopped? Would be pretty nifty to load an initial bassline and then have it evolve using MDP

what is MDP? yeah the note display could be added to the redraw() routine, probably in these lines, the actual note number is designs[1].seq.data[sel_note].note. I can add it when I get a chance or will gladly take a PR

However, it seems to be a bit weird with MIDI start messages?

I have to play around with this, it could very well be weird with MIDI start messages as I haven’t fully tested them.

I am using a Docker-ized version that utilizes norns.online locally for the interface /controls. the code is here: GitHub - schollz/norns-dev: Docker images and information on setting up a Norns development environment. there is no useful commentary there though (the README’s that are there are not accurate to my fork). if your interested let me know.

One question: if i wanted to keep things quite bass heavy is there a way to limit the high lead notes? keep them within a certain octave range?

yeah! use the markov chain for “bass or lead” and make sure the probabilities lead towards the “bass” to get more bass heavy. you can also heavily limit the lead range by biasing away from “+2” or “+3” in the “lead coef” markov chain.

our seatmate is doing some serious foot contortions

lol we actually had the three seats to ourselves!

Damn! As soon as I get home I’m going to drive the Nymphes with this script.

I noticed the library is also available in the public repository but installing it from there fails as the folder name then contains spacing. Installing using the git command works fine.

Pull request to fix is here