New here and with a Shield

I can’t run the script due to an error init while I can’t catch the Matron error clearly as it start running in loop with an incoming osc message , tried to screenshot Maiden and the only hint I found is this screenshot Please help

Maybe it is possible and I am missing something?

Question, how do I set flat or sharp chords? For example, CMaj is I, DMin is ii, what would BbMaj for example be?

currently it only allows chords in the scale (major/minor, and combos with +7,6-9,dom7). here is the chord. I think you can try adding in bI, bii, etc. not sure that will work though but that’s what I would try first. otherwise you’d have to change the scale each chord change (i.e. here) but I’m not entirely sure how to implement that. maybe there’s an easier way.

New here and with a Shield

I can’t run the script due to an error init

thanks for the maiden message. you are getting loops of incoming osc because the script previous (maybe that was acrostic?) didn’t stop correctly. can you reset your norns, and then load maiden, and then start acrostic? at that point you should just get one error message. I don’t really know what the problem is though yet from the error message you posted.

Thanks, I did my best in order to grab a better screenshot as it is very quick and only save a page of text: llok like it cannot locate several files while I can only see the content of the SD through Maiden or Samba for transfer my loops. My version is 210607 ( taken from the Sleep info page ) Hope it help, really looking forward to test your script. 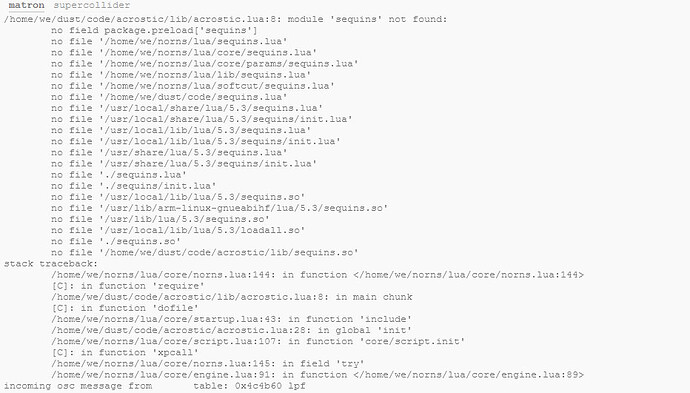 thanks @alancodger. looks like you’ll need to update, goto SYSTEM->UPDATE to do so. the minimum version needed is norns: update 220129

So I have to fresh install the shield

Hope to get it right, I read that running an image earlier than 220306 is compulsory?

read that running an image earlier than 220306 is compulsory?

oh no! I’m not sure where that information was conveyed - but up to there is one line (easy to miss) about needing an up to date verison.

I have to fresh install the shield

its a good time to do it! before you get into the mix of things its good to start with the most up to date version. this guide will help you go through, and then after you get the new image you can update (there was an update today!).

Sorted all out with the update

Cool script! I’m getting pitch but no note on/off when sending midi… thanks if anyone can help

where do you find that Glass mode?

are you on the latest version? also any output from maiden?

where do you find that Glass mode?

I think this is referring to some of the comments I made in the code - namely these lines. when I was playing around with acrostic for my own benefit I ended up hard-coding a lot of chord changes that I liked. one of them was from Philip Glass Etude #6 for piano. there’s some other interesting ones like Mr. Tambourine man and this one which I think is from Tonight tonight from Smashing Pumpkins.

ah cool and very interesting
im not diving in there though, dont trust myself to not mess something up ill have to spend hours trying to fix

how can we send you a direct message dude? I tried on IG but I think you’re busy with all these great things to pay attention to that

Apologies for the delayed reply.

It was probably a stretch on my part calling it a “mode,” but the lines @infinitedigits linked are what I was referring too.

Up until around a year ago I was also hesitant to mess around with the code, but it’s surprisingly intuitive and very rewarding. If you’re feeling adventurous, open the lua file in maiden, delete "-- " from the start of lines 210-224, add – at the start of lines 188-195 (which will comment them out of the active script), then save.

I was also hesitant to mess around with the code, but it’s surprisingly intuitive and very rewarding

yayyy! I’m so happy to hear that you got into messing with the code

the code is all good to mess with. feel free to ask me questions if you break something and I can help fix it

how can we send you a direct message dude? I tried on IG but I think you’re busy with all these great things to pay attention to that

please don’t hold it against me

I’ve been trying to answer questions in blocks now so it might take a few days to respond for when I get a block of time to answer.

im not diving in there though, dont trust myself to not mess something up ill have to spend hours trying to fix

In addition to what @howzero and @infinitedigits have suggested you can also make a copy of the script, rename it … “acrostic-glass” or something and use that as your sandbox. That’s what I’ve done in the past. Not that I’ve been especially successful, but ヽ(。_°)ノ

if im understanding you incorrectly please let me know

the top three rows of notes NEVER change but the bottom three rows DO change at each chord step, useful for arpeggio’s, and turn the changing off in the params?

that equals 12 columns right? so then wassup with columns 13-16?

and if its set to a second page totaling eight chords, then there’s just not enough columns on the grid to control that configuration entirely?

LASTLY =-) - theres no way to make the screen reflect the notes being sent when being sequenced via the grid?
Only way is to use a MIDI monitor - right?

Awesome script! I hook up a midi controller, map lpfs of the loops but it doesn’t seem to work

it was taken out because of the noise issues in the new norns image. but these issues are fixed (and have been fixed for weeks). I just wanted to give people time to make their images up-to-date so no one had issues.

the top three rows of notes NEVER change but the bottom three rows DO change at each chord step, useful for arpeggio’s, and turn the changing off in the params?

yes that is correct!

also theres the part where you say three columns is equal to one block of a chord SO there’s 4 chords if Acrostic is in its default setting that equals 12 columns right?

yeah absolutely I totally mispoke there - there are four columns per block.

theres no way to make the screen reflect the notes being sent when being sequenced via the grid?
Only way is to use a MIDI monitor - right?

yeah there is no display of the note. you could use midi monitor, or edit the script to show the note somewhere! or just print out the note in maiden.

I’m currently trying to set my Levels Parameters settings (Monitor Level, Input Level, Monitor Type, etc) and they will not persist through resetting the Norns.

Is there a way to save these settings that I’m missing?

Is there a way to save these settings that I’m missing?

does it work if you save and load a PSET?

I went and edited the Norn’s startup file (whose name I cannot recall) in Maiden which to edit these settings to my preference, and they are persisting through power down, but I assumed there must be a way to set these levels and settings on Norns itself and to then save them.

Here’s a shot from a live set of the Acrostic patch driving Strega. This is the third time I’ve done this piece in a life set and folks absolutelyuu love it. Huge props to you once again @infinitedigits for visioning and executing this amazing script.

I do find myself still struggling with the thoughts of how much I “own” the music in this piece when it’s existent is so deeply dependent upon this script script created by somebody else. In a lot of ways I feel like I’m acting more as a vessel or conduit for this other piece of art (the Acrostic script), and that I’m taking all of the credit where a majority of the credit should go to the script and script creator.

This will be something I’ll continue to think on, and in think it makes for good food for the brain. One result I’ve noticed is that I find myself kind of feeling subtly insistent upon adding other elements to this piece when I perform it, and not only is it (obviously to me) entirely unnecessary, it most frequently just doesn’t work and doesn’t turn out well, as is evidenced in this video. 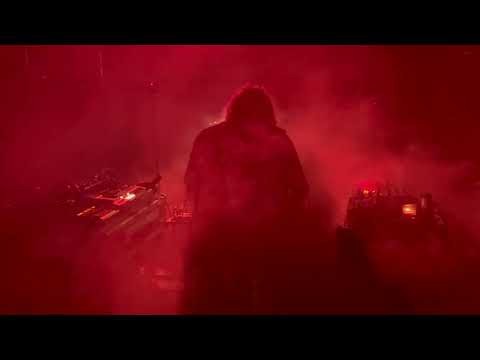