These look mighty impressive. Had my eye on them since they were announced but yet to see or hear any demo material. Anyone here using one?

I got in on the early birds’ batch. Pretty insane. What would you like to know?

General impressions, I suppose. What sorts of things are you doing with it? I’m interested in how useful the max/min idea is.

First off, the build quality is exceptional. Secondly, it is physically very dense. To the point where it’s hard to flip switches, turn the lin/log/amp/offset pots, or read the labeling (tiny). But I’m over that now, because functionally, it is really fun.

To be honest, I haven’t delved too deep into it–really just firing off quick stochastic envelopes or using it for normal quad envelope functions (min being higher than max for the latter). I need some more time to play around with cascading envelopes and sending it more cv. I’m sure it’s a drone beast, though I haven’t explored that aspect of it yet really. I think its stochastic nature is most apparent for relatively short envelopes. In fact, it can have a pretty natural, almost electroacoustic. feel depending on how narrow the min/max are set.

I’ll try to remember to record a simple rhythm tonight with it and post it here.

I’m curious if its a Maths replacement.

I have both in my rack, if that tells you anything…

It tells me you’ve got a big rack!

I’m mostly interested in it for an electroacoustic(ish) application. I did wonder that about the switches etc., though it seems like you could easily get a lot out of just tweaking the min/max dials and patching it really densely.

It looks especially useful for generative stuff (I saw Keith Fullerton Whitman praising it recently on his Instagram page) but I can’t help but think it would be more useful as a smaller module with a series of expanders / companion modules, rather than being jam-packed with a 2HP expander for the stuff they couldn’t squeeze into the main panel.

Can’t say if could be a replacement, depends on the context. Obviously they definitely have overlapping capabilities. This is something I’m currently exploring–for the record, I’ve never been in love with Maths. As a patches control source, Maths is probably more readily tweakable, especially because of channels 1 and 4 controls. The lock/unlock feature of the 506 is key.

Early adopter here. I may be a little biased because i’m a long time fan of ADDAC’s designs, but i must say they crafted a pretty insane module here.

@b_w said it : outstanding building quality, a lot of functionalities to be mastered in a small place. I agree the switches feel tiny at first, specially the one’s about the enveloppe’s range (the fastest are in the middle, slow on the right, mid on the left). That being said, the little pots for scaling and the leds help a lot : you can always figure where you are.

I haven’t dig that much in it. For now i’ve used it in percussive patches, where the random lengths, carefully wrapped around close values give a very natural and acoustic feel to a beat. With the lock function and the option to put the random out of the way (when MIN>MAX), i use it as four enveloppes packed with gates (EOR and EOF). I used also the slew to have two versions of the random CV spitted by the expansion (the gated one and a slewed one derived from the first).

All in all, the possibilities are huge.I’ve owned a Maths and the 506, clearly, is much less immediate at first, less “open” in a sense. But it’s a module that make you think about what you want, and approach a patch in a reflexive way i tend to appreciate.

Sure, not everybody’s cup of tea, but it’s a thing to be tried.

Agree wholeheartedly. As an owner of one, I was wondering if you had this issue: My channel 1 lin/log pot is very tight. I’m hoping it will loosen up. Do you have any like that too? 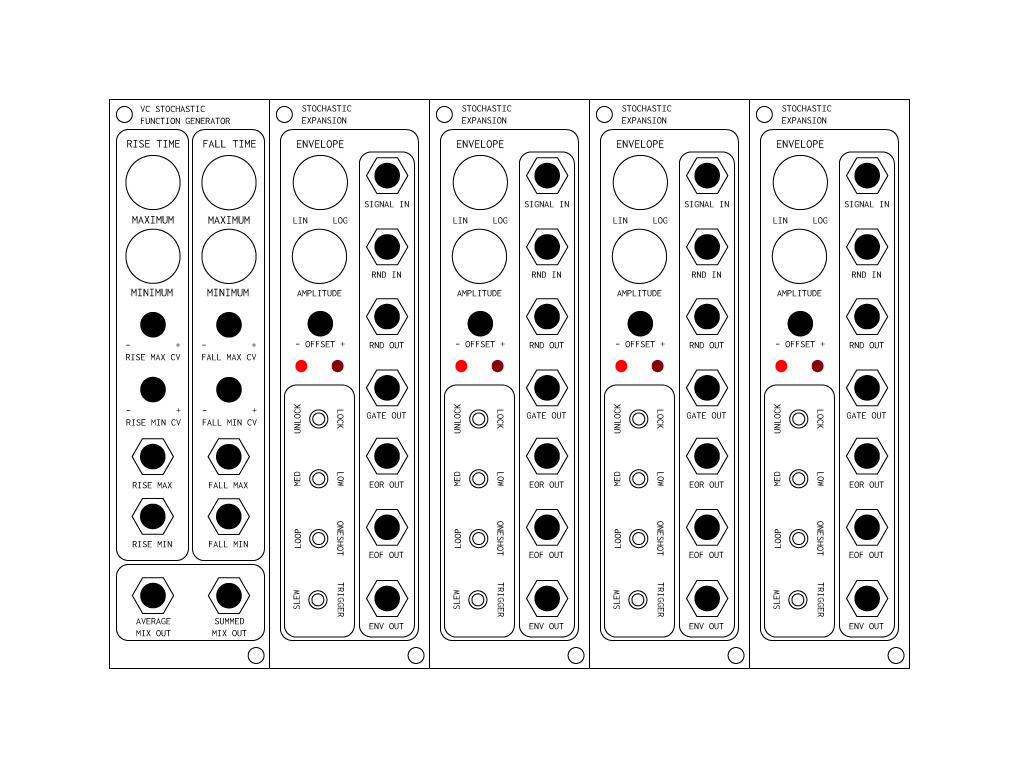 I made a mockup of a redesigned Stochastic Function Generator, which would break the center portion of ADDAC’s design into individual modules, with anywhere from one to four expansions able to be chained to the main 506 controls. It would take up a few more HP if fully expanded, but I think it’d also be a hell of a lot more playable.

No, in my case the pots show no problem.

The offsets are very sensitive, but it’s just the consequence of their function. When you offset an enveloppe, the result is immediate (for example, with a VCA a perc can turn drony etc.) and the tiny size doesn’t help that much!

Build quality wise, beside having a 709Mel with the Dry/Wet inverted (a common mistake in this batch i think), i haven’t had any problem with Addac…

Where did this come from?

I made the mockup in Adobe Illustrator.

I think the ADDAC506 looks excellent. Currently waiting on mine to ship

I received mine a few weeks back. I also own the “original” design made by the collaborator of ADDAC Systems, and I can say I absolutely love where they went with this design. The UI is a non-issue for me, but then again I never mind small modules that others do.

I’m also in love with the Min/Max concept that ADDAC have been using in their random modules. I like how you can define where you want your random changes to take place.

Currently trying to figure out a case build around the stohastic functions. This is like an extremely pimped Doepfer a-143-1/a-143-2.

Originally, I was concerned with the UI, but after a few months i can say that the 506 is the heart (ok, maybe lungs?) of most of my patches. It has been long enough that it’s become second nature to operate.

And I formally amend my previous exchange with @bobbcorr. I sold the maths what seems like ages ago. Just the 506 now. Not looking back at all.

Your amendment to our previous exchange is noted and appreciated. I refer the honorable person to the reply I gave some moments ago. Cough.