So I’m realizing that I really like when there are drums in my patches, but I like to keep it pretty simple. Just a beat to add some context.

Has anyone here put some Tip-top modules (or whatever) and a Grids/uGrids into a little POD as a simple satellite drum machine? Really all I want is a self-playing 909 and that seems like a decent way to make one!

I was more using 909 as an example of “I like the way those sound”. I don’t need all the sequencing and voices and functionality, just the basic stuff to make a kicking dance beat.

It would probably be kick+snare+hihats being sequenced by something like Grids. I have some other percussion sources as well but it would be nice to have some dedicated modules.

This is what I’m working towards, but I’m starting from more or less what you’re saying and enjoying it: Pam’s, uGrids, and 2x Erica Synths Pico Drums (with 2 ins each, that’s kick, snare, closed hat, open hat). Right now it’s part of a larger rack of mine, so there’s also a 2hp Unity and an Intellijel Stereo Out 1U to actually get the sound out

With the 4ms Pods, that’s basically what you’d fit in a 34X: Pam’s, Grids, 2x Erica Synths Pico Drums, 2hp Unity (or 2hp Mix if you’re fine with mono), and HPO. If you get the micro-Grids, that frees up 8hp to fit in another drum module, like the Tiptop 808/909 pieces, WMD Fracture or Chimera or Crucible or Crater, etc.

You do you, but I cannot stress how much I would not recommend a uGrids.
MilliGrids is the smallest design I could see being playable.

The Disting EX is a great drum sampler - 6 trigger inputs and easy easy easy to add your own samples (though there are already decent samples on it). Add a Grids and a dual logic module and you’re set.

Didn’t realize Disting EX packed that much heat! I’ll definitely be budgeting for one!

Truthfully I’ve been getting pretty damn close to what I want out of OP-Z step components, but I always dream of a 100% eurorack system. I don’t mind letting the OP-Z do the heavy lifting, but I like having sound sources in the rack so they’re easier to submix.

Another way to add drums to the setup is when you’re trying to make patches that a drummer might find joyful to play along to. It’s so satisfying to be a part of when a new element are transforming a simple little patch into a whole song. For others it might not be that joyful to listen to, but what do I know?

This is fantastic! Is the drummer a friend of yours?

How are you integrating the OP-Z? could be cool to use a MIDI/CV module to use the Z sequencer to drive some drum modules/samplers in your case. I use the mutant brain with mine and it works great.

I tried this and wasn’t thrilled with with the results from grids. Also had a pam’s in there for modulation, and spent a few months pretty diligently trying to configure modulation. There were some really fun jams, but it didn’t do the trick to consistently. Two main issues were: can’t do effects on the drums individually (thinking in terms of ‘dynamics’ more than outright sound-design) and Grids clock doesn’t respond well to a swinging clock (which I’m always using for the main parts of my patch), so Grids also had to function as my leading clock, which also meant I couldn’t control swing fidelity dynamically (swinging 32nd notes vs 16ths vs triplets or w/e). I’d really recommend Marbles over Grids, even if you’re not looking to use the pitch outs (I never do), since you can set it, let it unfold, and then loop it as the last step before recording when it comes around to something you love.

Here is a link to the patterns contained within Marbles red mode – you can use it as a key for drum patterns and just do the interpolation of the parts yourself for each patch (which will take two minutes) and use any three channel gate sequencer (or a two channel gate sequencer and your leading clock) to control the drums. It doesn’t sound like you really want the grids insanity, and you’re already sequencing by hand, and getting / racking marbles to use one side isn’t really all that cost / space efficient. Even if you’re buying a compact sequencer to make it work, you’re gonna save some space and some money doing it this way.

Final option would be triggering drums by hand through a cheap delay, so you tap them in once and they just loop forever (with a VCA or FX after the fact for more control), which is an angle adjacent to what I’m working on (just this morning!) and seems the most intuitive / playable route. Plus refining one’s sense of timing is never a bad idea. And to start off
you just have to be able to play a kick and a snare roughly equidistant from one another. Going to be using the Marbles contents as a starting point for patterns to practice on my trigger pad…

edit: added the actual link instead of just saying HERE IT IS with nothing attached

Thanks you! Yes, that drummer is a friend (and neighbor).

If you use VCV Rack, all the prOk drums (plus a bunch of other modules) have just been released. $25.

After examining some different drum module options, I took a chance on a 1010music Bitbox mk1 (which can be found used at a nice discount). Loaded it up with some of my favorite x0x samples, and it is really a pleasure to use. I’ve never had a sampler this nice, and the touch interface is really quite beginner friendly. I’ve had my eye on other hardware samplers, but I’ve resigned to eurorack as my format of choice, and I’m happy to have a powerful sampler in the modular ecosystem.

I also snagged a second-hand uGrids (before reading Grey’s disdain for the little versions), but I’m very happy with it for generating evolving drum beats that don’t require too much brainpower. Definitely suffers from the same ergonomic shortcomings as all uTable modules.

Super happy that I decided to liquidate (most of) my other synths to slightly expand my eurorack. I’m very happy with the results and can’t think of anything that I would want to change at this point. Other than maybe another clock, but that isn’t a priority at this time.

Not sure if this would work (for you, or at all) but what if you had a sample of some rhythmic triggers loaded into Bitbox? You’d still have to trigger that sample from your other clock, but could be a way to get all kinds of divisions and multiplications if you pitch shift it!

I just picked up a WMD fracture and

it to pieces, instant Venetian Snares vibes when patching up many of its inputs to gates/ratchets…

It’s so good. As I have said too many times, and will say again, it’s super underrated.

Yeah, my favorite kick is an fm’ed & synced complex oscillator mixed with a little pink noise, combined with a touch of short room reverb.

My second favorite kick is simply a filter, because that always works.

In real life recording, it’s never the heaviest or hardest kicks that sound good, it’s the ones that sit in the mix correctly for a particular song and tempo i.e. those with low mids texture (similar to complex oscillator example), maybe recorded with a U47 Fet some feet back, or close without being super pointy, such as with a Beyer M88 of M380 (more like the filter). Or a mix of the two. 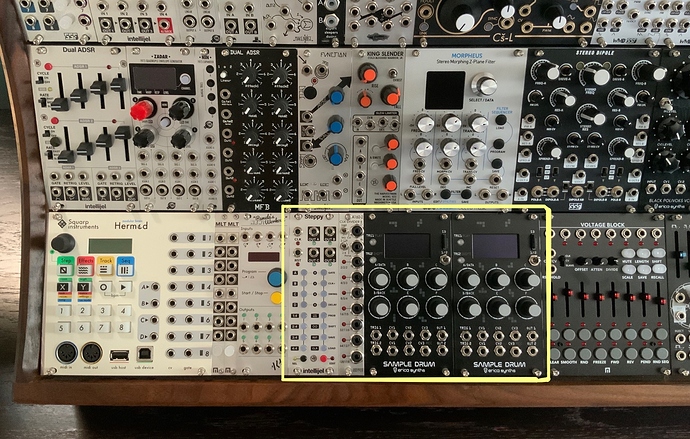 I recently added a sample-based percussion section to my system which I’m having a lot of fun with. It’s by no means as clever or resourceful as solutions which fit a true modular paradigm like the excellent ideas posted by Joseph above, but it does offer a somewhat immediate and literal workflow which might appeal to various people.

For me the impetus was regularly using up too many Hermod tracks to trigger and modulate percussion, so I ended up with the Steppy for sample trigs. The Sample Drum has six assignable CV ins to manipulate various params (sample position & selection, fx levels, etc). I use the A-160-2 to send clocked gates & trigs to these at varying divisions which can create some really lively patterns.

As an aside, with this module arrangement I can also limit the extent of clock distribution to the first half of the first row of the cabinet. (AUM master -> Hermod -> Pam’s -> Steppy -> A-160-2 -> Voltage Block).

Adding a waveshaper into your setup can make a whole difference in sound. I used to have a Mutant BD which I passed through a A137-1 in order to get the gnarliest, meanest, brutalest (?) sounds
Here’s an example 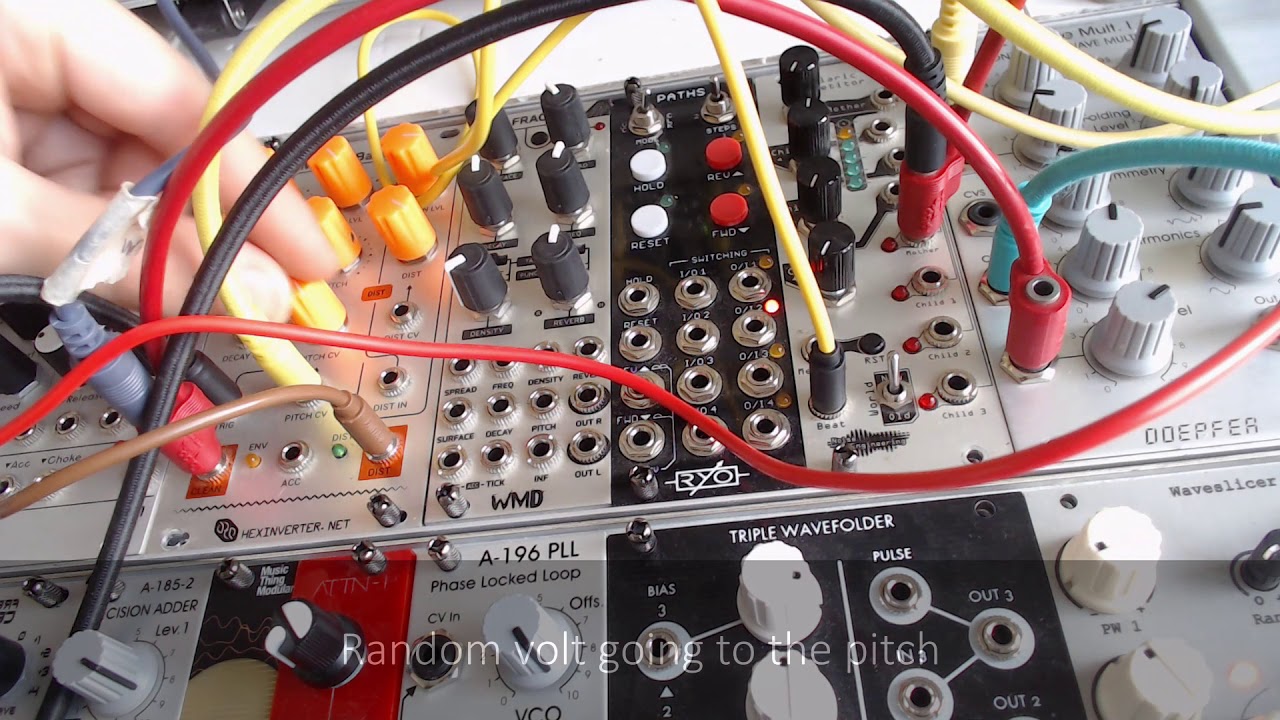