AE Modular is NOT Eurorack compatible and uses simple patch-wires and small pin-sockets. Generally, it tries to be simple and cheap and “not-so-perfect” (quoting their own Kickstarter text here).

It does look and sound quite nice, I think.
If you are interested, check out the videos in the playlist below…

cant get used to any gear that’s built w/ em

Most of those headers are only rated for 50-500 mating cycles. They usually last a fair bit longer than that, but it’s still a pretty low number for something that’s expected to be patched frequently.

I backed the AE Modular on KS in December, and its just arrived…

- if the KS price is to be the guide, we are talking approx 30 euro/module, and you can also build your own… Ive had so much fun already, and the explorations have only just begun.

anyway, here are two video
first one, just a quick overview of AE Modular connected to my axoloti
second one, showing how you can start hacking it with other gear…

part two - interfacing to other stuff

apologies for soft focus, camera seems to have moved… also for my lack of modular experience and the naivety in the joy of its sound

its now generally available for ordering etc, with its own website, including shop https://www.tangiblewaves.com and also its own forum http://forum.aemodular.com (quite new, but starting to buzz)

there have been quite a few new modules since release including a great multi fx module, and tangible have still kept these affordable.

but I’ll concentrate on my experience with it, a kind of an update…
touching on some comments from above, and also what ive been up to with it.

first patching mechanism, Ive not really had any problems with it at all.
though interestingly, Robert (Tangible Waves) is now shipping modules with ‘improved sockets’ and better patch wires.

support, I had a couple of minor issues with a couple of modules from the kickstarter ( I got mine very early) . Robert (tangible waves) support this out immediately, no fuss… and generally has been awesome in his support.
(also its noticeable that where needed, he is doing minor adjustment to modules to improve them)

eurorack, actually its operates pretty well, not only has 2CV IO as standard but there is also a 4CV IO module, to continue adding more (in 1 HP)… and they also now have a eurorack adapter so you can put it in a eurorack case - heres mine

v/oct - by the time AEM was released, both the dual oscillator (2 OSC) and VCO were v/oct. the latter tracks better. 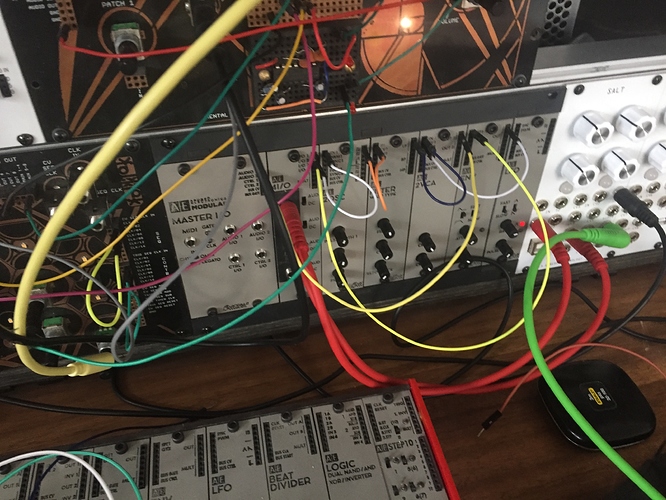 I truly love the sound of AE, its really great - and also its small size means its really portable, you can even run it off a usb power bank (with adapter)

what has surprised me the most, and led to loads of fun is its openness to DIY.
its cheap to create your own modules (and less fear of blowing things up due to the price… and being unipolar 5v, makes its much simpler than eurorack.
it really draws you into to experiment…
(the blank panels you get become really useful … and the fact that a new case is 19 euro means no worries about filling it up!)

starting simple - here, I just chucked the Bastl Kastl into a module format (so gets power from AE) , and all the patch 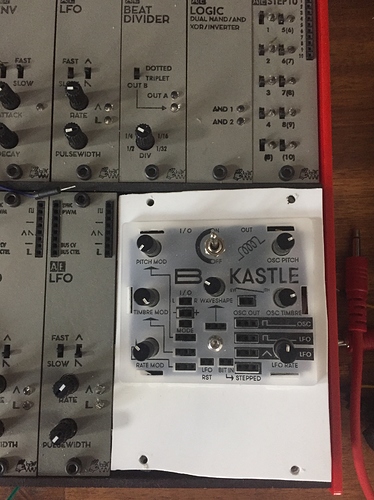 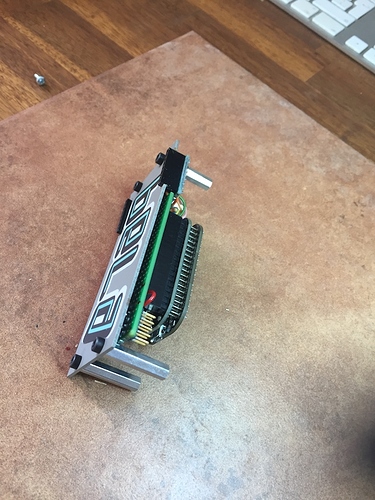 very simple, 8cv in, 2 cv/audio out… but bela is powerful, so you can run PD/SC on it, which is alot of fun

the today just finished a arduino module, (ok, not done the front panel yet !) 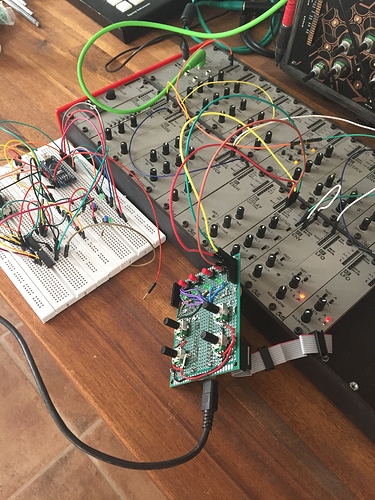 In many ways this is basically the same as the Eurorack Ardcore, and in fact I reckon I can easily convert most of the patches

so yeah, Im a big AE fan now, really nice to see someone doing something really different, and also making a great job of it…if you want to get into modular synthesis on a budget its unbeatable, also if you fancy playing with creating your own modules its great too.

Eurorack is still cool, and I bought a rack too… but its nice to have options.

(and now AE has introduced me to creating modules, Im now ready to buying/building eurorack kits to help keep the price down a bit

Yes, there is audio input.
(Don’t know about guitar levels though)

The master module has 2 audio I/O ( and also 2 cv io) that are birectional - so you could use one for output, one for input - or both for output.

If you need more there you can buy 4IO modules, which give you an additional 4 bidirectional io, for either audio or cv 29€

could you see this as a good entry point to get a young person into modular synthesis? price wise it seems great for that purpose.

absolutely. its got all the modules you’d expect, and the price is fantastic… (even the case/power which can cost a fortune in eurorack) , and sounds good (a few videos now on youtube) , also its size makes it really portable (and you can run off a USB powerbank, with a usb converter)

some questioned the use of patch wires, and durability which is a valid concern.

Ive honestly not had issues with it… but still , Robert at tangible waves has ‘addressed’ this, by proving higher quality patch wires, and also changed to better quality headers (metal lined ones rather than plastic).
so despite not having had issues, I will say these do feel like a better/more durable solution. other options to get into modular…

go ask questions over at http://forum.aemodular.com/ , its becoming a nice community…

They could always try vcvrack.com if they don’t mind software, plus it’s free! That’s what I’m doing

you could use VCV rack for free, but this for me lacks the tactile/physical nature of modular.

That sounds like a great option as well!
My specific interest in this would be to use it as a tool for bonding with my 12 year old nephew. I have plenty of modular synth stuff of my own and he has expressed an interest in it in the past, so having something physical that we can sit down with together and i can teach him at that he can keep on his own to explore when i’m not there is really appealing. i think both of us are definitely the tactile/physical type of learners as well, which makes software a little less appealing.

yeah, that could be fun to do…
(you could easily hook into your modular when your around too, for extend possibilities)

its portability could be a bonus too, as you don’t have to be fixed to a location…
grab the headphone module too ( 30 euro) , that has two 3.5mm headphone outputs, great for sharing, and again be portable.

tip: it can be good idea to chat with Robert @ tangible waves before ordering.
the ‘complete systems’ are by far the best value. (much cheaper than buying case and equiv modules)
but some have users have said, that Robert has been flexible with these, allowing some changes to what goes in them - so you can tailor them a bit.
(I don’t know details of this though, as I got mine at the kickstarter time, so that was not an option then)

yeah, vcvrack is very cool, in fact at the moment I’m using it to decide what modules I need to ‘finish’ off my eurorack

oh good call! i will shoot him an email… two 3.5mm outputs sounds perfect and headphone out is a must, for his parents sanity at least

portability is great since we hang out at a lake house a decent amount.

feel free to shoot me a message if you want to talk about eurorack stuff! i’m a little less knowledgeable about the current crop of modules but i’ve been around for a while and have tried a bunch of different things.

Just wanted to say how much I love mine. I wasn’t really ready for a eurorack set up financially and this is just the thing for me. I can also move it all over the house easily and power with a USB battery pack. I’m steadily building it up when I can.

I’m waiting on delivery for my ae modular system too

Yes, my modules took quite a while but I did get them!

There is a new compilation out with tracks from the AE Modular community. It’s called Aether Waves Vol. 1 and I think it serves as a good demonstration of what one can do with the format.

All proceeds go to charity

I’m wondering if I should start with AE instead of jumping directly into Eurorack. There’s obviously a lot less variety, but it just seems more “punk rock” and DIY-friendly and a whole different, cheaper, lower-pressure kind of fun. At the very least, if the delay is decent for Karplus-strong or (on the other side of the scale) rhythmic looping, there’s definitely some fun to be had there. It seems like it interfaces nicely with Axoloti as well.

I’d advise starting with Eurorack, mostly because it will be around forever as a format.
I hope AE Modular is also around forever, but it is reliant on a single manufacturer, rather than the multitude with Eurorack.
Eurorack is also very DIY friendly, it’s mostly small companies and can be as “punk rock” as you like.
You can make your own case, even out of cardboard!
You could make every module you like, either from a kit or design your own! Making the modules from kits is very easy, you just need basic soldering skills and the ability to follow instructions.

AE is considerably cheaper than eurorack, and the unipolar 5v makes it extremely easy to diy for… also the cheaper investment made me feel less nervous about damaging other modules.

That said … if you know you are also going to go into eurorack anyway, then it’s money that you could put towards that.

AE is particular good if your not sure if modular is for you or not, and want to test the waters.

I wouldn’t worry about ae longevity it seems to be very popular and tangible waves have been expanding ever since it was released in Kickstarter a few years back.

Actually, since I bought my AE Modular I’ve downsized my Eurorack from over eight rows to only two, because the AE (and DIYing for it) satisfies me so much. I might even get rid of all my Eurorack and just keep the AE and my CGS Serge for my modular synth cravings.

I know it’s probably not a very common situation, but that’s how it went for me somehow

I’m also not worried about longevity, because the AE Modular I have doesn’t spoil. As long as I don’t break it, it’s there doing its job and we already have lots of modules to choose from, with still more being developed and released regularly.

Just wanted to share some new videos about the AE Modular. The format recently got new and improved patch cables and the long awaited ALGODRONE Granular Bytebeat module and SOLINA String Machine are out now