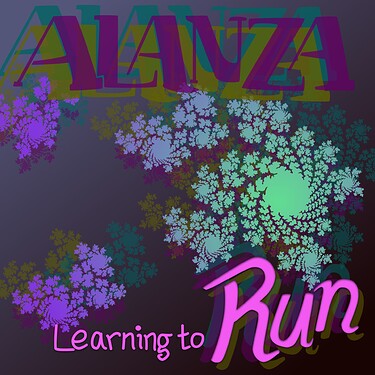 I’m so excited to share my first album, Learning to Run, which is up on Bandcamp and will be streamable imminently.

I started writing this album in January, in Manhattan. Of the apartments that I’ve lived in for one year, that one takes the cake for sure—I wrote waver and the norns port of bitters there. My bedroom had an absurdly large window spanning most of one wall and I did a lot of thinking, coding and even some musicking sitting on my bed, looking out that window. Anyway, I mention it because my desk was in my bedroom too, so I had to put away most of my instruments. After a while I even put away my modular in order to have a little more room on the surface of the desk.

Starting in the winter of 2020 and continuing into the summer of 2021, I had started making music seriously in a way that I hadn’t since high school. After making bite, a FM drum synth, I realized that it was possible to make whole tracks using only it and my other M4L devices, bitters and onebit as sound sources. “Breaking Philip” is one such track from that summer that felt like more than a proof of concept (although in a different way it is—I’ll say more below).

Partly because of the lack of space, I decided that for the album, I would work solely in the box, using only these sound sources. I say “partly” because of course I also realized that this process was what was working for me.

Aside from “Breaking Philip,” tracks on the album appear in the order that I wrote and recorded them. I started the album in Manhattan and finished it in Brooklyn. Along the way sacred cyborg harmony blew me away, just after I had accepted that maybe I could sing on the album. Even though I moved away in 2020, the album also has a bit of Boston on it—“Your Way Through Mine” is a cover of my favorite song by my favorite Boston band, The Owens. I broke my constraint on “They Gave You Bones,” recording my MS-20 for one of the lead parts.

It’s 10 pop songs, and clocks in at just over half an hour, both numerical markers I set out trying to hit. It was mixed and mastered by the very talented StephTheGirl, who honestly blew me away with what she pulled out of these tracks. In particular she took “Push It Through” from a moody ditty with a bit of syncopation to a banger, and somehow transformed “Not Quietly” from a track that I had put everything into and still came up disappointed in into the beauty you hear.

Here are some more thoughts about each track:

This is lovely - Will have this on a loop today at work. Congrats on the release!

Congrats, I can’t wait to be transported!!!

first album!??! congratulations! this is a huge milestone!!!

The vocal is mesmerizing… I can’t put my finger on what it reminds me of, but it’s ecstatic…

Loving the whole record, it’s really fun, and has a happy feeling that reminds me a little of some of Eno’s music…

I’ve always been super impressed with all of the synth engines you create (bitters, onebit, bite) and now just blown away by those engines in context. every single track is a hit in my book - they are all immaculately sound designed, orchestrated, performed. I also love bass and for me every bass line was top notch syncopation and movement. my favorite song is “Breaking Philip” and after reading your description I guess it makes sense its my favorite because I love Glass. the chord changes are beautiful and elongated and surprising which is the best combination. also I can’t believe this is your first album! I look forward to all your future work.

Thank you, thank you, thank you! I’m very touched especially that you liked the bass lines. I feel like bass is very important, and actually I wouldn’t have put it as one of the aspects of songwriting that I feel comfortable with yet. So it’s gratifying to hear that I managed well enough

One of the best parts of making things like the synth engines I’ve done is exploring them later. I appreciate tools that are both welcoming (or at least intriguing?) and deep, so I hoped to design bitters with that in mind. Having the “cheat codes” of having designed it, I was especially gratified to see how far you can take it, especially with judicious use of effects.

I just got word the other day that Learning To Run is live on streaming services (or at least, Apple Music, YouTube and Spotify, and should be basically every other place soon if it’s not already there), so if you prefer to listen that way, you can!

Thank you for putting it on Apple Music!

I know it’s not something everyone is comfortable doing, but it’s really awesome to be able to click on a recording and it’s on your phone…

Anyw, I was just listening to it while freezing on a dog walk​:sunglasses:

This is pretty nifty
I’m Searching lines for reading material as I often
Do
But, this time I’m listening to your music while surfing lines !!!
Perfect soundtrack to lines if you ask me
Good stuff Not quietly stood out to me

great production style @alanza . It probably is just in my head, but living in nyc for a decade, this album def captures some sort of it’s energy. So authentic…

Been listening to this on a loooong drive today and I like it a lot, my favorites are Me (love your use of filtering and reverb on that track), Nowhere and You.

Thanks for all you do. Looking forward to enjoying your album!