in a feat of terrible cable confusion I accidentally plugged my Aleph into my Eventide pedal power supply, I didn’t notice at first because it booted up fine… which leads me to ask … should this work - can it work - would it damage the aleph? The included power supply is rated for 2.7A , but the eventide only puts out 500ma .
@tehn @zebra what are the actual power demands of the aleph for safe usage?
(i’m thinking that if it works i could run almost all my kit from a GigRig power distribution set up as they have some eventide capable modules)
thanks in advance for thoughts!

it will vary based on the power use of anything plugged into USB. i’m not sure what the absolute minimum requirement is, but i don’t believe you’d damage the unit by underpowering-- it just wouldn’t work.

also the mA rating isn’t the only factor-- what voltage is it? i believe the shipped supply was 9V, but if you use a higher voltage with lower mA you still may get the same wattage.

ah ok great… usb wise i only have a usb midi adapter cable plugged in (one of those tiny alesis ones) which i wouldn’t imagine draws much at all. The power supply is 9v.

just to chime in and agree. though, i wouldn’t be too cavalier about under-supplying; the MCUs have brown-out protection, so there should be no risk of corrupting internal flash, but e.g. your sdcard might be unhappy, and i’m not sure about the screen, screen driver

i’ve used 9v, 500mA with no problems, and nothing on the USB ports.

but yeah, the huge power supply is to allow bus-powered devices, like older 128 grids at full brightness.

I bought one of those adjustable power adaptors rated at 3 amps with settings for 9.5V and 12V. Looking at the schematic I saw a LM2678 which is rated up to 5 amps. Is it safe to send 9.5 V and trust the DC-DC regulator will do what I expect? I haven’t opened the case yet because (lame excuse) I’m impatient and don’t have a hex wrench until Tuesday

3A should be way more than enough. ratings are high so it can deliver lots of usb bus power if needed

Heh, I can power a raspberry pi off the USB bus!

Yea! It turns on and makes a sound. It also literally powers a raspberry pi from the USB port (not pictured)! 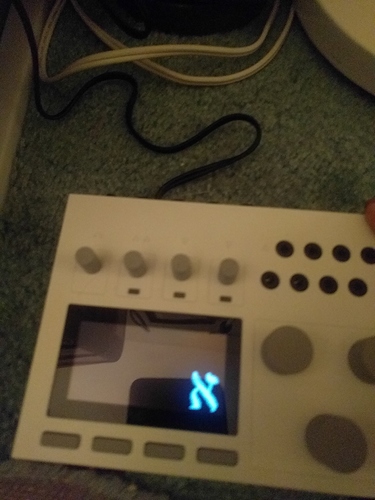