not sure where to put these at the moment, is there a new repository?

these are still a little idiosyncratic but might be useful to some. One is weird, one is simple, best to have a play

for both of them you may want to adjust the del->dac parameters to suit your set-up.
At the moment they sample from ADC0, del0 goes out of ADC2 and del1 goes out of ADC3 (to allow for external mixing) in crusher I think they also both get get mirrored on ADC 0+1 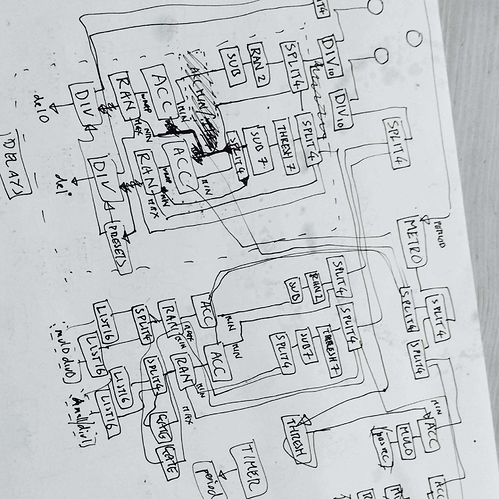 duncan these are amazing 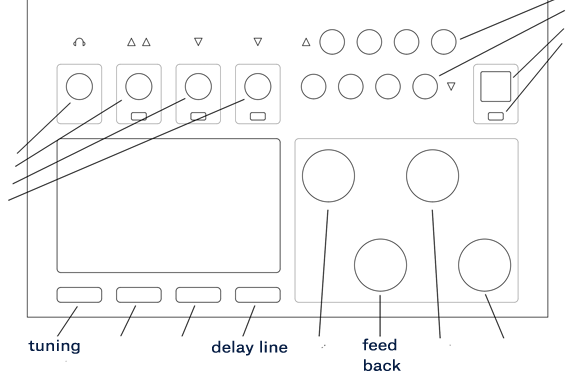 thanks for the scene! you mention no-input self-oscillation. does that mean that the scene will generate sound on its own? if so, how does go about initiating this.

as a warning, it can get out of control pretty fast (destroying your ears/speakers) but i find beauty in the resulting sonics

no-input is really a misnomer…there is always input when using a mixer as the sound source. its just a geeky way of saying there are few, if any, EXTERNAL inputs in the signal path

due to the need of portability the only thing I am thinking to buy is an Aleph.
But I don’t have any programming skills, so I would be completely dependent of existing/shared Aleph scenes. So my question is: how many freely available scenes are to be found out there? Is there an overview of all available scenes? I couldn’t find anything.

hmm… you’re right… all the ones i shared before seem to not have been transferred from the archive pages (which also seems to have disappeared?) to the new aleph pages @tehn any chance of making them accessible again… or a new place to upload them?

programming wise you can make lots of things on the Aleph without any ‘coding’ just by using Bees, (it’s just choose what you want to connect to what kind of stuff)
the tutorials are a good place to start.

I had informally proposed collecting aleph scenes on github here - [aleph-community] (https://github.com/aleph-community). The idea was to create something similar to the monome-community area.

One challenge with collecting aleph scenes is ultimately which version of bees is a given scene compatible with.

It could be a side note which bees version is compatible.

any chance of making them accessible again… or a new place to upload them?

where were they originally? i quickly looked around but didn’t see where they’d be.

github is where we should put them.

they were all in the sharing section on the old monome/aleph site… i think @zebra but some of them on github though actually?

i think the ones i had on the sharing site were for early bees version so may not be super useful! (prob would work with some tweaks) - was here http://archive.monome.org/docs/aleph:bees:sharing11

@tehn i’ve got a bunch i use regularly now… where on github should i put them? where @ngwese suggested on https://github.com/aleph-community ? how does one do that? (sorry… i still don’t ‘get’ github)

I have some old scenes I could contribute, would just need to test and see if they work with current bees/lines. Caveat: They might not be the most user friendly or computationally efficient bees patches… but hey they’ll do stuff.

Need to check, but also probably have a complete archive of all bees patches ever shared. At least close.

We should just start a thread here and do the github.

I realize that github is a barrier for many. There is a desktop application they have which makes things more friendly. If there is interest I could try to write up a short tutorial around using it.

I’m also happy post other scenes up there on behalf of other community members.

So, after reading this I am a little scared. I really would like to experiment with the Aleph but I am scared to spend more than 1000 bucks without knowing what I am going to deal with. Sorry folks, I don’t want to bother with this but please answer my questions:

Thanks @analogue01. I just wonder if other Aleph users would be willing to share their actual up to date scenes? This would be a fantastic starting point.