after searching around for the current state of linux VSTs i stumbled upon @artfwo’s recent synth project: https://artfwo.github.io/andes/ 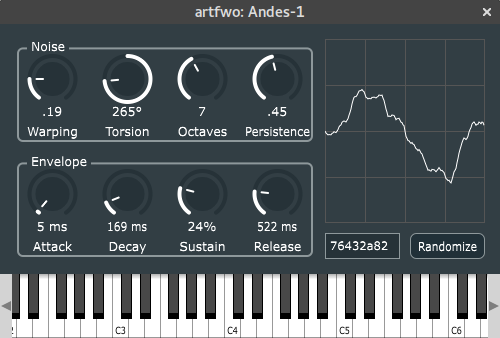 really nice digital sounds. and prompted me to go re-acquaint myself with perlin noise:

Perlin noise is a type of gradient noise developed by Ken Perlin in 1983 as a result of his frustration with the "machine-like" look of computer graphics at the time. He formally described his findings in a SIGGRAPH paper in 1985 called An image Synthesizer. In 1997, Perlin was awarded an Academy Award for Technical Achievement for creating the algorithm: To Ken Perlin for the development of Perlin Noise, a technique used to produce natural appearing textures on computer generated surfaces for m...

which gave me flashbacks to my teenage photoshop 2.0 art

Hey @tehn thanks for brigning that up

I am not talking about Andes much, because the algorithm isn’t finalised yet and any presets you create will probably break in the next version(s).

I also suggest building master instead of using the release version, because it has actual multi-fractal synthesis (warping) and 360-degree gradient torsion. But this is all really experimental at the moment.

which gave me flashbacks to my teenage photoshop 2.0 art

Yeah, used to do that as well

I am not aware of other projects using Perlin noise (fractional Brownian motion) for sound synthesis though.

But I think graphics algorithms applied to sound can produce interesting results, so it’s an area worth exploring.

Yes, I’ve always wanted to do the equivalent of running Photoshop filters on audio.

after searching around for the current state of linux VSTs

The question therefore is, is that research related to the new thing™?

Really cool idea, I’ve always been curious what Perlin noise sounds like. There’s a lot of variety and scanning through the faders sounds really smooth.

I am also super impressed with how easy this was to get running on Linux, literally just download, run, click the dropbox to switch my audio over to JACK, click the checkbox next to the MIDI controller I want to use.

Starting to understand the appeal of JUCE.

My first encounter (Photoshop filters aside) with Perlin-Noise synthesis was when reading about this module from Sonic Potions:

Yeah, seen that one too. Looks interesting, but it seems to use analogue noise source. Perlin noise in Andes has predictable randomness of the waveform (which is also preserved when you play it back on another architecture/OS).

Bump: I’ll be giving a talk about Andes on this year’s Linux Audio Conference in Berlin. Come say hello