Did it; got an Ansible and Grid.

Largely, with a little patience, it’s making sense. Wonderful interface, and having four tracks of CV out is just splendid.

However, I’m having some technical problems, which may or may not be user error.

Pressing and holding Config 2 has no effect at all. Nothing happens, and the grid is dark and does not respond to any input.

The module and Grid also froze three times yesterday evening, necessitating a complete power cycle to get it back up.

I’ve attempted to update the firmware, which is presenting its own challenges.

Update instructions are vague about which front panel button to press and hold when powering up; I’ve tried all three.

So what should I be doing or what am I doing wrong?

Not sure about the rest but to update it’s the button to the right of the USB port. Just power up holding the button then let go. I had issues way back when I first got my white whale but once I got it it’s set up forever.

Thanks Michael. That’s what I thought, but couldn’t be sure.

Can you type echo $PATH in a terminal and paste the output.

Next up, type which -a brew and paste again please

It just returns my command prompt. Nothing else.

Try which -a brew again, and if it still returns nothing then can you paste the output of ls /usr/local and ls /usr/local/bin

Pressing and holding Config 2 has no effect at all. Nothing happens, and the grid is dark and does not respond to any input.

i can confirm this bug. it happens when running kria: neither side of the grid responds as the docs say it should when trying to change note or loop sync. this is on the default firmware, pre-1.0. will test the newest version later.

I’ve attempted to update the firmware, which is presenting its own challenges.

it looks like the homebrew installation didn’t properly set environment variables, such as updating ${PATH}. or it may have been installed in your home directory somewhere, not systemwide in /usr. according to the homebrew docs, your version of OSX is too old – 10.10 is the required minimum. you may need to grab an older homebrew download and follow the instructions for certain workarounds.

I had to make sure to not have the USB cable plugged in to the module when powering up in bootlouader mode.

Thanks everyone for the input.

Okay, so Config 2 doing nothing is expected. I’m still grappling with the upgrade. Sam, I tried the additional commands but they didn’t work, which after reading loflow’s comments, is expected.

I tried to follow and make sense of the links related to older Homebrew docs, but that’s simply out of my depth, and I don’t have the time to get familiar enough with what’s happening in there to make it work.

I’m upgrading my OS; it’s time I did anyway, and we’ll try again.

Anyone care to speculate if the freezing is related to pre-1.0 as well? I was running two tracks, nothing complicated, in Kria.

Ran the update script anyway, and got this:

Stll did not work.

I’ve tried several times, booting up Ansible with USB cord connected, with it not connected, restarted computer, tried everything again, still no luck. Nothing happening on Config 2. 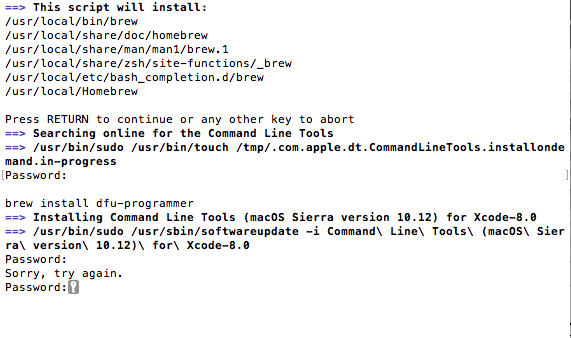 Mac administrators can use the root user account to perform tasks that require access to more areas of the system.

(Sorry, not really a Mac guy but taking a stab.)

Yep, what ppqq said. I was stuck at the password thing for a while, but you just enter your computer’s user account password that you would use to log in to your computer, download an app, or change a security parameter, etc.

It should work as expected after that!

Yep, what ppqq said. I was stuck at the password thing for a while, but you just enter your computer’s user account password that you would use to log in to your computer, download an app, or change a security parameter, etc.

Yes, that’s what I thought.

My “what password” was partly in reference to the lack of any mention of it in the documentation; to that, and to any of the other potential issues I’m encountering. I don’t script, and until Friday, had never heard of Homebrew, never used my terminal, and things like git, ruby, perl, brew, etc., mean nothing to me.

I used my standard password my Macs have always asked me for when updating software, etc., and the password was accepted–i.e., there was no “incorrect password” response–but then nothing happened. I tried it twice. The second time, I walked away for half an hour to let the thing run, and nothing happened. Then, both times, when I tried to close the terminal window, I got a warning message asking if I was sure I wanted to terminate the session.

I also tried entering “brew install dfu-programmer” after entering my password, then running the script again after booting up Ansible, and again, no luck.

My frustration level is increasing. It would be really great if someone from Monome could address this here.

The install requires an Internet connection I believe. Also, you might want to temporarily disable your security settings. This shouldn’t be an issue but you never know.

I understand your frustration with never going thru processes like this. But once you get things working, it should continue to work. So future upgrades should be a breeze.

Paging @tehn. There are a lot of threads in this forum, and just one tehn.

I also tried entering “brew install dfu-programmer” after entering my password, then running the script again after booting up Ansible, and again, no luck.

Can you paste the output please?

The install requires an Internet connection I believe.

Thanks, and I have that on that system. I was tabbing back and forth between the instructions on Monome’s site, the Homebrew site, etc.

Can you paste the output please?

Thank you too; there was no output at all. The insert point moved down one line and remained there, blank.

My frustration level is increasing. It would be really great if someone from Monome could address this here.

i’ve been keeping track, but the information posted here by other gracious users is incredibly detailed and correct-- they’ve been getting to it before i do.

first, let’s figure out if you actually have installed homebrew. did you do it again and enter your password?

if it succeeded, you should be able to type “brew” into the terminal and something besides “command not found” will show.