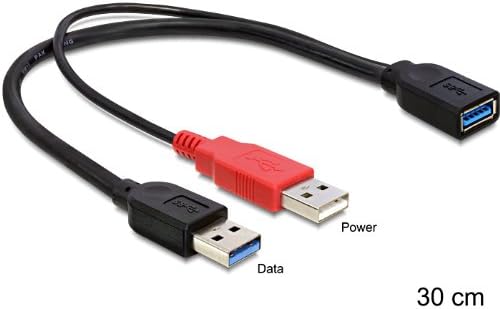 Last time I ordered, Oshpark had free shipping to EU

Could someone who already uses one of these offworld pcb things maybe post a photo of it in real life?

As a non diy-person, I have problems understanding what it even is.

As a non diy-person, I have understanding what it even is.

I’ve ordered some boards though they’ve not arrived yet. I understand it to essentially be like a 2 channel ext5v: 2 x in and out port pairs (one for grid, one for arc) and one port to connect to power.

i just created a new version of the offworld which is much smaller, for a single device. 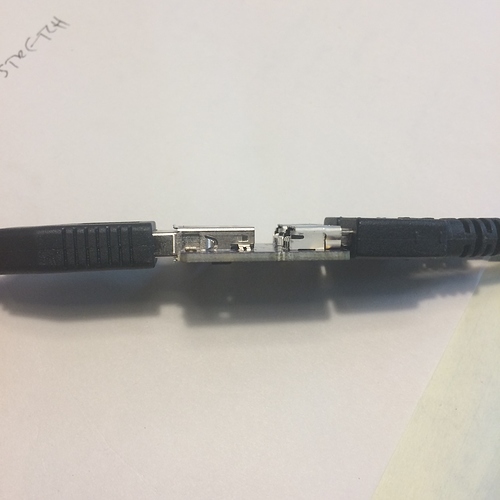 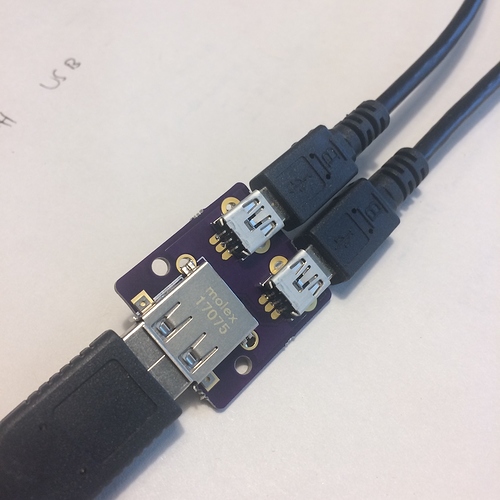 i’m making a matching plexi “sandwich” to cover the bottom and top so it’s more mechanically robust and without exposed contacts for shorting.

i’ll get the files posted soon, but i’m finally going to offer these as a DIY kit (all parts included) and prebuilt.

I’m having a strange experience with a usb splitter that @ado has had luck with.

I picked up the same one he posted about from eBay. When I plug my grid or arc into ansible with one of the two leads from the splitter I get normal operation. When I plug in with the other lead I get a brief flash of the leds and then nothing.

I tested the splitter with my phone and both leads charge the phone normally.

Thanks for posting the pic. This is a really nice solution. Definitely getting a pre-built one, when they are ready to order.

@jasper_ryder that’s correct, only one of the leads has data wire. You want to cut the power wire on the lead that contains the data wire. The other power only lead will be connected to 5V power source.

Tred following through on links yet curious to exactly what this does? Is it something similar to the ext5v?

My Teletype has just shipped today so I’m still a short time away from placing my order for a Grid.

If someone could help me understand; it is clear that the TT cannot provide power to the Grid so another solution is required. I get that the Switch is gone for good but that Offworld will fill its place.

In @tehn’s image above it suggests that I could power the Arc and Grid simultaneously, I’m guessing that the main USB connection (not the ones going to Arc and Grid) is going to some kind of USB hub or a port on a computer that can supply enough current. Correct?

If the Arc and Grid are plugged into the Offworld how do they simultaneously plug into Teletype and Ansible, are they using a Y splitting cable somewhere in the path?

It seems that Offworld might be a source of noise with some people’s setup, did the Switch suffer from the same problem?

I’m thinking about ordering an assembled Offworld when they become available as they appear to be a rarity but an essential item if one wants to explore the Teletype talking with the Grid. Is there a mailing list or will the availability of Offworld be announced here on Lines?

Read post 29-32 in this thread. There is a $3 usb splitter solution. It works fine. Sounds like tehn will be releasing a nice smaller version of this shortly.

@unity2k ok, offworld is now availalbe direct from us. i can combine your order if you want since today is a postal holiday and things won’t get dropped off until tomorrow

Thanks for making that available through Monome, Brian.

Anyone here using Ansible/Grid with a Make Noise powered skiff? Wondering if that case has the juice to power Grid without the high pitched noise.

Was thinking about picking up one of these anyway, and would be happy to make it Ansible’s home. Otherwise, Offworld here I come.

Anyone here using Ansible/Grid with a Make Noise powered skiff? Wondering if that case has the juice to power Grid without the high pitched noise.

I am, and no: the high-pitched noise is very noticeable. Hoping (and expecting) that using an Offworld-1 will sort it out.

noise problems-- be sure you’re not dealing with physical noise in your grid-- a batch of 100 back in 2015 got built with ceramic caps on the power lines which make a physical sound coming from the grid.

some 2015 grid users have reported a high pitched noise coming from the grid when lots (and lots) of LEDs are lit up. i’ve identified the problem and a simple fix-- the problem is that in these new builds, the type of capacitor was incorrect. two ceramic capacitors were placed by the boardhouse instead of tantalum. we didn’t catch this error during inspection as the grids function perfectly well-- but for the sake of making these grids more perfect, here’s what needs to be done to reduce the pot…

Tried this and it didn’t work for me

if i plug the grid right into a phone charger, it seems to get power (does the little animation when its plugged in) but it doesn’t seem to be getting anything when i run it through the splitter. (I’ve made sure i’m using the side with the red wire still intact.) The splitter in your picture of cutting the wire looks like it is different from the ebay picture you linked though… it’s a bummer because the noise I’m getting is significant and I really don’t want to spend 24 dollars on the offworld just to fix this

upon closer inspection…the splitter I ordered doesn’t seem to have data wires, just red and black which I assume are power and ground. that being said…shouldn’t grid still be at least getting power from the side with the wires intact? very confused

hmmm, that’s strange. The one I purchased explicitly mentioned “Both splitter USB Male can charge, but only one usb male can data transfer”. I tried both ends to see which one had the data cable and cut the red power wire in it. Perhaps you got a defective one?