Sorry. I feel look a total noob, but I’m about to install my newly purchased Ansible into my case and I’m having a very doubtful moment. Is it right that the red stripe on the ribbon cable should be turned upwards, if that makes any sense? If so, should the same red stripe allign with the -12V with the power supply, then having the ribbon cable twisted inside the case? I think it is «alligned» with both the module and the power supply on most of the other modules in my case, which made me very uncertain… Something just didn’t feel right, and I just won’t take any chances.

Here’s a picture to illustrate. 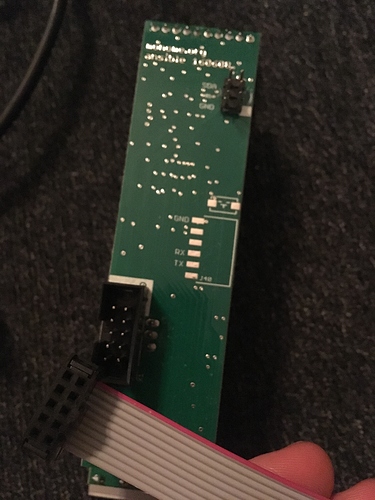 I’ll delete the thread as soon as I’m secured, so hope someone can help a nervous guy out. I’ve read the instructions on the websites and all, but I got seriously cold feet. Don’t want to blow this or any other modules in the attempt.

maybe this can help you:
https://www.muffwiggler.com/forum/viewtopic.php?t=15109&start=0

Is it right that the red stripe on the ribbon cable should be turned upwards…?

should the same red stripe allign with the -12V with the power supply…?

yes, i think so

@aroom thanks! Yeah, I know that the -12V on my bus board is located on the bottom, so the red stripe will usually go there. I think what threw me off here is that the module itself doesn’t have a “-12V”-label, if you will. I’m guessing the “white indicator” is the equivalent?

a lot of my module’s ribbon cables do a twist to plug into the case power. the stripe doesn’t always go up or down.

with a lot of modules and bus boards (ansible included) the socket has that little cut out and the cable has a little tab that fit together like a key so you actually can’t plug it in the wrong way.

so you’re right about how to plug cable into the ansible. that white strip is the indicator. and it’s not uncommon that the cable would twist to be properly aligned with the case power.

Align the 10-pin ribbon cable so the red stripe corresponds to the white indicator on the rear of the module’s circuit board.

Thanks @stripes! Been a little while since my last installation, and it kind of threw me off without the -12V label. I see now that the white indicator is exactly that. A little embarrassing but I couldn’t risk (or afford) a hick up! My Grid 128 is yet to arrive but thought I could fire up the Ansible with another midi-keyboard in the meantime. 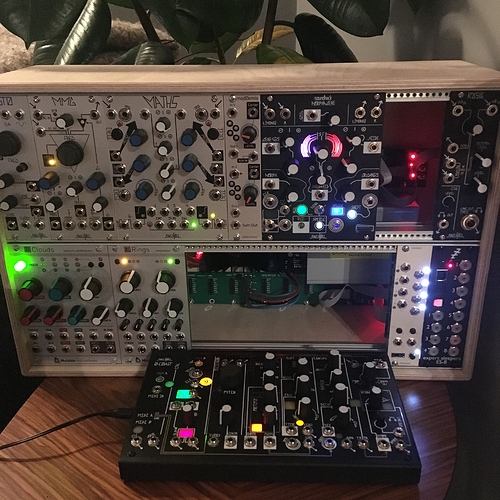 note also that the connector pictured is keyed and, because the cable has been made correctly, it will not go together the wrong way easily. That nubbin sticking out will only lock in one way. you’d have to force it had to put it in backwards.

(note that you can’t trust a locking connector entirely; if the cable is made wrong (ie, upside down), all bets are off. but the cable you show in the picture is correct).

edit: doh, I see now that @stripes got there first with the keyed connector, and I missed it. apologies!

Yeah, it would be impressive to manage to connect that part any other way, haha. But yeah, I was actually thinking it could have been made wrong, or that somehow there was a wrong type of ribbon cable (if there is such a thing). I mean, the box with the module didn’t provide screws, so I thought maybe some parts had been switched or removed by mistanke by the retailer or something. Anyways, it turned out nice : - )

That being said, i didn’t have too much of luck with plugging in a midi-keyboard (some cheap AKAI). It did provide CV, but not in a stable manner, as the lights went back and forth on the different outputs. Tonight I just wanted to patch something up and jam out, so I didn’t investigate too much, just assured it was working. Will look further into it tomorrow if I get the chance! Can’t wait to receive my grids, tho!

It did provide CV, but not in a stable manner, as the lights went back and forth on the different outputs.

That’s typical behavior for polyphonic MIDI-to-CV voice allocation. But there are other modes. Check out the difference between Allocation style 1 through 4 in the docs (Cmd-F for the 4th instance of “MIDI” to jump straight there):
https://monome.org/docs/modular/ansible/

Cool. I guess I haven’t covered that part of the docs since I didn’t expect to be needing it for MIDI-to-CV duties, but this is really cool. Going to give it a go in the morning! Thanks @jasonw22

Don’t feel bad about checking. I got a batumi and the keyed header was wrong.