Hello Lines community. I was wondering if someone could help me with this-

I have set up some scale presets for my Ansible running Kria, so I can do key changes quickly. Only problem is, when is go from one preset to the next, the same notes from the last preset are still being played, and the key signature is not changing until I manually press the root note key.

For example, my first preset is in F Major, and my second is in D Major. When I switch from the 1st to the 2nd, the notes values are still playing in relation to F Major until I press the D root note on the scale screen.

I’m wondering if I’m doing something wrong, or if I just have to manually press the key each time. Has anyone else had experience with this?

do you mean when you do a full preset recall? via the front panel push button?

i can imagine a case where a bug might be there. i can check, if that is indeed the issue.

Hey Tehn, yes it is when I do a full preset recall with the far left keys on the grid.

When I first used Kria this was happening to me because I thought I could edit the scales for each preset, but actually the 16 scales apply to all presets and so the scales needed must be set globally and then chosen, per preset…
If this isn’t what’s happening, my apologies for butting in, but I did have a similar dialogue with @tehn a few months ago.

Hey Lloydcole, Ill check on this but I’m pretty sure I set it up to where each preset has its own scale, each of them are different from the other and I saved them that way. Just when I change to a new preset somehow it’s playing the correct new scale just relative to the last root note instead of the new one. This continues to happen until I push the root note that’s already lit in the new preset. Kinda hard to word it all haha!

I’ll make sure and read your previous conversation to see if I can get some knowledge from that too.

Does somebody happen to have a list of the preprogrammed scale presets in the first few slots on the latest firmware handy?

This is an old post, but at least the first few seem to line up with this list.

Is there a resource that shows (graphically) a range of scale patterns for Kria / Meadowphysics. It would be amazing to have a visual handy for quick reference

Do you mean in staff notation?

yes, for the scale editor. I had a visual reference for the Rene module, and it was really useful.

I made a quick visual reference of scales for ansible. I’m not sure if it’s 100% correct but I’ll post it and hopefully someone on here can check it?

Here are the scales documents i made while trying to understand the scale builder. Could someone check it?

Bumping this to say that I’ve checked out the attached pdf and it’s exactly what I was looking for, but it doesn’t seem to match what’s currently in Kria in terms of Kria only having seven rows for scale note selection since the bottom row is still the navigation row. Is there something I’m missing or is there an updated version of this document out there?

I used the image from the ansible manual which was for meadowphysics. So the top row can be ignored. I should do an updated version at some point which resembles kria.

did you ever get round to this? #fingerscrossed

Thanks for the .PDF “cheat sheet”.

With the release of Ansible 3.1.1 I noticed that the layout is quite different in Kria and also seems that only there are now only 7 preset scales and 9 blank scales (not the older 16)

Looking at the SRC it seems these are the scales.

Any chance of an update to your PDF and/or on the website?

Attached is a pic I took of the scale set-up page on the latest firmware as a reference. 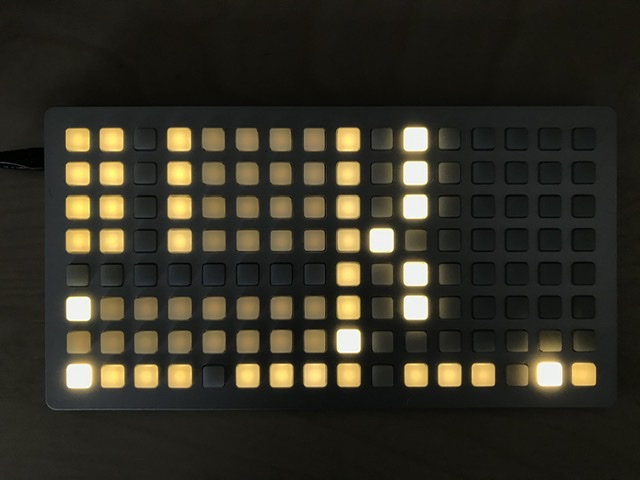 Yes, the cheat sheet is now out of date due to the newer firmware.

I’m in the middle of updating it, which is when ever I get a spare minute between work and patching

Thanks for the pic, that helps a lot and will speed up my layout.

I had a bit of time this afternoon and so I knocked this together based on what I could glean from the source code and also @Puscha detailed video (Thank You!).

It looks to be accurate, not sure the nomenclature is correct, but hope this might be of help to other visual learners. 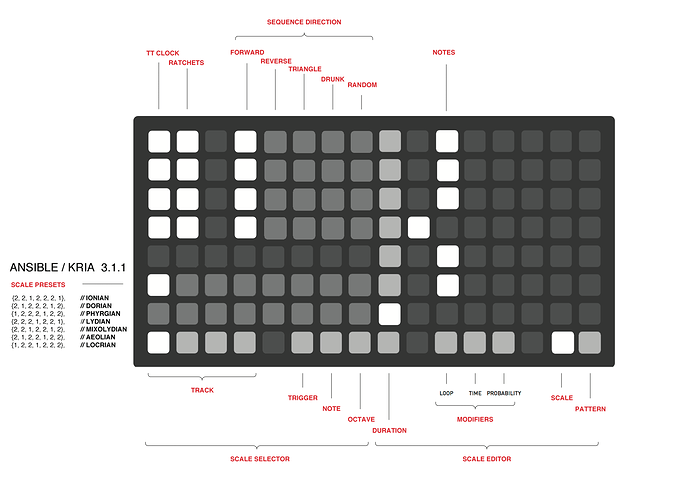 @mattallison Very nice.
I was using @Puscha video too!
I’ve changed my layout for the cheat sheet a little bit but I’d love to use your image of that ok?

You’re most welcome to use it, and anyone else for that matter, that’s why I put it out/up here!