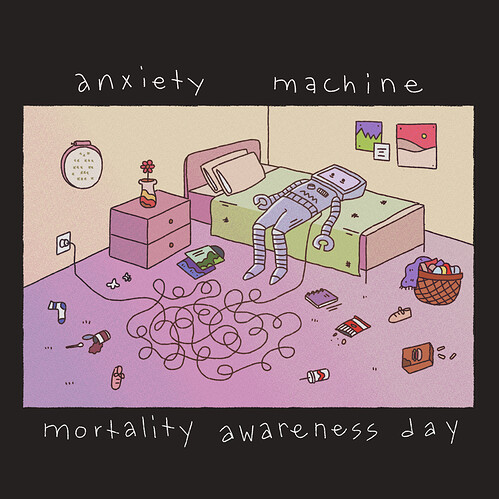 anxiety machine-Color3850×3850 4.78 MB
I have a new record of ambient-adjacent, beat-adjacent songs out now on quote unquote records, bandcamp, and all the streamies.

this is very much influenced by lines. diving into the many discords, the live streams, reading as much as i could every day. i appreciate all the posters here and everyone’s insight into creation and tools. there’s norns on the record, the eurorack system is an evolution of a mannequins/monome rack that i bought on the trade board - this message board and community have been a positive beacon during our Worst Year.

even though this is an instrumental record, i wanted to capture some level of the “what” and the “why” of the sounds in a manner of liner notes.

how ya been?
i’m bad at staying in touch with people. a call.

nostalgia hammer
guitar + pedals. i recorded this by mic’ing an amplifier and slapping some pedals. i really like that you can hear the buttons clacking a couple times. this song is ~about getting stuck in a loop remembering & thoughts of your past (better[ish]) times getting caught in your skull.

i am never going to die
ableton + samples of past improvisations. this song is inspired by thinking, while doing something like driving a car, that death is something that happens to other people.mortality awareness day
0coast + mother32 + pedals. if you’ve ever counted the number of noses you’ve seen at the grocery store, you get where this one is coming from.

bird teeth
mother32 + norns (cheat codes). last year i committed really hard to message boards, and found lines. i thought this one sounded nice and it sounds like birds talking to each other. there might be a deeper meditation here.

obligatory dream sequence
norns + dx7. norns was sequencing the dx7 while i also played along to it. i’ve really enjoyed the realization that we can collaborate with gear just as much as make it do what we want. norns was playing a (somewhat) random sequence in key, and i played along, but at this point i can’t tell what notes were my choice and what came from the machine. this song is ~about waking up every day and that seemingly being the only constant routine anymore.

reality whiplash
modular synthesizer, just friends + mangrove (& more etc). i took the plunge into eurorack last summer. after thinking about it for a few years. at that point, it was in the early(ish) parts of quarantine and my brain was a sponge. replace times of dread with learning and experimenting. pretty sure this mood came about when i was worried about all my friends on the west coast being surrounded by fires.

bad day trilogy
modular + sp303. three variations on a similar patch. these came about on the day that all the q anon psychos stormed the capitol. writing this now, i think about the confusion, and also lack of surprise, of that day. disappointment burnout/overload. i dont know if i specifically tried (or succeeded) to capture that.

brain fog
modular (heavily featuring Data Bender). stressed out that i am unable to form a sentence without getting distracted by something.well, you know
a response. cello + pedals. we’ve gotten to the point where you don’t have to say you’re sad or worried or scared when making small talk.

thaw
modular. everything ends! even bad stuff!
keep coasting for as long as you can
ableton programming, with phasing loop lengths and different probabilities and random chances. let the machine play itself. haha maybe i’ve gotten used to staying home? maybe i’ll go to a public event and leave early?

shoot me a message if you want a bandcamp code, or download it for free from quote unquote.

Thank you for sharing! I will definitely check this out and come back to read through the patch/track notes.

Which gives the bigger % to the artist? Quote unquote or bandcamp?

This looks awesome–Imma check it out after I find out about my question ; )

I saw the title of this thread and sat there with my finger on my trackpad genuinely unsure whether I wanted to click the link or not… wondering if engaging with an “anxiety machine” was something I wanted in that moment…
Turns out I did! lol

quote unquote is my friend’s digital label that he’s run for a long time - 100% of donations go to artists there. it’s pretty great! thanks for checking it out.

What a wonderful album. And I really enjoyed reading a bit about each track too. Thanks for putting this out.

oooof the cello on this hits so hard, love it !!