Anyone using a Monome with Reaktor?

If so, how and what’re you doing with it?

I was also thinking about it the other day, all tho I currently do not own a Monome, I think you’d be running Reaktor as a vst object in max and go on from there. Should be pretty much the same with the other DAWs i guess.

Also works to run Max and Reaktor standalone, with monomebridge running in Max.

Hey,
it seems like the monome community is more associated with and oriented around Max MSP, but I’m wondering if some of you guys have incorporated Native Instruments Reaktor 6 with a Monome/Eurorack set up? Especially now that the new Bloks update is geared towards having Reaktor incorporate hardware, this seems a likely route for me. Interested to hear what other people have done.

I’m told that Reaktor’s OSC implementation supports number based messages only, and the serialosc protocol that monome works with relies on more complex OSC messages.

So you’d need a proxy layer between serialosc and Reaktor to do some translation between the serialosc protocol and the type of OSC messages that Reaktor expects. Doable, but not instant. I haven’t heard about anybody actually having done it yet.

Got it, I am not very knowledgable on this topic, honestly this is my first time hearing about OSC data but from the quick research I just did, it seems that there are different OSC data types, and that Monome and Reaktor run on different date types? I read on the NI forum that Reaktor is compatible int32 and floating32. I saw no reference to serialosc though, is this something specific to Monome?

Yes. It is documented here:
http://monome.org/docs/osc/

Ahhhhh I see now, I had looked at that but now I understand that Monome made it for their products. Thanks!

If anybody knows anybody at Native Instruments, it would be great if Reaktor supported the entirety of OSC.

I’ve integrated Reaktor with my Eurorack setup, but not the Grids controller directly. If it helps, I can use the Grids to control the Monome modules, which then interact with Reaktor. Here’s a video breaking down some of my process:

assuming you have access to the software - how about running reaktor as an ableton live plugin alongside a grid-oriented maxforlive patch? i might try that out today…

yeah this was a thought that I had, eventually i would like to use the grid as a controller for Reaktor as well, but from what @jasonw22 said it seems like I would need to have/make a program that allows the two to talk to eachother.
btw awesome that you work with Curtis Roads, my friend introduced me to his work when I was 15 and hearing him talk about granular synthesis and his compositions really amazed me.

Do you have the Blocks you have made up on the Reaktor User Library?

Yep! The current collection is over 120 Blocks. You can find them here:
https://www.native-instruments.com/en/reaktor-community/reaktor-user-library/entry/show/9093/

A few of the older Blocks need icons and descriptions, but other than that there aren’t major reported bugs at the moment.

Also, agreed. Curtis is a great guy. If you haven’t read his latest book “Composing Electronic Music: A New Aesthetic,” I highly recommend it. https://smile.amazon.com/Composing-Electronic-Music-New-Aesthetic/dp/0195373243/

He’s working on packaging his past decade of compositions into a new release. It might not be out for a while, but I’m excited to have these become publicly available. To hear most of them, you had to be at the right conference or academic concert at the right time.

Ooo! Very exciting indeed! I will definitely have to pick that up once it comes out.
And thanks for the suggested reading material and Blocks modules! Very much looking forward to hooking up the modular with Reaktor now!

Michael, you are a really, really helpful guy. Thank you for your blocks. You must be petitioning for sainthood.

Euroreact was the toolkit that let me sandbox with modular in a way that led me to finally take the plunge and get a eurorack system. I just plugged in my Isms system today for the first time.

In terms of getting things to communicate, I had the same idea as you: having the modules communicate with reaktor via cv and bypassing the osc translation issues. Unfortunately an expert sleepers module won’t fit in the isms case, but I do have a motu 828 mk3 that will let me send and receive DC coupled signals. That’s 8 ins and outs right there (leaving IO for monitoring and instrument ins), so I’m eager to get back to Chicago and hook it all up.

Euroreakt also helped me get to terms with things that sound confusing on paper but instantly make sense with a demonstration, such as an analog shift register. Thanks for your helpful demo ensembles, as they got me translating my musical ideas into patches pretty quickly. After watching how Kaitlyn Aurelia Smith and Cortini both use the Buchla Easel—namely with an ostinato coming from one side of the complex oscillator while they use the touch keyboard to improvise melodies with the other osc—I wired up this ensemble. Documentation in the ensemble-level info pane.

[EDIT: Upload repeatedly froze around 15%. Bummer. Screenshot posted instead. Sidenote: why are these ensembles with the new west coast blocks so huge? Like 50+ mb] 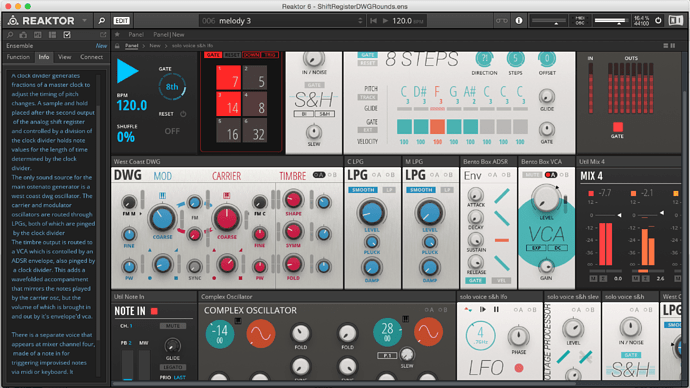 Awesome! Really happy to hear that you’re enjoying them. I randomly stumbled on a YouTube video of it tonight that made me really happy.

The ensembles are gigantic. There’s no compression in the Reaktor save formats, so every. single. knob. frames. is saved multiple times. If you put them in a .zip file, that compression algorithm should identify most of the redundancy and greatly reduce the file size. Euro Reakt is around 1.5 GB uncompressed, but about 130 MB when I zip it up for uploading. Looking forward to checking out the ensemble!

Oh! Thanks for teaching me how .zip files work, too, with the redundancy being parsed out. Michael, everyone. He’ll be here all week!

It zips to 7 mb, but that still exceeds the forums ~3mb limit. Oh well. You could probably imagine a duophonic ASR ostinato playing each side of DWG if you had to

The trick with it was that, in addition to the pseudo-duophony made possible with the ASR, I use a sample and hold triggered by a rotating clock divider to grab notes from the shift register and hold them for intervals related to the original sequence. That way it’s not just a row-row-row-your-boat kinda round situation and instead has some rhythmic complexity, even though it’s all just the original sequence folded back on itself. I also use a second clock division and another adsr with a long release time to trigger an additional wavefolded layer of the carrier sporadically throughout the sequence to add sauce.

Nice! Have you checked out the Squid Axon Block? It’s based on the module (with permission) by Nonlinear Circuits. It’s an ASR with feedback knobs (one non-linear and extra fun). The core ASR functionality is different. Instead of always passing voltages down the chain, each stage needs to catch up first. You can see this behavior in the scope shots here: http://nonlinearcircuits.blogspot.com.au/2016/03/squid-axon.html