So here’s the new thread for The Party Van (as moved over from the old thread on the monome forum : http://monome.org/community/discussion/13620/app-the-party-van/p1.

The Party Van is a live sampling and performance instrument built using Max. It was programmed around the Monome 64 and Arc 2 controllers but includes mapping for an iPad running TouchOSC (custom layout included) as well as the Keith McMillen Softstep foot controller. The patch will work just fine with larger Monomes and Arcs. Additionally, the patch has MIDI learn functionality built in, so every parameter can be mapped to any MIDI controller. Finally, control output of a Shbobo Shnth can be mapped to The Party Van as well. 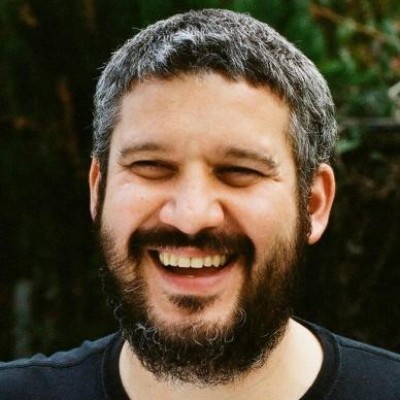 The Party Van is a live sampling and performance instrument built using Max. It was programmed around the Monome 64 and Arc 2 controllers but includes mapping for an iPad running TouchOSC (custom l... 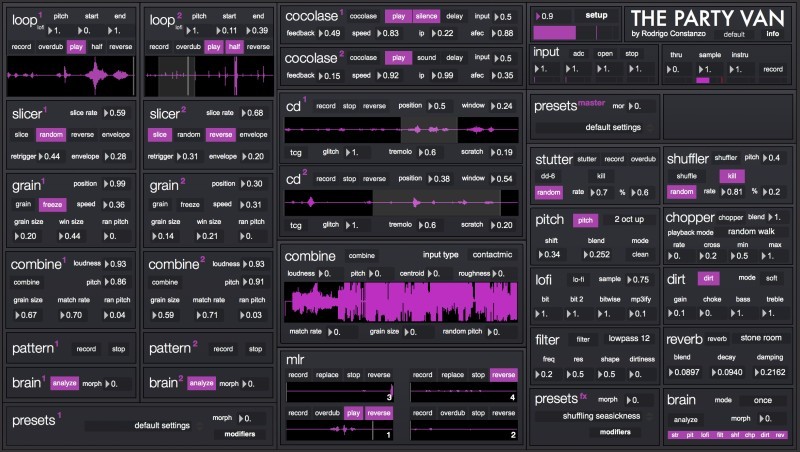 One of the greatest apps! Love it! Thanks for making this incredible tool.

Is there any easy way to send audio from a different max patch into TPV? I know the send~ and receive~ objects should work i’m just not quite sure where it would go on TPV or if that’s the best option. I’m trying to use TPV as an effects processor for a set of prepared samples. Any help is appreciated, thanks again!

If you use multiple versions of Max (5/6/7) you can use soundflower or jack audio or something like to that to route audio between them.

Or you can look inside the input/output subpatches and just add send~/receive~ stuff in there.

Alternately you can just strip out the input/output effect sections and their required subpatches/abstractions/polys and stick them in a new patch.

Adding the receive seems like the most elegant solution but i can’t quite figure out where to attatch it in the input subpatch. Putting in the first p mixer input gives a reading on the meter in the patch but nothing in the full patch.

Got it, just wasn’t working because I hadn’t saved yet. I didn’t think that mattered. Thanks again.

Hey Rodrigo - not the first time I’m saying TPV is amazing. It is amazing.

So amazing that I’d like to be able to run two instantiations of it with quadrants, one for piano and one for guitar. How would I do this? Make two copies and then change the party prefix throughout to party1 and party2?

Hmm, never used quadrants before so I can’t comment in detail. I did update the serialosc stuff so focus changing should work as is intended.

Anyone use TPV with quadrants before?

Another issue I’ve noticed with the party van is a lot of crackling noises and dropouts when playing pianoteq through it (using soundflower) and also a lot of latency - sounds are output from tpv after as much as half a second after they are generated by pianoteq… I noticed similar behaviour when using VSTs as well. Soundflower problem? I’d be grateful for a pointer here. I did change the io vector length settings (to 1024 for both vectors), which seems to temporarily solve the problem, but then after a bit of inactivity it comes back. Hmmm…

i had similar issues with soundflower.
now i use jackaudio and it’s fine ( the set up : aalto feeds the party van)

That sounds like CPU problems. If you’re using pianoteq as a vst you can load it directly INTO the party van. Just select ‘vst’ in the input menu, and hit ‘open’, and it will let you select the vst.

I’ve never been able to get pianoteq to load as a vst in TPV. But no worries - jackaudio seems to have solved the problem.

From my many experiments with TPV i’ve been finding myself wanting to adjust the volumes of individual modules after a buffer as been recorded. This doesn’t seem possible and I was wondering if it’s something you thought of and decided not to implement for any specific reason? It definitely ads another level of control that can be hard to keep track of but I often feel an itch to remix buffers especially when one input effect will make that recording a lot louder than another that gets all covered up. I’m sure I can implement it myself, just checking to see if you had any thoughts first.

It was for UI/design reasons, just not to clutter things up and keeping things as loud going out as they were coming in.

Or did you mean other modules?

Ah, that sounds good. I think i’ll make a touchosc layout for my phone with those wtpa volumes. There’s no CC’s for the CD part is there? Those can tend to get a little loud.

Also, i’m planning on putting out a release in the next month with all music made improvising live through TPV, i’ll be sure to let you know when that’s done.

There’s no volume control for the CD modules, but the ‘glitch’ parameter controls the volume of the actual clicks.

hello. tpv freezes max every time i open it. i’ve checked it few days ago and everything was just fine. yosemite 10.10.4, max 6.1. i wonder if this is happening because of upgrading osx.

It shouldn’t be. I’m on the latest OS X and it works fine. It doesn’t work in Max7 but that’s not the case here.

Is it crashing or freezing?(crash report?) and

its freezing. everything else works fine. i’m running kaivo and some processing max patches without any problems.