Can’t you isolate any problems? (ie TPV with no monome or MIDI devices, different audio/IO settings)

Did it work when you were on a previous OS? And do you have the latest (1.1) version of TPV?

it did. and i’m running the latest version of tpv.

Ok this is weird.

This is a bit faffy, but can you try removing the following files one at a time, and then retrying to open it (to see if the problem is one of the heavier processing units).
cccombine.maxpat
chocolate.maxpat
combine_core.maxpat
tcg_abs.maxpat

i’ve tried it and its all the same. 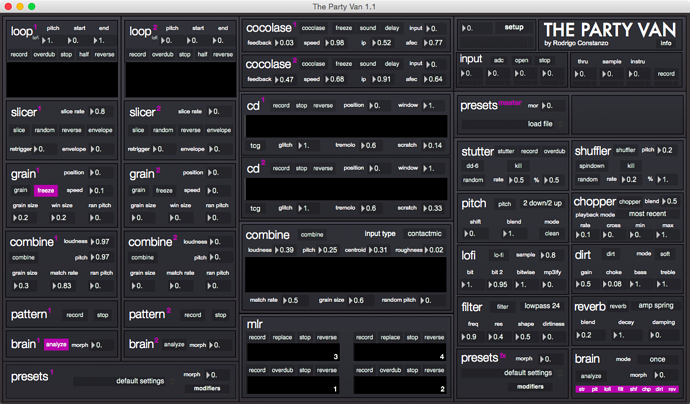 Wait, that’s with those abstractions removed? A bunch of the modules wouldn’t/shouldn’t even show up (combine, chocolate).

Does Cut Glove open/load ok? (it’s significantly smaller, but be good to rule out other things too).

nope. i’ve posted this pic just to show how it looks before it freezes. correct me if i’m wrong but the grain2, brain2 and brain (effects) are usually lit on start up just like grain1 and brain1 on this pic//

Yeah I see. It also looks like a bunch of stuff didn’t get loadbang-ed either. (Many parameter all over the patch are still at zero).

Can you try opening it while holding shift+command (to bypass all loadbangs) and see if it opens?

Many things won’t work, and you’d have to manually set volumes and stuff, but see if this at least opens/turns on.

sorry for not being here f some time/ so i’ve opened it with shift+command and it worked. still don’t understand what’s wrong. i’ve reinstalled everything on my laptop btw.

Ok so something was loadbanging it into crashing. If that’s working for now, that’s great! I’ll keep my eyes peeled on what could be causing that problem.

Either way, there will be a big update at some point so it finally works in Max7.

ok. me give up. i’ve opened it in max7 without any problems. some modules are off but at least it works. it fucks up cpu (100%) and doesn’t see my grid in max6. will wait for the max7 version.

curious if update is on it’s way. i kinda miss tpv in my process.

Intended, yes. In the middle of wrapping up a really big project (PhD thesis!) so it will have to wait until after that.

I’m mainly waiting for the Harker externals to get updated as I suspect there is an issue with them in Max7, hence the crashing. 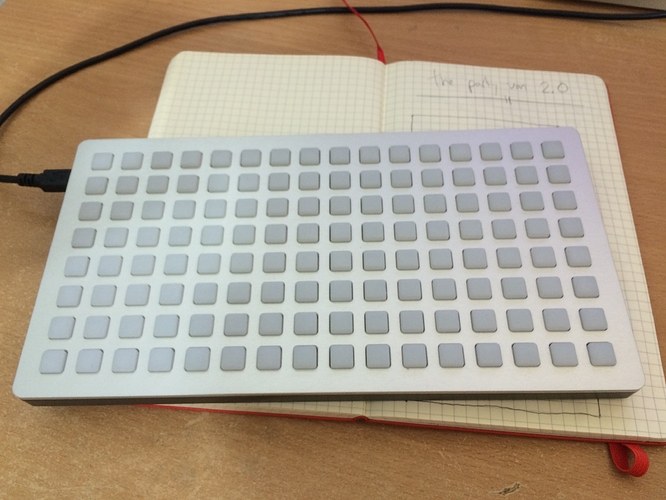 I hope it won’t be variable brightness only

It will be designed around the varibright 128 but it will have downsampling to monobrightness like the previous TPVs.

Once I have some rough ideas of what I’m going to keep/add/ditch I’ll post them on here to get people’s thoughts. There’s several sections which I haven’t used in years which I’ll be dropping, and of course lots of new additions building off the big changes in Cut Glove.