I like to record things a couple of octaves higher and then slowing it down a couple of time to get the good notes and speed. Some filtering on it is always nice. Most of the time im using cheat codes for it mainly because im famiar with it. Altough only using maybe 10% of it.

otis has some nice sound design features for input like sample rate reduction, noise, overdrive, etc. It is modeled after the cocoquantus looper, a very lofi looper/delay.

pedalboard has a host of units that can be used together for adding modulation/overdrive/compression. use slow lfos to modulate things to add warble.

Yup! Pedalboard even has a literal Lo-Fi pedal.

It’s also got a pedal using the open source code from Mutable Instruments Clouds, which has a Lo-Fi mode. Here’s a post with two sound samples using both of those pedals Pedalboard: Chainable FX for norns - #47 by 21echoes (it’s also going thru a pedal based on Mutable Instruments Rings, if you’re wondering why the piano sounds very… resonant)

what sequencer scripts do you use to output midi? testing out on mi plaits to output generative sequences to play guitar along with, so the less hands on with norns the better.

I am interested in the norns (more specifically in norns shield as I can’t afford a full norns) as an open source and hackable instrument to replace a novation circuit as a device for exploring ideas on and jamming with, but could norns+grid (I already have a grid) actually replace circuit, in being able to have a groovebox-y workflow to make whole (simple) tracks with as well as the fun generative stuff? I understand that norns supports scripts so anything is possible but does a script like this already exist?

There are a few scripts that can do this - I’d start with Thirty-three which is a PO33 clone, but you can have multiple “pocket operators” running at the same time. There could be other scripts that cover what you need too, but I’m not sure if there’s an “all in one”.

You could craft your own script to do this, but it would be a piece of work.

TBH though, my feeling is that Norns isn’t the best platform to replace something like the Circuit.

The norns does it’s own thing really well, and the Circuit (and other grooveboxes) do their thing extremely well too and they would complement each other well, but don’t replace each other that well IMO.

the deluge is very expensive, and I’d like a norns for the things norns does too - but I’d like it to be able to do what circuit does for me too as I couldn’t afford one without selling my circuit, even if it does a worse job at that specific task (grooveboxing) it’s more flexible while the deluge is just a more expensive box that only does grooveboxing.

Don’t go down this route. You’ll be disappointed. Norns and grid are great together, but they come nowhere near a groove box flow and especially not the Circuit flow. As much as you’d want this to be so, it won’t be.

Get norns for what norns is, not for what you’d want it to be.

i would also discourage the mindset of seeing norns as a potential replacement for other stuff. especially when the other stuff is highly specialized hardware with a specific interface surface, implementing a highly polished iteration of a very “traditional” musical interface.

norns is 100% designed to support new interfaces and custom instruments that the framework’s authors cannot imagine. it is uncommon for a script author to want to spend many hours emulating an existing device, but it does happen.

the more common scenario is to implement something with much smaller scope that just does the exact thing you want.

that said - of course one can implement something that looks like a single-track deluge sequencer on norns.

i will re-post @circuitghost’s requested specification for something exactly like this:
https://llllllll.co/uploads/short-url/204CgYHnj1d3zxcGMw8PCnRZ4fV.pdfw

but it conveys the gist of what is desired. anyone with some motivation and a little bit of programming skill can implement this on norns in a very few hours.

i and others remain happy to assist with technical questions regarding any specific roadblocks that may be encountered.

PS okay I guess I am serious about bounty for scripts.

if anyone shows me a receipt for >= $100 USD donation to re:wild (one kakapo nest box), i will implement this spec. (even the missing parts, lol)|

i will implement this spec. (even the missing parts, lol)

this sounds like something I can help with. not to say that you need help coding it by any means but I’m happy to write some lines, especially if it means supporting a charitable cause.

the deluge is just a more expensive box that only does grooveboxing.

This is absolutely not true. While I have the utmost respect for the price argument, norns with a grid, even if you go down the shields route, is still fairly expensive. That aside, the Deluge is a complete production environment. It does sampling, composing, internal and external sequencing, mixing, mastering and performance. The song mode is elaborate, the sequencing is top in class, the synth engine has its own very unique flavour and the sampling is top notch.

This is a studio in a box, not just a groove box. This is not necessarily a good thing, the Circuit’s way less distracting because of its focused nature and when I had one, I finished a bunch of tracks with it just because there weren’t all that many functional options, so you focused on the song writing.

If you are looking for a Circuit that’s not the Circuit and price is a factor, the MC-101 is something to consider. Noway near a grid interface, but surprisingly clever as far as workflow goes.

Honestly I’m not entirely sure what I’m looking for - I’m not sure I even want a groovebox workflow in reality? Thinking more about what I like about the circuit it’s less the groovebox nature of it (which I actually find has some annoying limitations) but having a hands-on thing that makes discovering ideas (largely through the macro system, on the circuit) fun - which feels like something that’s an even stronger suit of the norns with its generative capabilities? The circuit does it in a groovebox-y way, norns does it in a norns-y way. I feel like the only way for me to know is to try a norns, but I’ve no idea how without buying one first. Not like the circuit where I could get a store demo.

I’d say that norns alone is probably the most creative and flexible platform for sampling and audio manipulation that’s out there, in an extremely attractive and convenient package. There are plenty of script that can generate entire bodies of work entirely on their own, if you embrace a more free form, eplorative approach to music. Loops, textures, non-sequenced clips, that kind of stuff. You could even argue that the absence of traditional sequencing and workflow pipelines in many of the scripts, inspire you to find places you wouldn’t find otherwise.

we have a benefactor!

@infinitedigits
thanks! i think i want to approach this as an experiment: how quickly can a smash this out given that i don’t have to think at all about what i want it to do. (well… nominally.) it might be interesting to live stream that process.

(since its the weekend i may as well get to it today/tonight.)

but i’m also thinking this could be a sort of crowd-sourced-design version of a very “standard” polyphonic piano roll composer thing for norns. maybe further development stages could also be driven by charity donation calls.

it might be interesting to live stream that process.

this would be awesome!

but i’m also thinking this could be a sort of crowd-sourced-design version of a very “standard” polyphonic piano roll composer thing for norns.

I have a spreadsheet-style ui library sitting around in an unfinished project that might be applicable to this effort!

just gonan give this a go and see what i can get done before dinner
https://studio.youtube.com/video/_WpoZ8-u4bA/livestreaming

up:
i had to stop and do family stuff for a minute. probably resume 6 or 7pm PST. gonna see how far we get in 2-3 hours of coding time

up:
starting again for duration of 1 baby nap 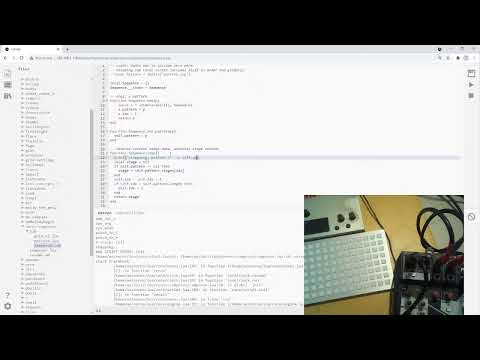 up:
nap was short. dunno if the live stream thing is a great idea. i’ll just do things in the usual way instead

I really enjoyed watching it! Currently nursing a crazy high fever from my second vaccination shot and the slightly woozy feeling and your coding was a fun combination.

also enjoyed, up until the reminder of how short baby naps can be (we have another due in 2 months)