heres what we have after 2 hours: 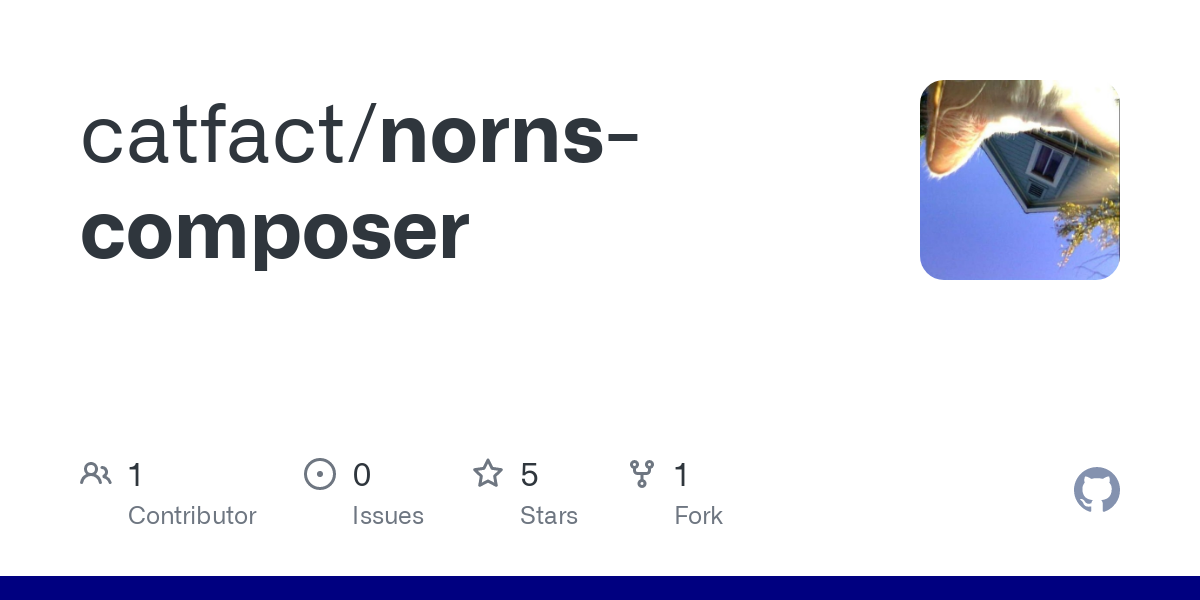 Contribute to catfact/norns-composer development by creating an account on GitHub.

TODO to complete the spec:

as you can tell, i havent actually worked on norns scripting for a while. bit more limbered up now, the rest should go pretty quick.

up:
started session 3. i moved to twitch. no reason but it just seems better for this kinda sporadic activity

up:
added pattern data persistence, pattern selection, length modifier, and some stuff on screen. i’m finding myself making inconsequential tweaks so probably time to stop now. the next thing is ties. (which will actually be a bit of a pain, def hardest thing in spec.)

Just wanted to mention that I watched a bit of the youtube stream (with a small time offset I think) and it was quite interesting, in my case mostly to have an idea of what a viable development workflow for Norns could be (and how getting used to Lua’s syntax can be a pain

considering getting a norns but basically every demo of it I’ve seen seems to be making ambient-ish music. I like ambient music but I want to make other things with norns too, are there many demos of using norns in completely different styles?

Genuinely interesting/baffling question for me.

What kind of genre studies would you expect?
Are you talking about like, dance music styles? Something else?

I mean what you’re seeing seems like the stylistic bias/tendency of a community. The fact that awake is the first script everyone sees is an accident - it’s the first script Brian made, and reflects his, I dunno, compositional strategy.

As far as strict technical limitations, there are not very many. The major one that comes to mind is that timing resolution of the control system is measurable in milliseconds - so maybe making minimal techno in the Lua layer would be unsatisfying for some. (But, you have all of supercollider to play with as well.)

I think the important to note that while norns “demos” are a literal demonstrations of norns, they are also the result of people’s creative machinations. this is huge imo! afaik there are very few hardware platforms that support such a seamless connection between wondrous musical thought and reality. that for me is one of my favorite things about norns - the environment (lua+supercollider+softcut) is so powerful and welcoming to learn, and interface so simple (small screen+audio in/out+3 knobs+3 buttons) that it easily gives life to all sorts of creative expression.

I think your question is great though - I had almost the exact same thought before I got a norns. I saw demonstrations of wrms and cranes and I really had no idea what I would do with norns because those styles of music in the demonstrations weren’t exactly what I tend towards in my own music creation. but after getting one I found a way to fit it into my style, and now I can’t imagine what I would do without norns!

I think Norns is certainly capable of many styles. I’m not going to lie… When I first got mine it just sat there. It was hard to understand how to integrate it in to other things I was doing. Eventually it started to sink in but it was a process for me. Digging in to cheat codes really opened up the possibilities of Norns for me. I also make ambient/ noisy /messy stuff with it - which I have a lot of fun making. At any rate… Norns is a computer and can be as flexible as any computer for expressing musical events and ideas over time. It’s software is shaped by the users who dig in and make stuff for it. Like it or not. Get a guitar and play blues scales… Etc…

It’s very easy to feel overwhelmed by the options of norns. And yes, many videos demonstrate the ambient side of it, however, there are a lot of scripts that can be used for all kinds of genres. Take Supertonic, for example - it generates interesting rhythms from already existing ones. Or Hopscotch, which generates MIDI rhythms from single notes you input (via MIDI as well). My suggestion is, have a look at the list of scripts, pick 2 or 3 that seem like they could be useful to a degree to you, and go from there

I think there’s also something to be said about the typical ways many people use the Norns, which tends to favour “ambient”.

Norns is, inherently, a tool with a fair amount of menu-diving (imo) and there’s a huge amount under the hood on most scripts even if a lot os exposed in the interface and on the grid. It rewards getting into the detail (in a way that other menu based machines don’t, IMO). The grid can help to counteract that, but again, it’s form (with no labelling or or variation in button -type/size/colour etc) rewards a slightly slower interaction with a learning curve - kind of nudging stuff along, rather than dramatic shifts in tone. Machines with a more obvious “knob per function” (and utilise physically different knobs/sliders/pads etc) tend to allow a more developed muscle memory perhaps? MPC is the obvious example I’m on drawing on here.

Of course, it can do other stuff and there are scripts and users that encourage it and demonstrate it, but I do think the more popular scripts and interface itself work very well for music that moves at a slower pace.
That’s my experience at least, but think there are great examples that counteract that impression as well.

here’s a non-ambient “demo” (which later ended up on a vinyl comp by Detroit Underground, so i guess sometimes demo just means music?) from eleven years ago… it’s max/msp plus a softsynth, but it represents exactly the approach possible with norns— little weird sequencers. i could make this exact sort of music now easily with norns— just back then i was more into this autechre-ish sort of thing (i still like it, though… that tonal shift around 1:30 is quite nice i think)

Sounds great, not too familiar with your back catalog but would love to hear you make more music like this !!

It’s interesting to me that the community seems to bias towards ambient. I suppose it’s likely self fulfilling, script demos or youtube videos might launch newcomers-or-old hands on a trajectory in terms of how a script can be used. Maybe reversing that trend away from ambient should present as a challenge rather than a problem (if it’s even a problem)… another way to contribute to the endless conversation / feedback loops.

I am delighted by this (sudden, and welcome) “is BWV 1007–1012 demo for cello”, “what genre does a delay pedal make” &c turn of this discussion. Is human voice a demo for Reneissance basilica architecture? Flipping an idea on its head and running with it.

Hello beautiful community. I purchased a Stock Norns secondhand and was told that it’s not coming with the original power supply and cable. I know the Shield is very specific about the power it prefers. With that said, what would be a good replacement?

Thank you so much and sorry if this has been answered previously. <3

If you have one around the house, an iPad charger works great

It just so happens I have one of those in arm’s reach. Thank you.

I’m not certain the proper Norns is as susceptible to power supplies variations but here’s what’s mentioned in the doc page for the Shield :

And the charger for the Norns is this one so unsurprisingly similar specs:

The charger that comes with norns is GEO151UB-6020 and its power specs are 2A / 5.25V. A direct replacement can be purchased from Adafruit.

My current dream - get the factory Norns (early 2022 can’t come soon enough!), take my OP-1 and the Norns out to nature with just those two, with a short cable from OP-1 directly into Norns and then out to headphones, and just invent.

Is this an appropriate thread to ask for script recommendations?

I’m hoping to find a script where I can sample in, pitch the samples across say a grid (cc2), multiple instances would be lovely, then have envelopes or the samples. Cc2 with envelopes really. If that’s perhaps too ambitious, just one instance mapped across a ‘keyboard’ or other monome grid interface would be lovely, ala op1. I’ve used mx samples which is fabulous but would love to be able to sample in.

Timber perhaps? I don’t think it has a built-in super-quick “sample audio input and map it across a keyboard” workflow but you could get pretty close by using TAPE to record audio input, then loading your recording into Timber Keys.

I shall explore timber