Arc apps: do they work?

I’ve just dusted my Arc 4 off after a long hiatus, and am trying to get some of stretta’s apps up and running for it. Unfortunately, Max doesn’t seem to want to say hello to the Arc.

I’m trying things out with Max 5.1.9 runtime (build 48561) and no idea what version of Serialoscd, since serialoscd --version doesn’t do anything… The date from ls -la is September 26, 2012, but I’m not sure if that means anything.

So… has anyone gotten things up and running recently?

Errors in the max window: 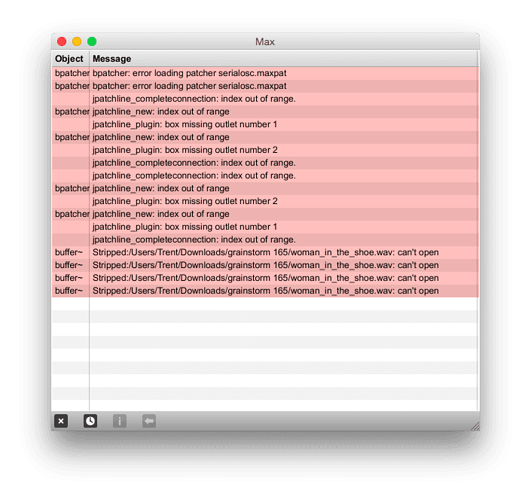 Maybe I’m missing an external, or need a newer version of Max?

U are missing the serialosc.maxpat .
Check if you have it in your max runtime folder.
Btw: grainstorm !!!

Weird… where do I even get that anymore? It doesn’t appear to be in any of the arc or grid repos… Maybe I missed something in the installer?

It’s not included in the installer as serialosc.maxpat is now a part of the official Max 7 distribution. We’ve found Max 7 to be incredibly solid and highly refined making patching much faster. Additionally it’s nice that the old ‘Runtime’ method has been replaced with a single fully-featured application.

The easiest approach is to download the full .zip and then drag the resulting folder inside of your Max 5 folder (where doesn’t matter).