Hello all. It has been a very long time! I was somewhat involved in the forums a long while ago (around 2008/2009, if memory serves me correctly), but went on an eight year hiatus! During that time, I have maintained an interest in electronic music and interesting controllers like the monome/arduinome, but due to commitments and hectic schedules, I’ve fallen off the map a bit.

I was cleaning my music room (I’m also a drummer who dabbles in guitar and bass), and came across my arduinome and a second partially built arduinome. They were a bit (read: very) dusty, and I began to ponder the possibility of resurrecting these aged titans! Well…resurrecting one aged titan, and completing the other!

After a quick dusting, I’ve begun an attempt to finish the second arduinome I started building so many years ago. I should hopefully finish the wiring in the next few days. The hardware construction is ironically the thing I’m less worried about… It is the software implementation/interfacing that I’m a bit nervous about!

I figured I’d detail my attempts at getting these two bygone beasts working again…complete with pictures!

I know that I’m going to need some help along the way, so I’m sure I’m going to be asking questions to the community during the process. I’m not sure if anybody will be able to offer any assistance, though! It seems the arduinome variants have basically gone the way of the dodo as the popularity of pad-based controllers increased, and cheaper alternatives emerged.

I’ll snap a few pictures of my current progress this evening. In preparation for starting the software flashing, I have downloaded the applications/drivers detailed on the original Flipmu.com site (http://flipmu.com/work/arduinome/instructions/duemilanove-ftdi-based-arduino/). I will also need to download the ardruinome firmware, and arduinomeserial.

I’d love to get these working again. I was also browsing some of the software on the docs page of monome.org and saw some interesting new software packages. I am particularly interested in sum, which seems to compile all of the apps I remember playing around with all those years ago. I wonder if they will be compatible with the arduinomes? Maybe I’ll just have to use older versions of the individual programs. Jumping into the abyss here! Fingers crossed!

honestly it’s not well supported as the arduinome-building community has moved on to other things-- and the new var-bright grids have gotten a foothold in app development. you’ll be able to use all of the old apps still, they’re on github: https://github.com/monome-community

and finally, i must convey that the grid kit at $480 gets you a really well-built machine that maximizes the use of the most recent grid developments: http://market.monome.org/collections/primary/products/grid-kit

Wow, only a few minutes back into the forums and I get a message from the man himself! Thanks very much for your response

. In addition to building the arduinome all those years ago, I also built two of the monome 64 kits. Those were amazingly fun to build! Those two kits went to my electronic music professor (he commissioned me to build them). I remember sitting in a biochemistry study room waiting for the kits to go on sale! That was back in the days when the small batch kits would sell out in less than an hour. Luckily, I was able to nab two ;). Good times. I’d love to build the new grid kit, but just can’t justify the expense right now.

I’m actually totally fine with not being able to get these running with the new apps. If I could just get them up and running with the old apps I loved playing with (mlr etc…), I’d be more than satisfied.

I think the last time that I was messing around with these was way back in Max5 runtime days. If I am trying to resurrect these beasts, do you think I should I use an older Max runtime, or the newest one (Max 7)? I guess I could always experiment. I think the laptop I had back in those days probably still has Max5 runtime on it.

While this thread may not be super helpful to anyone, at least it will serve as a novelty!

And I’ve hit my first snag! I’m trying to upload the latest firmware (arduinome firmware 3.3a). It is compiling fine, but when I try to upload, it errors out with the following message:

This report would have more information with
“Show verbose output during compilation”
enabled in File > Preferences.

I’m a bit confused as to what to do next haha. Anybody have any suggestions?

avrdude: stk500_recv(): programmer is not responding

Doh…I had the wrong Atmega chip selected for my particular board (Atmega 328 vs Atmega 168).

I got arduinomeserial uploaded… next step is to test an application. mlr is the first one to try… I am going to try max7 first, but may have to use one of the older runtimes if that doesn’t work

The good: I successfully uploaded the firmware to the arduino. I plugged the arduinome in, and got the familiar scroll on the keypads!

Snag 2: I have been trying to get an older version of mlr that I got from github to work with the arduinome with no success. Arduinomeserial is open, and recognizes my device. I have set the prefix to “/mlr” but I am not getting any interaction with mlr when I load the Max patch. I can put files into mlr and interact with the program itself, but pressing pads on the arduinome doesn’t seem to be doing anything. I was going to try the old “monome test” program, but can’t seem to find it on Github…

Any suggestions? (when i can, i am going to post the video of the first scroll when plugging in the arduinome. my first victory in the resurrection project!)

Here are the errors that I’m getting from Max5 Runtime 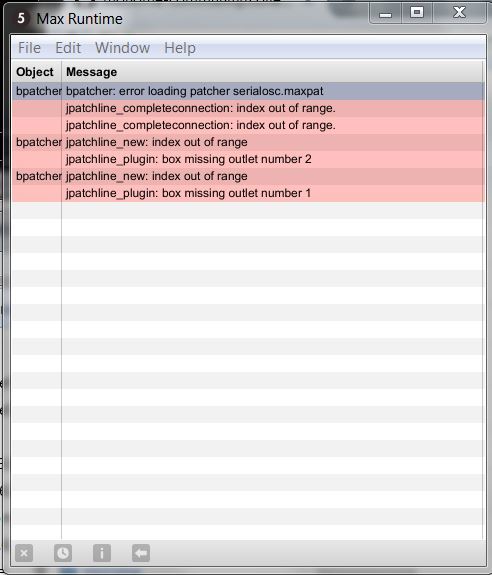 You can find all the apps here:

This is a holding area for monome apps that need testing before movement into their own repository. - monome-community/collected

i downloaded the collected apps zip from github :D. I still can’t seem to get any communication between the monome and the max apps despite the fact that it is recognized in arduinomeserial. (as far as the workflow goes, i open arduinome serial, then max runtime, then a max app. after that i will change my device prefix to the app i’d like to use (/mlr for example). when i am in the app, nothing happens when i press any of the buttons on the arduinome. i can load clips into the app and get the dac and thru to work (i have my computer speakers as output device and computer microphone as input device at the moment), but the arduinome doesn’t seem to be interacting with the max patch…

i’m sure that there is something incredibly stupid that i am missing here… a facepalm-worthy mistake for sure.

i’m definitely open to using serialosc, but have to admit complete ignorance as to how to use it.

i’m reading up on serialosc at the moment. as tehn said, serialosc is supposed to be compatible with the arduinome. maybe that will be an easier path to getting these up and running?

i’ve been searching for a good reference for using serialosc with monome, but i have yet to find a thread/doc that is comprehensive enough for me to understand haha :D. i’d like to think that i’m intelligent enough to get this working, and am just a bit rusty.

thanks for all who have read this thread so far!

I tried to install monome_sum prior. it installs serialosc as part of in the installer. however, it didn’t seem to detect my arduinome…

should i uninstall monome_sum and then try to reinstall serialosc? is there someway of configuring serialosc to detect arduinomes? i see that there are dll files…maybe i need to edit those?

i do apologize for the naivete.

I believe monome_sum installs v1.2 whereas the latest release of serialosc is v1.4. No idea if a newer version will help you or not, I don’t have any experience with arduinome.

thanks jason. i’ll keep that in mind!

i suppose i should mention that i am using windows 7 64 bit.

As I said, I’ve installed monome_sum, which installed serialosc. When I look for the serialosc processes in my task manager, it shows as “stopped” for the status.

However, additionally, I downloaded the serialosc.maxpat and put it and the serialosc.js files in the max 5 folder… I am now not getting any errors in the max runtime window when i attempt to start a new app. i also see a dropdown menu in these apps which i assume is for selecting which monome to use. unfortunately, it doesn’t seem to be detecting my arduinome… i can see the arduino’s activity light turn on when i press buttons, and the lights scroll as they are supposed to when i plug the arduinome in, however…

not sure where to go next, but progress nonetheless…

have you put a serial number on the ftdi chip?

tehn, thanks for the response. i truly appreciate your help even though this isn’t a monome proper.

i should mention that i am working with a arduino duemilanove.

i have put a serial numer on the ftdi chip. a40h-002. it shows up when i open up arduinomeserial as that number.

i have also tested using max7 and am not getting any errors when running monome_test_5. i can see the dropdown to select my grid, but there are no options when clicking the dropdown.

serialosc is still showing as stopped in the task manager as well.