Another new synth! This one is the most interesting to me so far, I have a soft spot for wavetables through analogue filters and this seems to fit the bill perfectly

The video contains some rather overt examples of toxic… whateveritis, so be forewarned it’s rather obnoxious if you’re sensitive to swaggery gangsta-style and connections of mental illness with “insanity” and stuff.

But the synth is a very nice departure from Arturia’s brute series.

Apparently it has a bunch of the WT from Plaits.

I haven’t watched the video (and probably won’t as it sounds pretty awful), but this looks like a great synth.

Hadn’t seen that, but I suspected it, given the talk of multiple mode oscillators and the labelling on the knobs (and the french connection). “8 modes” makes it sound like more than just the WT.

for anyone considering not watching it: it might be worth it just for the really aggressive touchplate pushing. 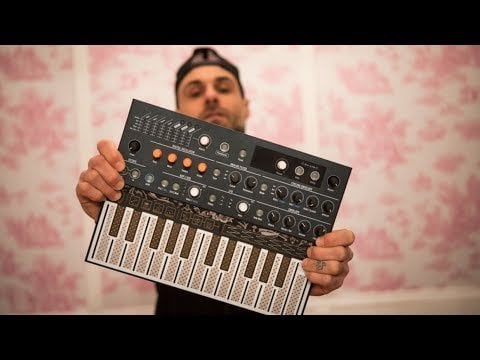 So there wasn’t much colaboration and Emilie is being “paid in PR”.

This is obviously legal but that doesn’t mean I have to like it.

Blergh, “our partners at Mutable Instruments” sounds a lot less one-sided than the reality.

The video is terrible.

The sound is… just not very exciting?

The keyboard is maybe kind of neat.

Their failure to actually consult with Emilie about it in a meaningful way, and then claim “collaboration” was both stupid/shortsighted (it could have been a better synth!) and basically just dirty.

I’m hoping for a clarification from both parties since Arturia’s advert’s implications seem illegal in the absence of direct cooperation. If there WAS cooperation or even just “they asked me and I said it’s open source so do as you please” then Émilie should clarify because otherwise I’m right there with you…

Scummy to make a buck off the name.

I think utilizing the Plaits algos would be totally fine if they hadn’t tried to build their brand on it.

EDIT: Further comments make me think there was NO prior communication. What the actual fuck Arturia. Do you want an injunction? This is how you get injunctions.

EDITEDIT: Ok I was wrong:

Yes, I was aware they were working on this. I’ve been invited to a focus-groupish meeting at Arturia, at that point the hardware was more or less frozen and it was pointless to make suggestions. Never had an opportunity to listen to the actual thing and give feedback about the way the code could be used (eg remapping parameters or tuning things differently given their filter).
They did not do anything stealth or sneaky, but I had nothing to say about the product. #notacollab for me.

What’s beyond me is why they couldn’t just go “hey we even added algos from Mutable Instruments because they’re open source and we love what this maker creates”. Wasn’t this just as good on the PR front, not creating false expectations for something new and exciting from MI, and not creating this image of Arturia as the big fish exploiting other smaller manufacturers name? Because let’s be honest this is as beneficial PR for Arturia to be associated to MI if not more, than for MI to be associated to this marketting stunt.

agreed. If you google “korg prologue plaits” there is a lot of info about how a few of the plaits algos were ported using korg’s digital oscillator sdk…none of which is from some sort of press release from korg talking about a “partnership”.

To me it sounds like the invite to a focus session was an excuse to call it a collaboration.

Was just about to purchase a KeyStep for a travel keyboard with MIDI, CV, and USB connectivity, but now I’m uncertain if I want to support Arturia.

Any suggestions for an alternative?

That’s what I had in mind exactly. Also bigger manufacturers benefitting from the “indie” image of smaller brand is a big trend right now, see Roland Se02 with studio electronics, Pioneer adding DSI filters (sesuential is no small maker but compared to pioneer or roland I think they’re pretty boutique), Korg adding sdk to their gear for smaller makers to add features and so on. And I can’t shake that it benefits a lot to the bigger fish. Reminds me of Drake’s strategy of always featuring small upcoming indie rappers on his singles to always qualify as fresh and new and ditching them after that to focus on the next small artist to exploit for branding purposes.

The video is well worth watching, it might actually be a deleted scene from Nathan Barley.

Well, I swore off Blue Lantern for a lot less than what Arturia appears to be doing.

Also, the name… I don’t think I can have that in the same room without negatively impacting my creative process. Call me a snowflake, but small stuff like that matters.