In my dream world I’d drop the long file in a folder and some software would run and deposit the sliced files in a different folder.

I’m on Mac. I have a feeling some combo of Automator and FFMPEG can do this but I’m not sure where to start.

I’ll be doing this with a bunch of files which is why I’m hoping to find an automated way of doing it.

Can anyone here point me in a direction?

If you’re willing to use the command line, sox is a great tool to have for this kind of thing (simple edits, changing sample rate / bit depth, volume boost/cut, etc). This StackOverflow answer looks like pretty much what you want: https://stackoverflow.com/a/33600461/725298

Hi. Could anyone recommend similar tools for Windows? I have a vague idea of automatically pasting together single seconds of random mp3s from a folder, but no idea where to start.

Dude, use my software: Argeïphontes Lyre

Set it for sequence evisceration 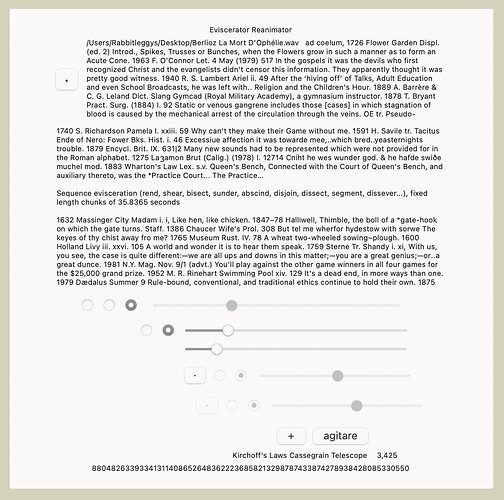 Dude, use my software: Argeïphontes Lyre

Holy shit! I remember using Argeïphontes Lyre back in 2001 or so! It was one of the first music applications I ever used on a computer and it blew my mind. Many fond memories of that time when computer music applications were scarce and arcane and weird. Awesome to see you here!

Hello. For a while I’ve been very interested in the “classic” laptop computer music era, 90s/early 2000s, and the software and techniques used. At the end of last year, I got a link to a Supercollider 2 patch, Bhob Rainey’s Xynthi, made to ‘emulate’ the EMS Synthi. It didn’t run on anything past OSX 10.5 or something, so I had to get an old 2001 Powerbook and install an OSX 10.3.something and the last version of OS9 just for fun. Xynthi is wonderful. Without a doubt worth getting a Powerbook f…

Awesome! Ahhhh the naughties, back when I was young and pretty.

cool, I’ll check out the thread.