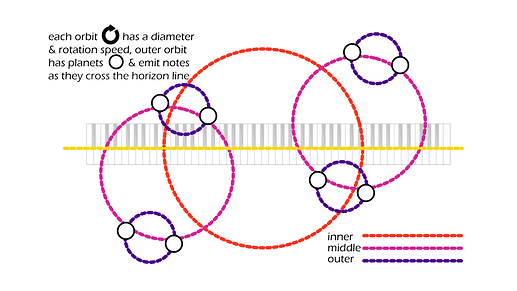 This began as a way to explore quadrature phase & but quickly morphed into a small sequencer, loosely based on barycentric motion of celestial objects. Two bodies orbit a central point & two more bodies orbit those. As the orbits cross the horizon a note is triggered. Patterns emerge and change as orbits are changed.

v0.1.0 added additional orbit. reverted independent speeds (impossible to get back to symmetry), use horizon to introduce assymmetry 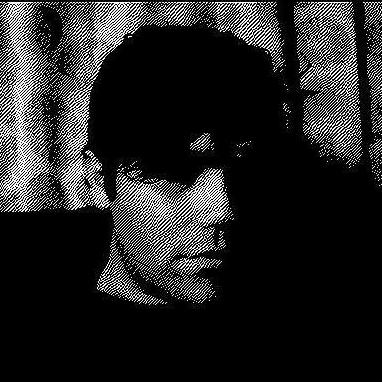 orbiting synth plucks for the monome norns. Contribute to echophon/barycenter development by creating an account on GitHub.

45 Likes
oooooo
Live streaming shows, or, life in the era of the coronavirus
Quintessence
norns: scripting
library + norns package manger + norns.community -- bot to help make sure it's in all the places?
tyleretters September 4, 2020, 11:34pm #2

I’ve been enjoying this a lot over the last few days too - it made a particularly useful into section for an upcoming live set.

appreciate the feedback & any bug reports

midi is closer. need to work out switching between audio/midi and make it a little more stable.

should be able to once their added to the params menu

I’ve been really enjoying barycentre, but after an update to the Norns firmware the notes from barycentre are very much shorter, more staccato. Reading through the Lua script it’s not obvious what to tweak to remedy this… Can you give me a clue?

With the internal synth using PolyPerc, the cutoff & release are tied to the inner & outer orbit size. Try larger orbits for more sustained sounds. You can also tweak these values at Line 262 if you would like.

Thanks so much. I hadn’t spotted the relationships between the parameters there.