Just got this in an email and it looks pretty interesting, particularly as it’s DIY friendly.

On September 16th 2019 we will be launching a Kickstarter campaign for an exciting new family of touch sensors that work with Bela and other maker platforms!

Mark your diaries for September 16th 2019 when we’ll launch our new set of tools which make it easier than ever to integrate touch sensing into your music, art and interactive projects. In the meantime stay tuned for more details.

See you on Kickstarter! <3
The Bela Team

Also from the github it looks like it speaks i2c: 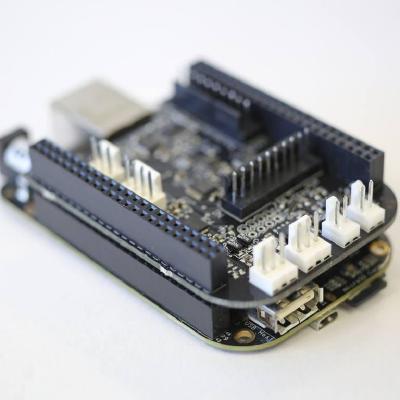 Contribute to BelaPlatform/Trill development by creating an account on GitHub.

They had these ( well I guess the prototypes) at superbooth, they looked really cool interesting and hassle some really nice software integration.
Looking forward to release day

This looks interesting. I wonder what their price-point and sensor mechanism will be. Looks capacitive?

I was just beginning to look for Kaoss Pad-like x-y sensors, and found these folks… $18 USD seems pretty reasonable for the part, though there’s inevitably some HI calibration to get it making sounds. A quick revisiting of their homepage shows a few more interesting bits, as well as quotes from some familiar names… the 2D potentiometers seem especially interesting too…

Is Trill supposed to be a software/hardware combo? Or get down to that kind of sensor price point?

The Craft board looks pretty exciting:

Trill places the power of high-resolution capacitive touch sensing in the hands of everyone, making touch sensing easier than ever to integrate into your music, art and interactive projects.

With this kickstarter we are launching three types of sensor:

We will launch the Trill sensors on Kickstarter with special introductory pricing and discounts for bulk purchases including not-to-miss prices on Bela+Trill experimenter kits.

Keep an eye out for the launch at 10am (UK time) September 16th 2019 and be the first to get some of our limited early bird rewards.

See you on Kickstarter! <3
The Bela Team

As a Non-Maker, I hope there are finished products on offer from this KS…

Ooooh, yeah, Trill Craft with guitar frets, would definitely be an interesting party 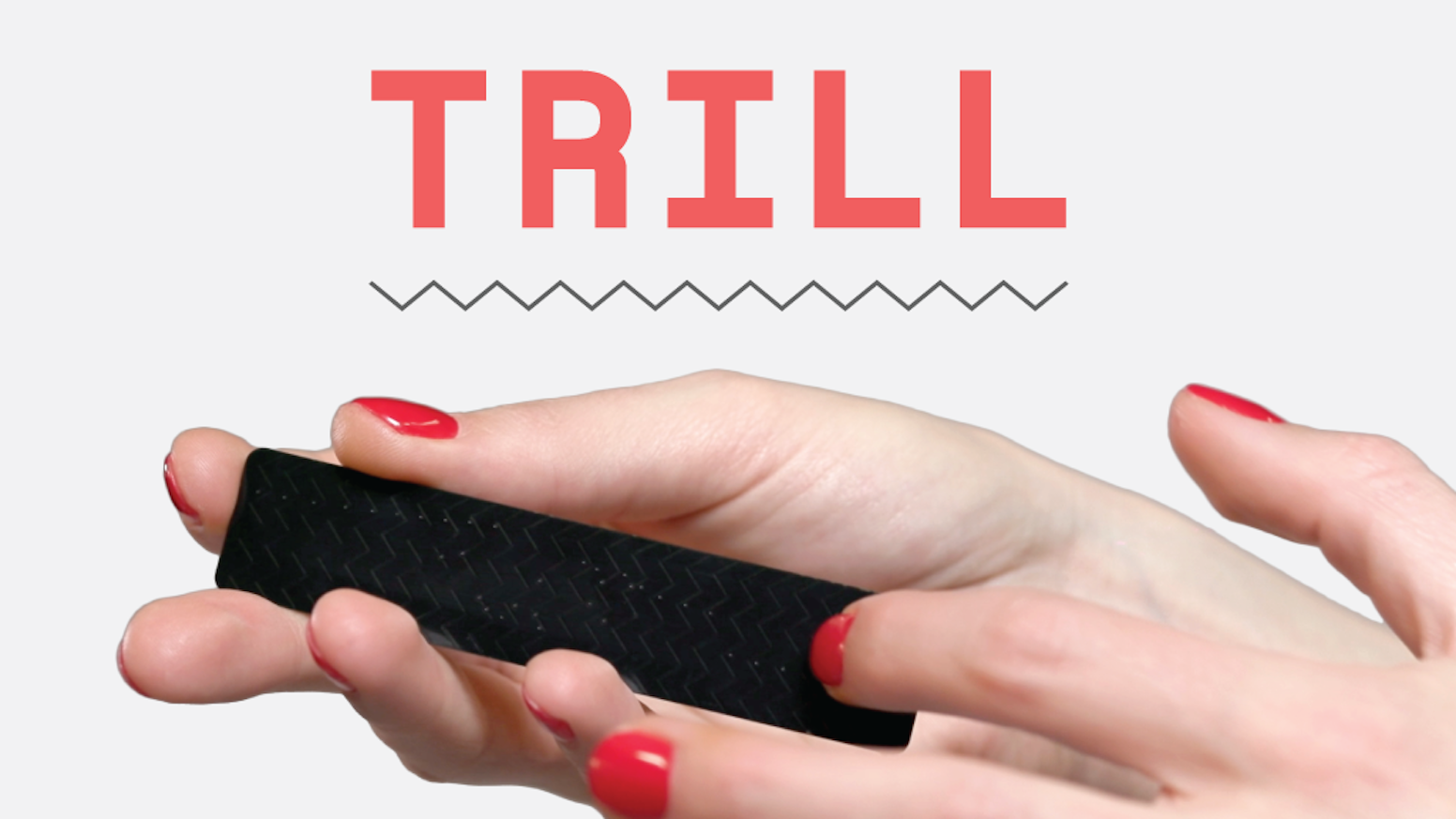 been waiting to back these ever since i saw them at superbooth!

one exciting part of this is…
Bela Pepper DIY Eurorack module, has an I2C connector on the PCB, so you can connect TRILL directly to pepper for touch sensors in your eurorack.

@micromegas yeh, you reached your goal in 2 hours - well done.

~£14 each is a reasonable price point IMO… The skepticism of my previous comment is sufficiently diffused.

I backed the experimenter kit as I don’t have a bela at all (yet), so nice to get that along with it, plus pledged for 3 extra trills.

Still torn on which ones I’ll with in the end, but leaning towards 2xcraft, and then 3x each for bar/square.

I love the fact that you can cut them down too, super amazing/useful.

In addition to other experiment stuff I might try to merge an idea I had for a capacitive controller with my more newschool “mounted on the snare” controller vibe: 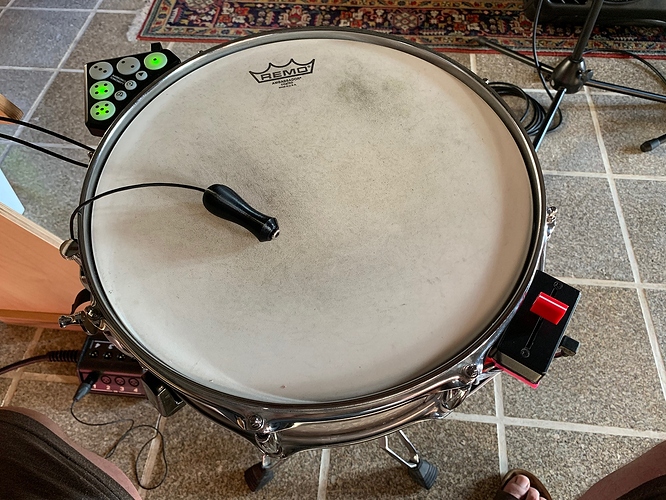 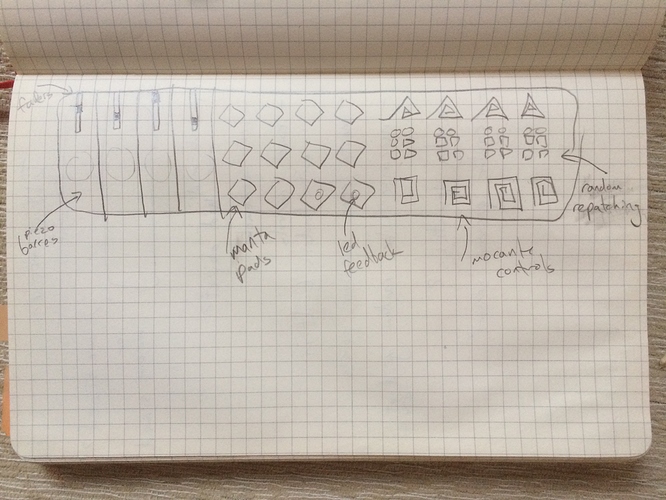 Still torn on which ones I’ll with in the end, but leaning towards 2xcraft, and then 3x each for bar/square.

yeah, thats the question isn’t it…

Ive backed an experimenter kit too, as my other belas are now all in use…
(bela max + pepper -> eurorack, bela mini -> AE modular rack)

quite looking forward to adding these into a modular context (both AE and Eurorack), always nice to add more human contact there - though I might team them up with teensy or arduino for that as they use less power than bela mini.
I also like the idea of building a standalone instrument using them … which is probably what I’ll use the mini for.

good thing about KS is you can alter you pledge right up to end date, so I might add a few sensors/crafts to the pledge - once I decide on which projects Im going to do.

Do Bela work well with Max? 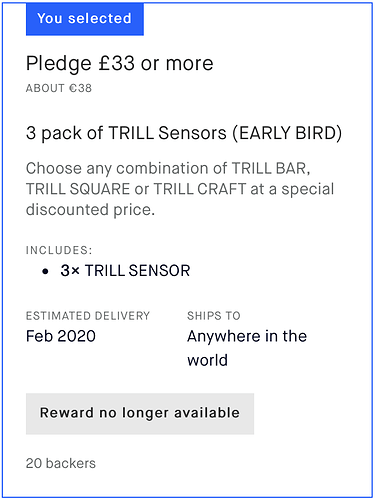 Do Bela work well with Max?

Bela is arm based, so cannot run Max.

but it can run Pure Data patches (or C++,CSound,Supercollider)

if you have to use Max, then you could get the trill sensor data on Bela, then send it via OSC to your computer and process there in Max.

However, the Trill sensors connect over USB to a computer, so they could work with Max and OSC, yes?

(not sure if that original poster meant to Bela as the platform, or the specific Bela Trill devices.)

No , trill are not usb they use i2c
So you need to use something with i2c eg Bela, Arduino, rPI, teensy etc. as a bridge to max.

Oops - sorry! I got confused.

But it would be fairly straightforward to use a Teensy (as one example) to bridge the Trill i2c to OSC or MIDI and then pass that to Max.