eblomquist, do you mean this? 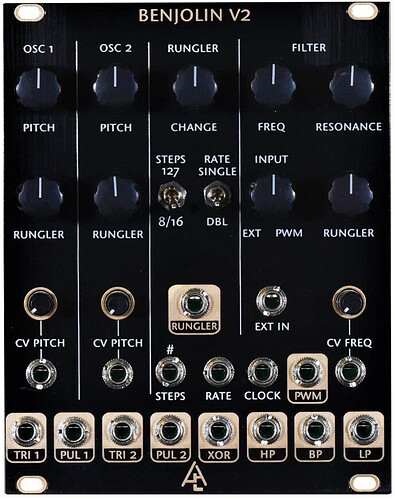 I’m loving mine. Part of the fun I have is exploring things slowly. I’ll get it patched up and out and then isolate an out and make really fine adjustments. This method produces movement and sound that is not chaotic.

Playing with the filter is particularly fun. I’ll run a triangle out from one of the oscillators in to the Ext In jack and just listen to the LP out of the filter (my fave) while I play with cutoff/res/pwm.

I did get the Turing Machine expanders from ALA and so far Enigma is pretty fun to tweak running into my Twin Peak—I can create the sound of rushing/pouring water. Hahaha

I have it. The audio range seems larger. The filter is a little different. This means that in normal operation mode, i find it a little less liquid since the resonance is a little tamer. But you can patch the BP out to the filter input for more resonance (sine wave is possible - even as a waveshaped version). So this gets you back to the old behavior.

The external clock is a nice addition and the different DAC/Rungler patterns are great.

It’s different - but so far I’m happy with it

I added V2 several days ago. V1 resides a couple of rows above it.

First thing I checked out was the level of the filter outputs. Nicely robust! (Some sort of trade off with resonance welly?)

Then on to EXT IN, another of the V2 features that lured me to purchase. Apparently, the INPUT knob, rather than affecting external signal level, adds internal PWM to the filter. OK with that. Has anyone noticed anything else?

More to explore, but I had to do something with V2. So, messing about with V2 and injected V1 became the genesis of Vin Français. The track eventually became a showcase for Mysteron, with the BJs forming a chaotic bed.

I posted the link to Vin Français in a Make Noise thread. At the risk of committing a board faux pas, here it is again. It’s mix #3, so that’s something.

Yes I do indeed.

A Benjolin has seemed like unobtanium, and yet here’s a lovely looking new version with a reasonable price and fully eurorack optimized!!!

I think it’s right up my west coast alley

how do y’all feel about epoch vs the diy kweiwen version? also, does anyone know how to add a filter input to the epoch version?

I’m stumped on something. The AfterLater Benjolin v2 is said to work with their Turing Machine expander modules, Enigma and Morcom (the names alone are worth the price of admission)…

I can’t seem to figure out if these expanders are passive or powered. ModularGrid is drawing a blank… They both say "The module comes with the required cable to connect to the main module. " Does that imply that they get their power from the Benjolin?

I’ve written to AfterLater but not heard back yet, and am getting twitchy to know…

Could someone with the After Later expanders for the V2 please explain what they actually do?

I’m not sure what they do in context of a Benjolin (ie. do they tap into Rungler or something else?) but for Turing Machine which they were originally designed for, you’ll find information in eg. Music Thing’s pages.

Thanks. If the functionality is similar with the Benjolin, I can get a sense of what the expanders will provide. Sounds like a relatively reasonable cost/benefit ratio.

I’m guessing one may be direct outs for the different stages of the shift register?

Could be interesting for sequencing if so…

Basically, with Volts/Enigma you get another sequence clocked to the same tempo, based on the input from the main module and how the pots are set. With Pulses/Morcom you get a number of parallel semi-random pulse sequences related, assumingly, to whatever gets fed to Rungler. It’s probably easier to figure out what they do just by trying it out. With Turing Machine they were a lot of fun in a small space, I’d assume with Benjolin as well.

(You asked about the passive vs. powered earlier - in case AfterLater didn’t reply yet, they do require a small amount of power… but at least in the case Turing Machine, that power gets fed from the main module and not directly from the power bus. So all you need is a connecting cable to the main module. I assume it’s the same with the Benjolin.)

That much I have heard back from ALA, no power from the rails but a small amount from the main module.

I’m starting to grok the expanders, thanks to everyone for the insights!

Hi! I was spec-ing this out this evening but I’m having a real time finding the Panasonic A size electrolytic caps. Any source?

I’ve bought them from mouser and rs in the past… not bought any in a while though… I ought to change the footprint to B or C as well as make a few other changes I’ve been planning… not sure when I’ll get around to it hough!

Thanks for the reply!

I love the Kweiwen version, sounds more organic to me than the epoch (also louder output which is welcome). curious regarding the Afterlife V2 though as to how they implemented the connectors for the Turing expanders, is it something that can be retrofitted to other Benjolins like the Kweiwen?

I recently got this one, basically a double benjolin under a single panel
High level audio output and doubles as stereo filter too
Made by Jolin Lab 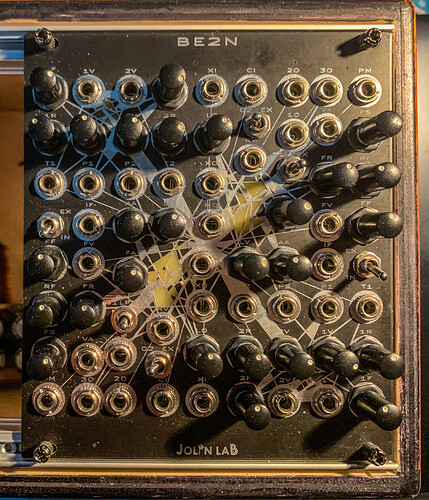 This panel makes my brain hurt. Is it easy enough to use?

Easy enough if you have small fingers, I use finger tips