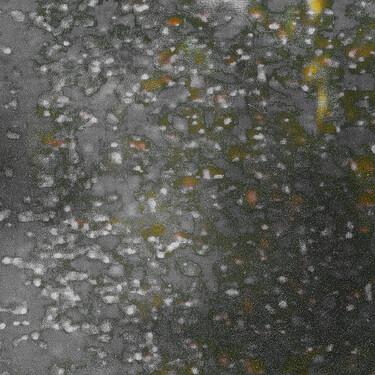 Kaislikossa luita (roughly translates as ”bones amongst the rushes”) is the first set of improvised songs and motifs that I created with a travel setup between Thursday 29 April – Wednesday 5 May in 2021.

I made this album during my stay at my late father’s house in northern Finland. I spent eight days there, arranging his belongings, going through thousands of books, photos and memorabilia gathered during his 85 years. On my day of arrival I laid my instruments on his work desk and would occasionally sit down to play and clear my head to process things. This method and location proved to be extremely fruitful, with 30+ different pieces recorded during my stay.

From the view by the desk I could see a collapsed reindeer pen (reindeers were slaughtered ten years ago after runaway dogs got into the pen and mauled the tiny herd), a nili (a sort of pillar granary used in old times to store food away from animals) peaking from a pile of snow as well as a cottage for banishing evil spirits. The cottage especially has always been hugely inspirational to me, as it’s a calming and mesmerising space, with animal skulls dangling from the roof pillars and a fireplace situated in the middle. It looks like this from the outside: 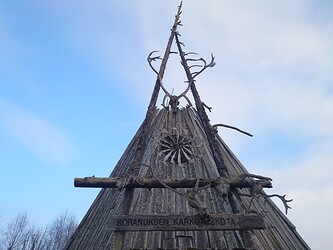 The titles of songs are derived from western Laplandish dialects (”kahilisko”, ”luukori”), northern mythologies (”maan aliset”) as well as my father’s literary and life work.

These pieces were improvised with quite minimal preparation done, then recorded directly to Zoom. They’re pretty much left ”as is”, except for some post-work with EQ and compression. Power went out three times during one day – which has never happened before – so three pieces were abruptly cut in the middle and Monome Norns was powered from laptop (mistake) which unfortunately provided some audible hiss to some of the songs.

With me I brought Arturia Microfreak (freshly bought on the way up north), eurorack case in which Assimil8or, QPAS and Morphagene played the largest part and Monome Norns (using Otis, Cheat Codes, Twine and Oooooo). Additionally I used my father’s old cassette recorder for some source material.

The album is dedicated to my father and I want to thank this wonderful community for endless inspiration and interesting discussions, plus extra thanks to @Justmat, @infinitedigits @dan_derks and @cfd90 for creating the brilliant tools that were used in the process here.

Here’s some Bandcamp DL codes if you’re interested, you can redeem them here.

Thanks for telling about your process and inspiration, listening now…

I used the first code (ydn5-gdpg).

Thank you for sharing the background to the making of Kaislikossa luita. I know it’s a bit of a cliché that good things can come from the darkest places but it sounds as though your time at your Father’s place was cathartic and brought about something good.

Like many people, here and around the world, the pandemic has hit us hard, often in unexpected ways. I am glad you have been able to take solace in music while also sending my condolences on your loss.

An excellent listen; thank you for sharing.
I redeemed tgfz-ejd4 (3rd code).

Fantastic little sketches, really captivating and enjoyable. And thanks for the write up. I love hearing the background of things people have made.

I used this code, thanks:

Thank you for sharing codes. I used this one:

Thank you for sharing these songs with us and providing some very personal details on the process for you. I’m very sorry to hear about your loss.

This looks fascinating, I can’t wait to listen!

Thanks so much for sharing!!!

I took code 585j-b3zl. Thank you for your generosity!

Thanks all so much for your positive responses!

I’ve been working for a 1+ year now on my next “proper” album release, so it feels quite refreshing to put out something out without needing to overthink the material and work on all the less fun aspects (especially promotion).

Also, I edited the used DL codes and added a few more there

I love it! Such great textures- I redeemed code qldk-humf.

Thanks so much for putting it out there/on here! You inspire me to also compile a mini-album with material without too much overthinking. Thanks for that!

Thanks very much for sharing this with us – the music as well as its background. I redeemed the code quoted. I can’t wait to listen properly later today.

Redeemed this code as well. For me the noise and lack of “polish” in the production evoke the rugged norhern Finnish nature extremely well. Thank you for the insipiring music!

Today I made an accompanying video for the opening track, Maan aliset: 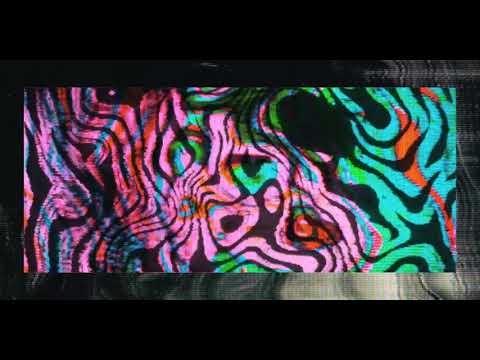