i’m excited to share with you all a very dear project i’ve been working on for quite some time now. it’s a collaboration with one of my best pals, rob wilson. he’s an illustrator, painter, analog light show maker, fort builder and poet.

when kaitlyn and i started our imprint Touchtheplants we knew that one of our early projects would be a collaboration with rob so that we could try and share his art with a wider audience. so we recorded him reading all his poems, and i set to work composing an ambient score to try and build a little meditative ecosystem around his musings.

in addition to the usual digital formats, we are offering the album in a limited run box set book+cassette tape combo. the book is filled to the brim with poems and drawings and ends with a special graphic adventure comic about how we can become something new. 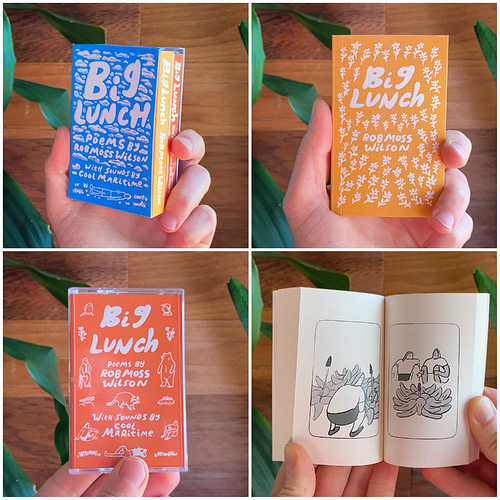 you can read a nice deep writeup on the project and consider a pre-order here:

Visual artist Rob Moss Wilson reads his poems for us, while accompanied by an original soundtrack from electronic musician Cool Maritime.   A union of spoken-word and ambient soundscapes that weds Cool Maritime’s bubbly,...

here’s a stream of one of the tracks:

we’ll be shipping out orders just before the album gets released worldwide - may 8th.

the handdrawn type and clouds are absolutely perfect

Yeah I’d love to have a rob handwriting font set

Heh, I didn’t expect multiple poems in the one track! It’s fun!

“I am captivated by the dog shitting on its own leash”

And I’d second how beautiful the thing looks!

If I remember correctly, when y’all first announced touch the plants, y’all mentioned a bunch of artists you were planning on working with…followed those people on instagram, so I’ve been seeing Rob’s work periodically over the last little bit. He has such a peaceful, relaxing style. I especially love his clouds, they are so pretty! Very excited for this set!