Just when I thought norns couldn’t be more awesome, this comes along…Holy crap.

PR for renaming (and a bugfix) sent!

Merged! Will be updated on the main server shortly. Feel free (anyone) to shoot some PRs

Just had a chance to try this out… so cool! Very simple to set up, though I made the mistake of skimming over a question in maiden as icecast was installing, and answering yes about configuring manually instead of using the config file… which lead to having to remove icecast and broadcast, then reinstall. The second time, it worked perfectly!

This script is a really cool idea and I’ll be checking it out soon.

Some years ago I started a very simple internet radio station called ‘Transmission Delay’, where every day I’d create a new ambient loop in SunVox and transmit it endlessly on an old laptop until the next day when I’d start the next one. There was also some daft idea where I was pretending I was a lonely broken satellite in orbit, recording bits of sound from Earth and playing them back as loops. er, yep…

The trouble was that I didn’t actually go down the route of having servers or whatever, I subscribed to some service that did all that for me, but the more listeners I got, the more expensive it got and the apparently I was supposed to use advertising to make it pay for itself and I didn’t want to go down that route, so it all sort of shambled to a stop.

Anyway, Broadcast looks cool and I’ll check it out!

There was also some daft idea where I was pretending I was a lonely broken satellite in orbit, recording bits of sound from Earth and playing them back as loops. er, yep…

Thanks! Thinking about it again earlier made me wonder if my transmission delay website might be still visible on the wayback machine, but there’s very little there now: https://web.archive.org/web/20160110015235/http://transmissiondelay.co.uk/
It would be good to do something like this again one day.

I have thought about livestreaming my musicking quite often. The problem was, I didnt want to promote it in a way that people would expect something and maybe I would feel stressed about but also - whats the point in streaming something if no one knows about it? I never found a solution for that but this might be it

I will try to make it work on a raspberry pi I also use to record and play with pure data.

Edit: It works! I connect to icecast with [unauthorized/mp3cast~] and started the curl command from inside pure data using [ggee/shell]. If someone sees something like RGKies_2022_1_28_21_17.mp3 thats me

Hey @infinitedigits i was thoroughly enjoying your recent album on Bandcamp, and I noticed in the notes you mentioned sequencing with oooo\acrostic on norns. Is acrostic still available or as a combo app? I couldn’t see it anywhere. Super interesting to read about your technique with the Strega, again sounds fantastic!

https://github.com/schollz/acrostic ? Not sure if this is what @infinitedigits would recommend, but found it on GH.

Not sure if this is what @infinitedigits would recommend, but found it on GH.

that is indeed the respository. but I would recommend against using it.

currently, acrostic requires rebuilding norns using a patch I wrote for softcut. unfortunately my patch has a bug which I can’t quite nail down. this is why it hasn’t been merged into the main norns. so I wouldn’t recommend using acrostic until the bug is nailed down and a release comes out with the patch. otherwise there is a big risk that installing acrostic can cause problems - case in point:

so unless you know exactly what you are doing, please avoid acrostic for the time being

(also maybe all this discussion can be moved to Norns: ideas ? or just PM me for more about this

this is 100% cosmetic update. you don’t need to update actually. the server is now sitting at a new place but the old domain name (broadcast.norns.online) will still work just fine.

the other new thing is the server looks different. there is a tab for live streams and a tab for archived streams. if you goto the live tab and click on a live source it will now bring you to a special page with a transient chatroom.

Hey thats a great update! Was it at all possible on windows before? I just gave the Windows version a try, using VB-Audio VoiceMeeter I could stream audio from my computer not only from the inputs.
I really like the added chat too, does it get archived too?

Was it at all possible on windows before?

in theory yes! the same process applies - ffmpeg output into a curl pipe. but curl and piping is weird on Windows. I found it a lot easier to just use a few lines of Go code to do the exact same thing. also this way I can bundle the right binaries into the program so you don’t have to download ffmpeg separately.

I really like the added chat too, does it get archived too?

not yet, but I was planning on adding it to the id3 tag of the mp3 so it gets archived inside the audio file. the chat seems nice but I don’t want to err into another Twitch/Youtube/Zoom/Discord/Meta thingy so I’ll probably stop there in terms of social interaction.

@infinitedigits, thank you so much for this update!

THANK YOU SO MUCH! I tried (unsuccessfully) to implement the previous broadcast version on an older Mac OS but couldn’t get FFMPEG installed. I see the Mac version doesn’t require it so hopefully this will do the trick =)

well it doesn’t require ffmpeg because I bundled the Mac (and Windows) binary with a version of ffmpeg…that’s why the binaries are ~90 MB (ffmpeg alone is like 80MB !). but like you I had trouble installing ffmpeg on Mac so this bundling solution “just works” though it costs more disk space than I’d like. in the future I’ll push towards a leaner solution.

Sounds good - hope to try it out here soon!

UPDATE: I tried it and no sound output when going live.

@infinitedigits Hey hey, I tried giving the Mac standalone version a spin on my Mac (Mojave 10.14). It appears everything is spinning up but when I try to listen to the stream from another device, no sound is output. I am probably missing something super obvious (I’m spoiled by the Norns broadcast implementation =P ). Here’s what I set up. Just playing back a Logic Pro track back through my Audio Interface UMC404HD, which I’ve selected in the set up: 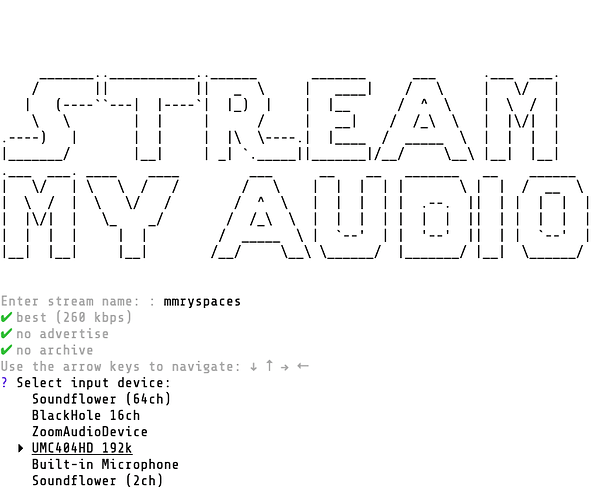 Do I need to configure some sort of Multi-Output device in my Mac’s Audio settings or is just selecting my audio interface sufficient. Thanks!

Do I need to configure some sort of Multi-Output device in my Mac’s Audio settings or is just selecting my audio interface sufficient.

it should be able to just utilize your device? I’m not totally sure though - Mac Audio is unknown to me mostly. Its possible you might need to setup a virtual device? does it work with the “Built-in Microphone”? thats what I tested on a friend’s mac and it worked fine. but I haven’t tested against any interfaces on macs.

I had success with Blackhole 16 channel. I created a multi-out device so I could hear the output of my audio interface as well, which I couldn’t get to broadcast on its own. My streams are very glitchy even on lower quality settings, not sure if its my internet or Mac. I have a new M1 Mac mini.