Building a USB switch for teletype, ansible and grid

I’ve been wondering about a DIY project to build a USB switching box that would work for people who have teletype, ansible and grid. The idea would be to have a socket accepting external USB power, a socket for the teletype keyboard, a socket for grid, and sockets for ansible and teletype. Then on top would be a big switch that would connect the grid to either ansible or teletype (with the keyboard being disconnected whenever the grid was routed to teletype). Whicher position the switch was in, the power line from the USB power would be routed to the grid, bypassing the need for power from the modular environment. The point would be to allow you to easily use teletype grid ops and ansible at the same time without having to constantly juggle usb cables.

In my head, this all sounds pretty easy (hah!) but I’ve never messed about with USB stuff before and I wondered if any of you have any advice on things to look out for when switching sources like this. Ideally I’d want this to be entirely passive, but I guess if that’s not going to work, there might be some kind of microcontroller-based solution?

(Incidentally, I’ve not really kept track with the various monome-designed USB power and switching solutions, but I think none quite fit this use case with the teletype grid ops. Correct me if I’m wrong though!)

this should work totally passive. you just need a switch with a lot of contacts as each USB connection has two data lines. i think you need a 4PDT? draw a diagram with the switch state and where the connections should go and it’ll look less complicated than you expect. external power is easy to wire in as well. @scanner_darkly might have some opinions on this.

i’m working with somebody on a 2 device to 1 host usb switch which would also provide power (testing a prototype right now, hopefully will be able to announce it soon). i can confirm a passive solution works. for the connections going to the host make sure to include ground.

a 2x2 switch would also be super useful - you could swap arc and grid between 2 ansibles, for instance. i wouldn’t worry about keyboard getting connected to ansible/trilogy, they’ll just ignore it.

Thanks for the confirmation that passive will work! Yes, 2x2 with power isolated from the modules (to avoid any noise issues) is what I’d like to try and figure out… will need to see if I can find a suitably chunky switch!

Thanks so much for doing this – I’d buy one of these switches!

I wonder if this device would work?

The blurb says the power is an optional feature (to provide further usb switch options)- so I’m assuming it’ll operate as a passive switch?

I am excited for these prospects.

I have an annoying issue with the Switch module, where after case power-down, the grid and Arc continue to have their LEDs lit… I need to physically disconnect the controllers for the LEDs to turn off. I can plug them right back in, and they stay off, so it seems like the devices are not recognizing the power down moment somehow? I really don’t understand why this is happening, but it is a totally annoying dynamic.

@laborcamp you could just pull out the power to the switch module? or have the switch power chained to the case power with a strip?

it’s complicated because they’re not actually losing power, but they’re losing data connection. when the firmware was designed this was an impossible situation (ie, you could only pull the cable), so it’s not handled.

it will probably not work as i’m almost certain it’ll enumerate as a USB hub.

Yeah, I was just surprised by this behavior, because I also have one of the off-world adapters, to power a grid externally, and this behaved consistently: with the case power-down the LEDs on the grid would be also turned off.

Weirdly, arc in the same setup as grid above, does not behave the same… arc LEDs stay on when powered externally by off world.

As I changed my setup a bit and added switch, I was fully expecting similar behavior. That is not so, So yes: some power yanking is required. OR additional power strip for switch etc.

Looking for a switch to switch between norns and ansible. Anyone ever come up with a solid solution?

The isms case has a nice USB switch that works well. I’ve been wondering if I could build one with more than two positions/plugs.

Don’t even get me started with the isms case, would love to see a MKii!

I’ve been wondering if I could build one with more than two positions/plugs.

Did you ever figure out how to do this? I’ve wondering myself.

No I didn’t pursue it further. If you figure something out I’d love to se it.

I sat down to think of how to do this using a simple 4p3t switch and it appears to be impossible. However, I’m curious if this guy would work. https://www.showmecables.com/4-way-usb-manual-switch-box/

I have a 2 switch version of this very thing which I have not yet tried, but seems like it should work as it isn’t a hub. I will run a test on it in the next few days and if it works, I think we might indeed have the possibility of up to four way grid sharing.

As well as grid between

Would something like this work? Or is there a danger I’m not aware of when just physically switching the usb connections? Also I guess I don’t know what 4 pole 4 position means because I would have expected fewer pins than 24. 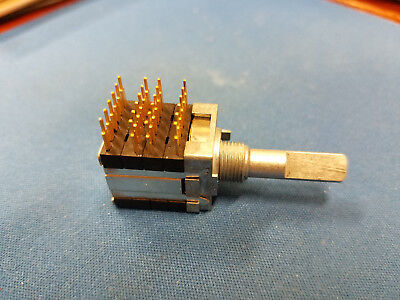 EDIT: @ericmoderbacher actually, I think the rotary switch would work after all. Totally worth exploring.

So I think you want “4 deck” where each deck is one switch that can direct the input to any of the output positions. Maybe 3 deck is fine with a common ground? I don’t know. 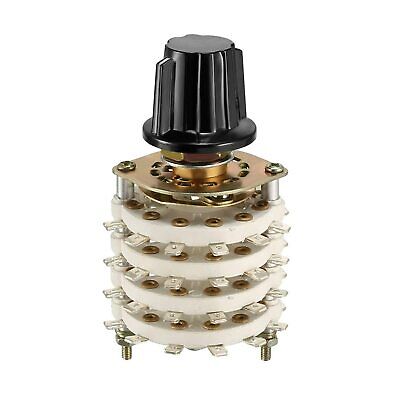