i couldn’t find any notes from installing the header files (to be honest don’t even remember doing that step). but: i can build ansible, and if i remove the folder C:\Program Files (x86)\Atmel\AVR Tools\AVR Toolchain\avr32\include i get a bunch of errors.

i have a feeling maybe your PATH is pointing to wrong header files. can you try executing PATH and see what it returns and then check if you have the include folder under the same parent folder?

I replaced all the older header files with the updated ones and running make again with ansible and teletype, both are able to build the hex file successfully!

One thing that i noticed though, is that the hex files that i have tried building, when compared to the ones ready build from monome github, the size of the hex file seem to differ by couple kb. Not too sure if its any indication of “wrong” build. But i will try flashing the module with my built ones and check if the funtions are working ok after work tonght

i think i have found the way to do the building with no files swapped needed in the toolchain and all the modules firmware should build correctly.

theres were differences in the number of folders and files(between the old and latest toolchain) and certain files which are needed to build the hex file are missing from the latest version of the avr32 toolchain.

some pics to show the differences, left side is the older version toolchain folder and and right is the latest installed version.

3rd pic- comparison of the bin folder which should have a “make.exe” file needed to build the firmware

in short, the older toolchain seem to be working over the latest one, 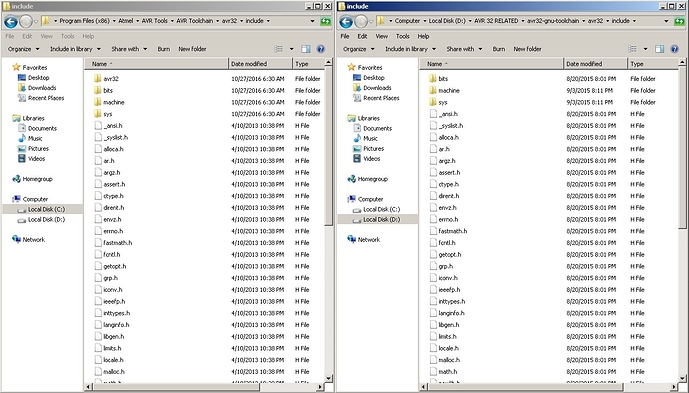 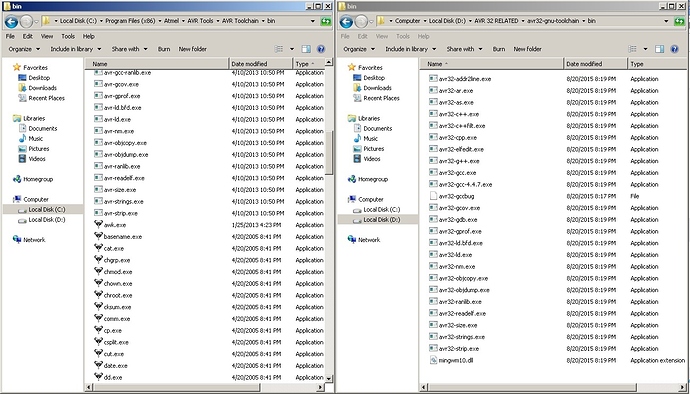 interesting… the version of Atmel AVR GNU Toolchain i have installed on my machine is 3.4.1067 (23bit) and 3.4.1061 (8bit). my folders look slightly different from both of the versions you posted, but i do have avr32 subfolder under avr32\include.

it’s a little worrisome that it didn’t work with the latest version, i’ll see if i can reproduce the issue and find more information about the changes. how did you point it to the previous version, updating PATH? also, where did you find the older version, was it still available from the Atmel site?

good you got it working though! the size difference could be due to the different toolchain version being used and likely shouldn’t cause any issues. i never actually compared the size of my builds vs the official releases.

I found v3.4.2.1573 in a korean forum while googling for older version of the avr toolchain installer.

It seem that the older installer automatically install everything into Atmel folder in program files(x86) wheras the latest installer just prompt where to extract the files to.

Atmel site didnt have any of the older version when i look over there.

I have also tried combining both 8bit and 32bit avr toolchain plus manually putting the header folder with latest atmel version, but it still wont build. Inside git shell, it says there is no make command found.

I updated Path via advance system setting, pointing to the latest version bin folder and the header folder

Another thing is that the latest version when extracted, its in a folder named avr gnu toolchain. The naming is different from the older version. I have tried with folder name changed, updating path, keeping same name, updating path etc to repeat building process. All seem not working.

With the older version, i tried changing the folder name, location of files, updating path etc. Building it all went fine.

So far thats what i have found out.

just posting here as well in case somebody will find this thread - @sam created instructions on how to set up the toolchain on windows using WSL, you can find them in the readme here: https://github.com/monome/libavr32