I’m notoriously bad at cable management but figured recently I should make an attempt with my Eurorack, since by the end of a patch it’s a struggle to reach some of the knobs.

Now that I’m actually in front of it with some cable ties though…I don’t know how to do it? Every audio and CV signal seems to trace its own weird line, getting multed to destinations all across the synth, multiple outputs from one module each going to a different module…

Is there a system to this? Or does this only really apply in situations where you have like 5 outputs from one module all reaching over to modulate 5 inputs on another?

A friend of mine has a simple but seemingly effective approach that you can see in this video - looks like using longer cables than necessary helps bundle them like a mini cable snake, but still lets them split off and go where you need:

One issue I had is that my cables were disorganized before patching, so I ended up grabbing the first one that was just long enough for what I wanted to set up.

One of my local friends showed me this cable stand:
https://www.synthesizers.com/qhl.html

It’s designed for 1/4" cables, but it holds all of my Euro cables just fine. I have them organized by color and length. It made a huge difference for studio cleanliness and workflow.

Another tactic is to keep a clean bottom row (or top row, depending on module orientation) of control modules, including simple items like offset generators. That way, you can keep the focus away from interacting with knobs that are under the cable forest and instead focus on the control surface in front of you.

Finally (and related to the control row), it’s really worth taking some time to take all of the modules out of your system and reorganize them for ergonomics, based on how you use them. For instance, my w/ is on the bottom right of my system, since I’m right handed and my hand rests naturally there. My ER-301 is the bottom left of my system, so that nothing covers the screen or control surface. My generators are all on the top row of my system, as they all have jacks on the bottom (Plaits, Rings, Shapeshifter, etc.), keeping cables away from the controls.

When I’m trying to preserve a specific patch, (which isn’t often, since I don’t have a lot of workspace available at the moment… plus the act of tearing the patch apart and starting anew is oddly therapeutic to me) I tend to manage smaller bundles of cables by individual patches within the system rather than grouping huge bundles of cables together from all over the modular case. Keeping knobs accessible and panel graphics visible is obviously important, so if you have any sort of “set-and-forget”-type modules in your system, maybe route the cable bundles over them to keep other areas clear.

love the idea of using longer cables on purpose …

another element of cable management is tracing back which cable is doing what.
I know of two methods that i sometimes use when it gets a bit more messy and re-patching counts:

cable colour = function (i.e. yellow for gates, green for stepped/quantised voltage, blue for continous volage, red for audio rate sources, …)
cable colour = voice (i.e. if your patch consists of three voices, everything creating and modulating the base gets all yellow, the lead gets all green, the percussion all blue, …)

I had ordered a bunch of velcro strips because I thought I was growing up, but they never arrived, so I decided Fate told me to do it messy. In fact I like it messy.

I think I saw Alessandro Cortini on Youtube explaining that he wraps cables around each other to bundle them.
I tried it with pretty good results

I use Modular Addict braided cables which are stiff enough to stand up a bit, so I don’t have a hanging wad of spaghetti and I find things easier to trace. Sometimes there’s a bit of a forest of cables, but eh, I live with it.

I have mine color coded by length, making unpatching and sorting go extremely quickly and I think it speeds patching a little too. I can see some logic in using colors to identify voices or functions, but in practice, there’s not always a clear separation between voices or functions. I just prefer working this way.

I use a Doepfer A-180-9 Multicore to connect my two cases (on opposite sides of my desk), a couple of Bastl multiples set up as easy access points to my audio interface, and lines to my pedalboard and reverb tanks are semi-permanently-ish routed out of the way.

I use lots of velcro cable ties, it sometimes means changing a few cables for longer ones so that they follow a specific route but it works really well. Really worth while if you’re leaving a system patched for longer than one session.

I use these to great success. they are like giant reusable twist ties.

I’ve got the 6" ones, but the 12" ones might be better depending on how many cables your trying to manage.

even before wrapping cables, some of it is going to come down to module layout: proximity of one module or module type to another may greatly simplify cable length and reduce the intertwining complexity of cross-patching. if you notice that certain modules tend to keep getting patched together, then you might consider a bit of case shuffling to bring them in permanent proximity.

additionally, you might pursue a logical signal flow. example: external input (left of case) through sequencers, sound sources, fx/processing, and then output (right of case) to mixer. this is what my isms case does by default, and it’s what i’ve ended up sticking with; it makes sense. granted, this is only a single 120hp row, not the multi-row or multi-case setup that leads to greater cable density.

i’ve noticed that i’ll typically patch all my ansible outputs into my er-301, so that’s at least 8 cables that can be bundled, and i have a second ansible next to those that i’ve used for a bunch more outputs to the 301. so all three are always grouped together when they’re in the case. and even if those “static” patches don’t get cable-tied, by putting them in immediate proximity to each other, i establish a sort of mental “set and forget” zone, where i can skim over it to other modules and patchpoints that will actually need changing or playing.

but besides keeping module flow as tight and orderly as possible, equally important to me is cable color. i came up with a color system before i even bought my first module, so that i’d have instant visual identification. sky blue for control signals, white for audio signals, including any inputs/outputs to external gear. things can now be wrapped together if desired, as i’ve dedicated “blocks” of the modular for certain shared purposes. it looks something like this, even without ties in the home studio.

I would like to second the “wrapping longer cables around other cables” approach. It works to an extent, but it’s still likely to end up a spaghetti mess.

and I like all of these other ideas, but when it comes to really using my synth, I seem to just start patching with excitement and my color scheme gets crazy and nothing works in the end.

What I really need is to reorganize all my modules, which is easier said than done since I made all of my modules in a nonstandard format 300mm high based on the aluminium plates I could buy at the hardware store. Each panel is an arbitrary width so I can’t really move them between racks. complete lack of foresight on my part.

I’m perhaps the odd person out here, as I use a fixed patch, which I have been exploring since several years, and as I use banana patchcords for control voltages. Banana patchcords can be stacked, but just like with stacking Stackables, the resulting tower is too high for me to get to controls comfortably.

Luckily, there are banana plugs that allow cables to be fed horizontally thru them (you fix the cable with a screw inside the upper black part of the plug), so I use one long cable, remove the isolation in the areas in which it will pass thru plugs, feed it thru the plugs, tighten the screws – and end up with one long cable with multiple plugs on it.

I so wish there was something similar for Eurorack. 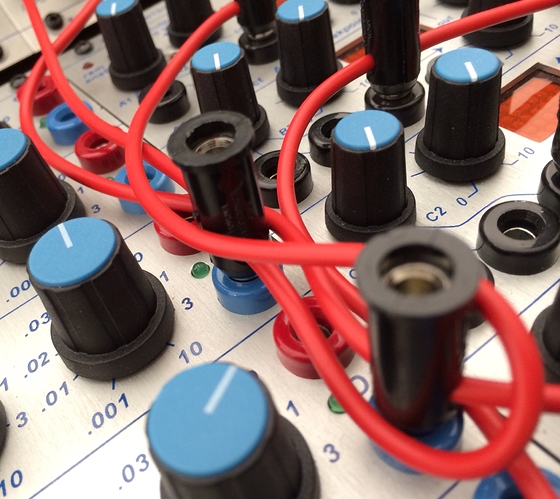 I understand that this works only with a fixed patch, and that the concept of a fixed patch seems to be pretty much the antithesis to how a modular synthesizer should be used. Nevermind, as this system works for me.

When I use a different instrument for free patching, I made sure I got my cables colour-coded by length. Fastet way for patching for me.

I can’t speak to consolidation, but sidestepping the OP’s question a bit a personal revelation was using a single color per part / voice - now I can immediately pull patches or parts I’m done with or that aren’t ‘clicking’. Has helped tremendously with workflow and has had the biggest impact on keeping the process moving forward vs. using color relative to length or signal type. For me, at least.

Whenever I build a patch I’ll be using for a show I bundle all the cables between the two rows of modules and secure them with velcro ties.

Am I the only one that loves the spaghetti?

My cables refuse to be managed, and that’s just the way I like them.

I’ve been thinking about picking up some of these to route signals around my system: