Continuing the discussion from FS (US) hc-tt (sold):

creating a max patch that mimics the hc-tt would definitely be fun.
and it sounds like it could be simple enough for a max newbie like me to get their hands dirty.

Seems like this would make a great Arc/Max patch. Load a sample into a buffer~. Use peek~ to read from the buffer.

It would be relatively easy to make, and using groove~ would make things quite simple as well.

Here’s a bit of a patch I built for something else that lets you essentially ‘scratch’ through a buffer (speed of 0 = stop, speed of 1 = normal playback, speed of -1 = reverse).

So all you’d need is a friction type parameter to slowly reset it back to zero when not being touched, and you’re good to go.

You wouldn’t need control over start/end (unless you specifically wanted to), but taking the tape paradigm, all you have control of is moving the playhead forwards or backwards from where it currently is. So you could have four hc-tts going at once with an arc4.

Unless someone has done it by then, I’ll probably do this as my first arc4 app (when I finally manage to get one), using a bunch of the tape emulation stuff I’ve been building for TPV2.

My original idea for The Chocolate Grinder was to have a CD mode, a tape mode, a vinyl mode etc…, but I only built the CD mode. With what I know how it would be quite easy to make, even with the extra saturation/noise/emulation components.

i like the sound of what you’re describing here, @Rodrigo
will try to spend some time with this on the weekend.
it probably makes sense to build this in stages:

-Friction hasn’t been implemented yet, so knob 1 just kind of sets a playback speed.
-Start/Length precision could be tweaked.
-You need to wiggle the Length knob after loading to get the start/end indicators to appear correctly (and playback to work properly). 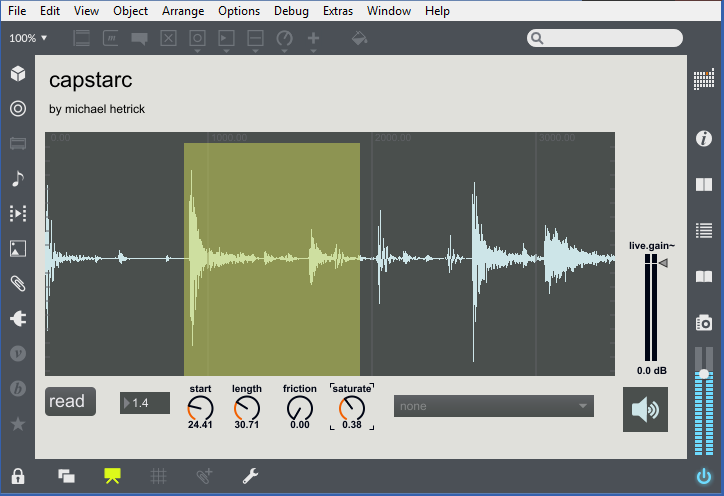 exactly why this place is the best

Thanks! Just pushed an update with extremely rudimentary friction. I don’t have access to my Arc again until late next week, so I haven’t tested how well it works from the controller. The speed box on the interface can be set manually by the mouse. If you set it that way, it ignores friction.

When I get my Arc back, I’ll tweak the start and length reactions to feel nicer. In the meantime, feel free to copy this code for your own projects and/or send in pull requests.

I was thinking about this some on the bikeride to work, so I’ll start putting together something for this as well. I’m mainly picturing something that works along the lines of the hc-tt, so nothing happens when you’re not touching the knobs, so like “tape turntables”. But then also adding control for ramp up/down times, so with that you can ‘spin’ them and leave them going for a bit while they drift down.

And for the LEDs I’m picturing using the little spindle thing from the tag innards (whatever it’s called!) and having that mirror the speed of playback.

Just got my Arc back today. I’m going to sit down tonight and fix the friction behavior. It works fine for a hack, but it could be a whole lot better!

Pushed an update to Github today…
-Friction is improved, but not variable yet. 0 = no friction. >0 = yes friction. I need to improve the function, but it definitely feels a lot nicer.
-Added a “Stretch/Tape” switch. Stretch mode disables pitch changes. Pretty fun, bizarre effect for this performance control set.

New update pushed to Github. I glued the BEAP audio recorder onto the end of the signal path. Ended up spending the last half hour recording awesome loops. 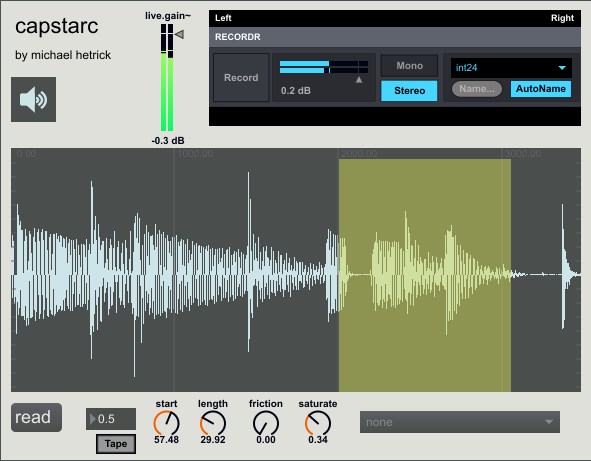 (I want to sit down and have a play with this, but been knee deep in moving house shit which is occupying more time and headspace than I want…)

Any video/audio online to whet appetites?

I’d love to, but I don’t have a good workflow for doing so. It would be cell-phone shaky cam, unfortunately. When I get a chance to finalize the friction behavior, I’ll try to put something together then.

Ok, downloaded it and had a quick play. I’ve made some modifications/tweaks/additions, in a quick/hacky way.

(I wasn’t able to get my old arc to connect on my mac mini, so I’ve not tested it with the arc, or messed with any of the led stuff)

I was sketching some stuff the other day on how to handle the LEDs too, but haven’t figured it out quite yet (basically imitating the tape wheel cogs, and then spinning/interpolating that).

So yeah, have a tinker with this to see what you think.