Quickly summon every combination of 256 eighth notes in a 4/4 bar.

How many times have you sequenced out that classic techno beat? Four to the floor kicks. Syncopated hats. Snares on two and four. What about all those times during writing or live performances where you’d like add some variation that isn’t exactly [random]? You want to control what you’re doing, but need to keep it on the rails. Crucially, you also want to be able to recreate any happy accidents. Well, it turns out there are only 256 combinations of quarter notes in a 4/4 bar so…

With arc Cascades, all of our standard patterns can be broken down into 4 simple integers and controlled with arc. If my math is correct that is 4,294,967,296 combinations of rhythms.

Last year I built an M4L device called Cascade. As soon as I saw what arc could do I knew I wanted to port it over. The visual feedback on arc means you don’t need to look at your computer. 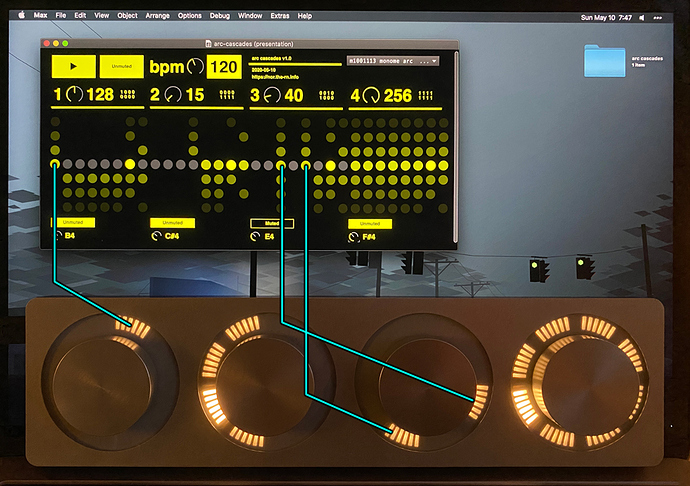 (If you’d like to see any of these implemented let me know and I’ll prioritize them.)

your quick,… a new toy to tryout
comments later

haven’t had a chance to try it yet and also am still relatively recent convert back to using midi for drums instead of audio files, but these four jump out as the most immediately desirable addons. seems somewhat likely that 16th/32nds add too much resolution to be fun? but 16ths at least are very nice to have in your “classic techno beat” use case

Oh yeah, 16th and 32nd notes are going to be fun. Seeing these four features grouped together like this gave me an idea for how to make it work. I KNOW WHAT I’M BUILDING NEXT!

This looks fantastic! Could you also do an arc cascade M4l?

i am back with actual hands on thoughts! obligatory proof:

–second the max for live req–i only have m4l! i was able to get it running by comparing the patch to the original cascade m4l version, but a properly laid out UI and tempo and start/stop messages would be really nice.

–i could not modify note messages in presentation mode at all, though they worked fine in patching mode. not sure if this is a problem with my spaghetti patch, something with the code on your end, or just one of those weird order of operation rules in max that you just kind of have to know about to understand and which i messed up. 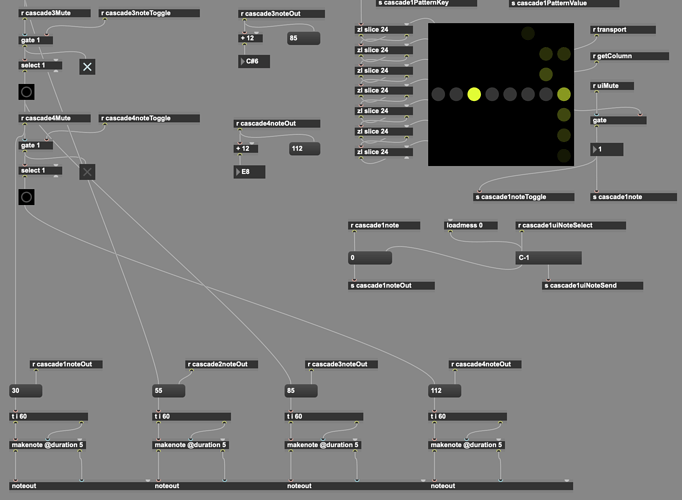 but it’s really fun! even with only a couple minutes experience i was somehow finding close to the patterns i wanted. really weird combination of intent driven and generative performance vibes.

@ypxkap This sounds so cool!! I love the vibe. It makes me so happy you shared. Good job hacking it into M4L.

@ypxkap & @Markus alright that’s two votes for the M4L version. I’ll get that going this week.

@Anfim Thanks for reading.

thanks!! looks great! i just discovered the subreddit /r/drumkits. will make the process of trying to sort through the hundreds of one shots i just downloaded a lot more fun!

FYI, i’m experiencing intermittent weirdness with the midi note selector knobs. like, the note out knob for 4 sometimes controls 1, stuff like that. i rearranged them on my end earlier in the day, but when i opened it up again just now it was back to wrong. but then before my very eyes they started working normally. so maybe it’s just a case of having to turn the knobs themselves before they properly sync up or something? would be great if it could be tighter.

one more request for the M4L version😬, if it could be forced to lock with the playhead in live, that would be pretty nice. a point of reference for this behavior would be the “instant haus” patch that comes with the “max for live essentials” pack from ableton. possible that would involve changing too much from the OG max version, if so, even a dumb “if live is playing, start playing, else stop playing” type thing would be so helpful for recording the output of the midi for further processing.

but awesome job reguardless and can’t wait to see where you take it!

Thanks for the feedback and kind words.

If this even inspires you to make a single new piece of music then mission accomplished.

I’ll look into the Midi note out knob bug. If you have exact steps to reproduce that would be helpful with debugging.

Woah, just cracked open Instant Haus. There is some advanced and beautiful stuff going on in here. (I somehow never installed M4L essentials!) I see the behavior you’re requesting. I’ll get this going, too.

I’ve been tormenting myself refactoring this today. I found a bug that I cannot kill. v1.1 coming soon…

Wow, thank you so much!

Looking forward to playing around with it tomorrow.
When you say grid in the backlog, do mean select a pattern on the arc and then edit it on the grid? Because that would be fantastic, or velocity levels for the steps?

@ypxkap v1.1 is up! I have locked playhead to Live as your requested. I also fixed the knob bug you found.

@Markus You’re welcome! There are so many things we could do with grid. Displaying patterns on grid is a great idea. I was initially thinking having “shift” or “mode” keys on the grid that would change what arc controls. Imagine hitting the “subdivision” key and then you spin arc knobs to subdivide the default 8th notes into smaller and smaller notes. Maybe also moving to other channels (i.e. support more than 4 Midi channels), or shuffle/shift notes forward and backward.

Absolutely loathe 4 on the floor kicks lol but the whole concept and execution here is super smooth.

can’t wait to try it!! while you’re thinking about subdivisions, a thought i had would be as the number of possibilities grow, it might be useful/fun to be able to set a minimum and maximum number of notes. often times i’ll hear some rhythm in my head, know that i hear the snare, say, 3 times in the beat, but not actually have the cognitive ability to input what i’m imagining without a lot of trial and error figuring out the precise duration of the silence between the notes.

That’s an awesome idea. I’ll add it to the backlog.

v2.0 is a complete rewrite. I wanted to release it this weekend but after patching for almost 15 hours a day it still isn’t ready for primetime. Here’s a demo of the alpha. Lots of gross audio artifacts when I ported it over to M4L. It includes many of the requested backlog features (grid, mute tracks, shift patterns forward/backward, bi-directional editing, velocity controls, etc.) and all 2^16 (!) patterns of sixteenth notes. 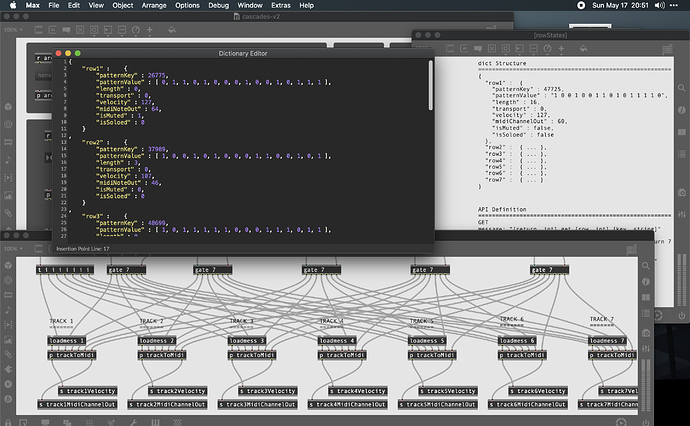 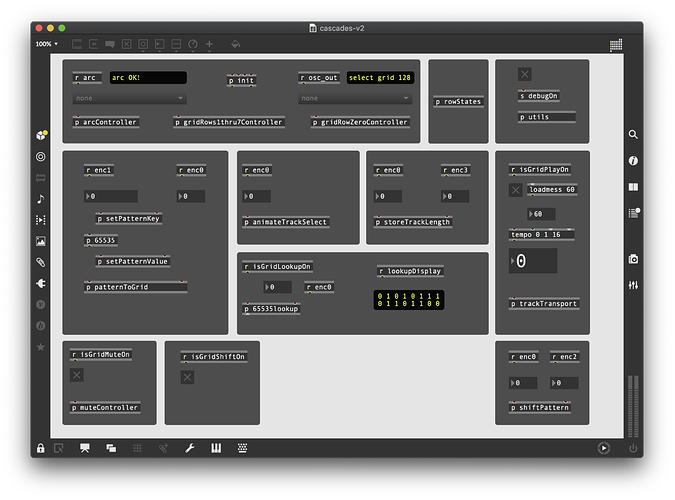 cannot wait to try it out