As seen on IG earlier today… 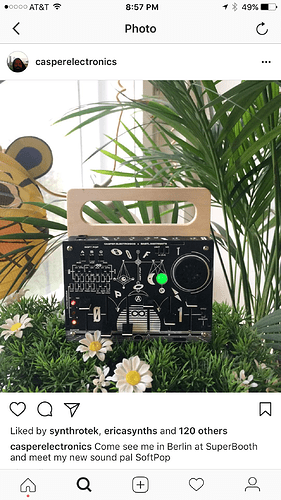 softPop is a playfully organic, semi-modular light and sound synthesizer with wide variety of sounds: from random dripping water pops to heavy subtractive basslines. Its fully analog core consisting of heavily feedbacked system of dual triangle-core oscillator, state variable filter and sample and hold is played through an intuitive interface of 6 faders that provides countless combinations which can be explored by anyone. It can also process external audio thru the filter while using the envelope follower to intuitively synchronise to the incoming signal. The analog soul is enhanced by a quantize feature (auto-tune) and pattern generator with two memories A and B. For adventurous and courageous souls there is a secret chamber in the back for hacking & modding.
We will launch the pre-orders in a couple of weeks with price somewhere below 300 eur.

… so where can we talk about THIS (in case it doesn’t jump to the right part, I’m talking about the synth from Casper Electronics at 34mins in):

took a glance but didn’t actually give full attn. yet

I’d say make a thread if/when there’s more info…have you dug anything else up? is this the 1st public appearance of the device?

Haven’t found anything anywhere. The Casper Electronics site is down so the only/most active sources seem to be social media and there’s not but a single picture on Instagram that I’ve seen. The comments on YouTube seem to indicate that this is a new concept still in development. Sadly, Cuckoo didn’t get the name of the thing so I guess we will have to wait on all fronts.

cant say no to that

i am so weak

It’s here… and it’s even more interesting than I originally thought.

mmm some nice juicy soundz. yay for batteries too!

Received mine the other day and I’m in love… Here are two super dirty(!) jams of the po12 being processed with, and guided by some acid from, the softpop, further destroyed by the cocoquantus. All boosted a bit with the vulf compressor. I ran out of cables so decided to record it directly from my portable speaker by close mic-ing with my portable recorder lol: you can hear me and a friend talk in the background…

I got one on Friday and spent a couple of hours with it over the weekend. It’s got nice character and a lot of options for sure. Only downside is that the recording of patterns is not as accurate/easy as I wished it would be. I have problem both with starting the recording accurately (even though I turn the VCO1 rate down) and playing back the pitches that I recorded (I don’t understand the logic of the VCO0 pitch fader in relation to the recorded pattern – it doesn’t scale the recorded pattern in a linear way I think).

But these are minor niggles, and I hope I’ll get my head around them. There’s depth, character and a lots of instant fun! Plus a carrying handle and a shoulder strap! What’s not to like? =)

Yeah have the same issues with the recording patterns, it seems to be very inaccurate to the point I can’t really recognise the pattern I put it (yes I’ve put the second slider all the way down). Also hoped it would apply to all sliders. Do I understand it well it saves a value on every tick of the VCO1? How long can a pattern be?

I just tried recording the pattern with an external keyboard, but didn’t have much more luck. It seems that after recording the pattern, if I want to preserve the original pitches of the pattern, I need to adjust the VCO0 pitch slider, but that also changes the ratio of the pitches? Or messes with the pattern in some other way. Yeah, VCO1 tick should is the pattern metronome, but I suspect that it doesn’t advance a step at the moment that by brain thinks it should, but some other more unintuitive part of the cycle. =)

I suspect the designer’s intended use case for the sequencer is adding variation to patches, and not entering precise sequences, which is somewhat disappointing, but I hope I’m wrong. =)

And by the way you can patch the sequencer to other destinations too, so in a way it applies to other sliders too!

Talked with Pete Edwards in person yesterday and he explained me the idea behind the sequence recorder and it makes way more sense now! It’s is actually precise as it measures the frequency of oscillator 1, instead of the position of the vco knob, every tick of osc 2. So try recording a sequence with the the second fader (the S/H mod) slightly up and VCO 2 on a reasonable tempo, move the second fader down when done recording and you’ll hear the sequence you just recorded. Pete admitted its a bit of a weird design and that the manual doesn’t do a great job explaining it. The reason is that he envisioned it as a recorder/quantiser which works well for weird/drifting oscillators. He also recommended me to start experimenting with it as a controller for external devices using its outputs.

Also asked him if the first shot of the trailer is a reference to Slint’s Spiderland, but its not apparently! 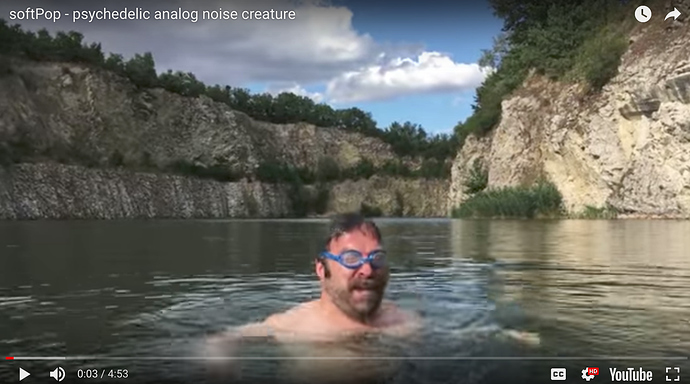 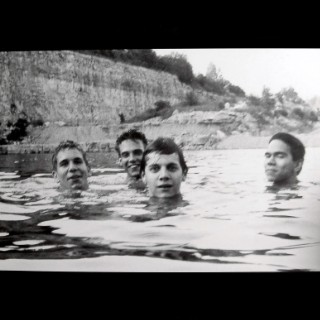 Hmm, tried it quickly just now, still no luck with the reproducing the pitches or even relative pitches accurately.

Also asked him if the first shot of the trailer is a reference to Slint’s Spiderland, but its not apparently!

@lijnenspel, aw man ever since I first saw the trailer I’ve been hoping and thinking of it as a reference to Slint’s spider land LP — love that record.

Love using my Soft Pop to process external equipment. Like drums, it can really add some industrial grit to a 707. Also using the sequencer to add variation to a synth line and just messing around with sliders. So much fun.

Really wanna use it as a controller like Peter suggested.

Thanks for posting this, I’ve had my SoftPop for a couple months now and your advice perfectly explained the inscrutable pattern recorder! Works like a charm, albeit still organic and pleasantly surprising!