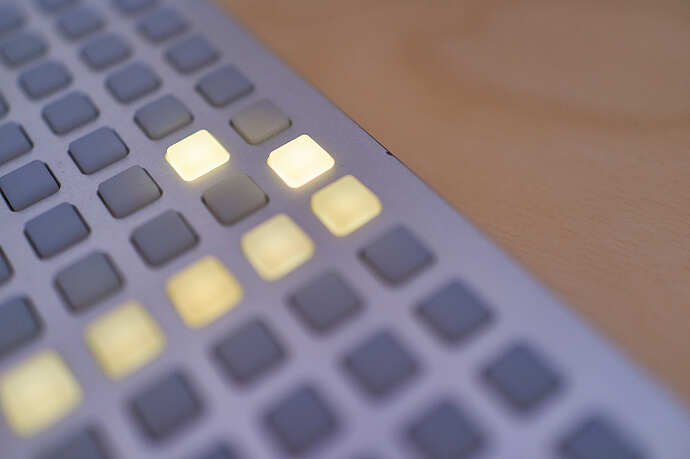 My grid took a fall a while back and now has a little nick in the top edge of the case. It’s been bothering me, though it shouldn’t. Everything functions perfectly and it’s still the same instrument.

This made me consider how the battle scars and patina should be celebrated for representing use, rather than fetishising industrial design of tools.

What stories do the marks and scratches on your equipment tell?

You dont wanna see my mbpro…

celebrated for representing use

1000% co-sign. instruments should be played, and it drives me past crazy to see so many things babied for sake of flipping or for parading around The Gram.

exhibit a: the buckle rash on my (and my father’s before me) 1972 les paul black beauty, right down to the mahogany. this guitar is covered in a sheen of my blood, other people’s blood, beer, and years of catharsis. to clean that, to hide that, would be to deny the memory and obfuscate the instrument’s trajectory towards it’s final form. 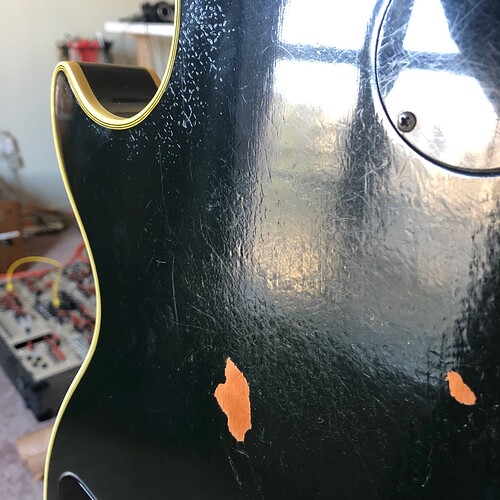 The original anecdote is probably age old and about something entirely different as usual, and I assume everyone has heard this in some form. But someone told me a story about a couple who had just bought a brand new shiny car, and were super worried and anxious about how the condition is so perfect that it feels so bad that eventually the first scratch or dent will appear, one has to be extra careful because of that, how dare we even drive this home in case something will happen et cetera et cetera. At which point the imaginary car salesman took the car keys, used them to scrape a little scratch next to the lock in the door, and said “there, you’re welcome, you don’t have to baby it anymore”.

I’m sure in real life the couple would have been furious, cancelled the deal that point, or at least made a complaint to the supervisor, the salesman would have been fired, and the car would have been later sold as b-stock or repainted, still at a reasonable profit, but I still think it’s a nice story.

What a beaut of an instrument! Absolutely agree with your sentiment, too.

I am always kinda happy when I buy something that is already scratched. I hate the whole culture of keeping the original box, etc.

I remember reading a blip about the guy who was in charge of redoing the gold leafing on the Kinkakuji in the 80s. They had finished leafing some pieces and instead of taking them to the pavilion to install them the guy said that they should let them sit for a couple months (or maybe a year?) so they could get a little more sabi.

I agree with the sentiment. There’s something to a patina, physical or otherwise, that grounds things and suggests reflecting on their history.

I remember reading a blip about the guy who was in charge of redoing the gold leafing on the Kinkakuji in the 80s. They had finished leafing some pieces and instead of taking them to the pavilion to install them the guy said that they should let them sit for a couple months (or maybe a year?) so they could get a little more sabi.

My S.O. is currently studying art conservation and there actually seem to be multiple schools depending on country and period of history regarding how that process should be done. For some it means restoring things to how they (must / probably have) looked when they were new (eg. in the case of paintings, doing heavier repainting to make them look “new” again), for others it means conserving them to last longer in the shape they’re currently in, with all their current history, instead of sort of deteriorating at a natural rate under the circumstances.

That kind of sounds like the latter school of thought: old things needn’t / shouldn’t look new and stand out or look unfamiliar because of that - rather, it’s nice that we can keep enjoying things that have history for longer.

(I’ll use this opportunity to admit that I never understood the concept of “rack rash” or why that should matter to anyone - hoping that anybody who feels strongly about that skips this post, hence doesn’t get mad at me

The concept of state for re-sale always felt like trading cards to me. I totally get rack rash and babying things if you’re not certain about them, and considering most people’s first foray into Eurorack is a lot of buying and selling, it makes sense there to me as well. (b/c people will pay more for mint w/box)

However, once I’m settled on something, the babying mostly stops. Scars tell a story on all my guitars and gear, even if that story is “remember when you kicked the MacBook off the bed and into the Strat”.

My hot take on this is, I despise “rellicking” guitars and other instruments. LET ME DO THE DAMAGE or at least someone who used it for it’s intended purpose. Not someone sitting in a factory going scitchy scratchy with some sandpaper.

to be clear: I am not mad at you

sadly I don’t have a picture but I once had a ‘66 gibson acoustic I bought when I briefly worked at a boutique guitar shop in college. my first job was to tune every guitar in the shop and this one had a huge strum wear mark below the pick guard, the kind that a guitar gets if played every day by a street performer to get more volume. it played better than any other guitar in the shop, including multi-thousand dollar guitars of every stripe. everyone who played that guitar remarked, unprompted, that it was a great playing guitar, and when I had to replace it after it was stolen, the relatively flawless ‘68 I replaced it with was never a great guitar. the wear on the ‘66 and the playing that created it made it singular.

Yep, it makes a lot of sense to keep things shipshape for potential resale purposes before “committing to ownership”. I’m just often wondering why it matters to some modular gear buyers that the surface of the front panel is slightly worn at the spots that the mounting screws go on top of.

(Naturally, it’s completely OK to feel and do whichever way for whichever reason with these aesthetic things, to each their own. I realize it’s bad form to say things like these aloud, a bit like “I just don’t understand why you listen to the kind of music you listen to”. That level of finickiness (?) is just something I can’t personally relate to.)

And I agree, the concept of relic(k)ing / artificially ageing instruments at the factory feels silly. Those rarely look convincingly old and used either. Ditto with clothes that are already blown off new, and other “clumsily worn down pre-purchase just to try to make it look cool” type stuff that you’re actually supposed to use actively, not keep on display.

Again, some like that and that’s fine, I’ll rather skip those and either get something new and in reasonably good shape, or something that’s actually been used a lot.

I can’t really say that the synths/keys have much damage, but the guitars/amps/pedals are another story. Paint chips, buckle rash, rips or indents in the tolex… My bass cab is carpeted so it’s a cat scratch post.

I am deeply proud of the hole I dug in my P-Bass next to the E string. I see it as evidence of dues paid and I will never repair it. 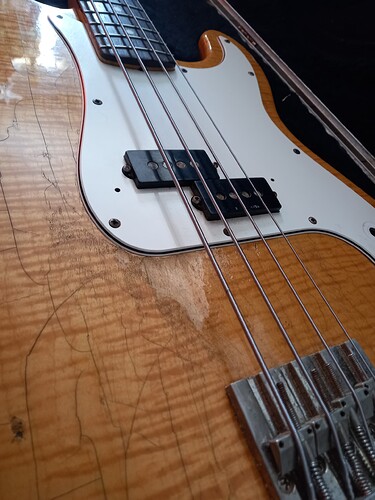 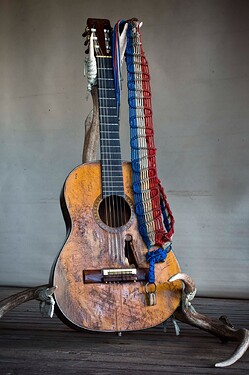 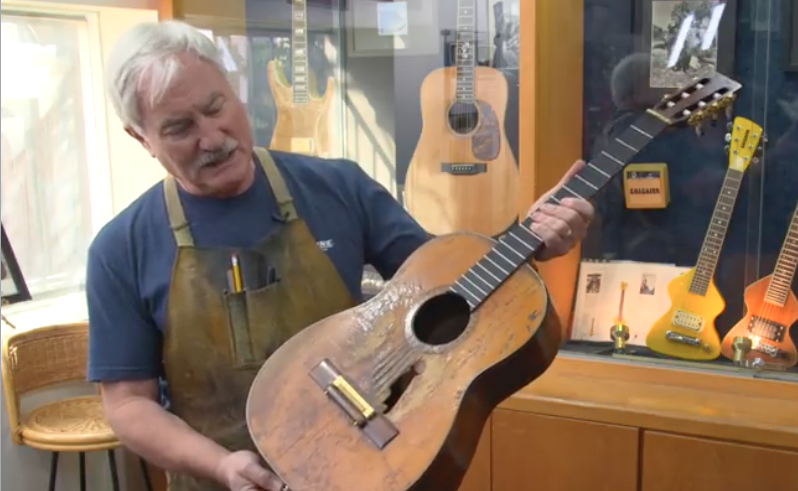 Repairing Willie Nelson’s Trigger: A Good Look at How a Luthier Gets...

Many guitarists are of two minds about tribute models. In some cases, they seem like shameless cash grabs, particularly when the artist is no longer with us and can’t consent to the process.

And for the Station Eleven fans: 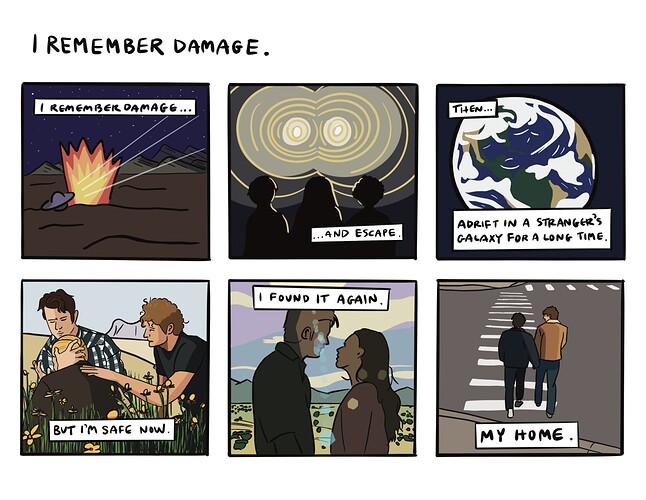 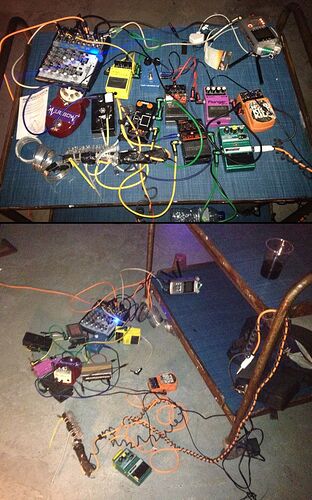 it strikes me that it seems like people are largely happy with things in two states: new & pristine or very old & showing wear. things that fall in-between (even if clearly all things must move between those two states) fall into a weird space for some.

No synth gear I’ve ever known scratches so easily as the Mungo 0-series panels. A couple I’ve bought new have arrived with nice big scratches across them. Even c1, whose panel features a new finish on the aluminium, is practically no hardier. Although it irked me at first, I’ve come to see this just as an amusing contrast with the otherwise robustness and high performance of the modules; another property making up their overall strangeness.

I rashed the jacks of nearly the whole lot once in an ill-fated attempt to colour-code ins and outs with bananuts!

ha, yeah, it does feel strangely appropriate doesn’t it? my c1 showed up with minimal dings but yeah, my g0 was scratch city. i figured yeah, well hey, panels made from recycled metal, makes sense. kinda reminded me of those old animodule panels that were just screen printed on the reverse of old/recycled street signs