A bit unrelated, but: the playback also isn’t “smooth”: there’s a slight volume dip as it transitions from one pad to the next, sounding a bit like a time-synced tremolo. I don’t have any envelopes on my pad’s levels or anything

ah yes, timing is synced to the 1/4 notes only, (far as i can tell). so when you make a random pattern, it’ll start in the next beat or two… dan has done amazing things to get it super tight and keep it simple. after making patterns i usually stop the pattern and restart. but this is part of the amazingness of cheat codes. you can get all patterns to start and sync solidly if you want to… but you can experiment in between the spaces too. offsetting things with each other, while still be time accurate… or not synced at all. it rules. i think there are plenty of things out there to loop and chop on beat… but to me cheat codes is an experimental beast… not just a 3 voice loop chopper. if you can make it do that… get it… but it might be a workaround type of thing?

I’ve been busy for a while but it is almost done. I’ll try to check today that everything is working as I want. There’s three encoder that controls the filter cutoff per bank that will work once Dan releases the new update, so I’ll keep it there anyway.

woahhh lots of new energy!! thanks for keeping the place warm overnight

just to circle back on some of these great q’s:

Split the pads evenly amongst the loop length

on grid, ALT + the second pad of zilchmo row 4 will auto-chop

Default the pads to playing back sequentially, synced to the beat

two ways to do this that don’t involve co-opting random patterns at all:

i’ll follow up with a quick overview of why your patterns weren’t starting at the same time (and how to get them to), but since these two features of cheat codes were built for exactly the purpose you’re describing (auto-advancing pads), i think they’re a better fit for your use case

Yeah, just better do it now.

Despite being a product developer, I made this layout thinking of what I’d like to use personally. To change things around to fit your performance and level of control desired is encouraged.

Unless I get more time in the future, I won’t update the iPhone layout for now. You may use this layout as guide for OSC messages and inspiration.

A few notes on PADS page: 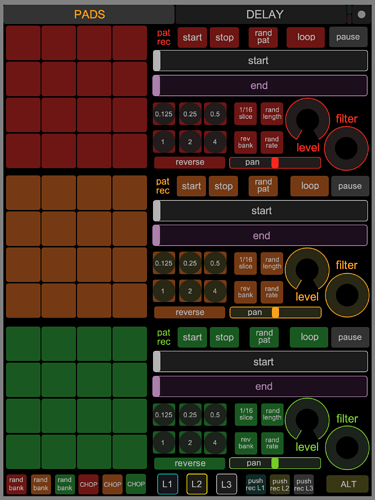 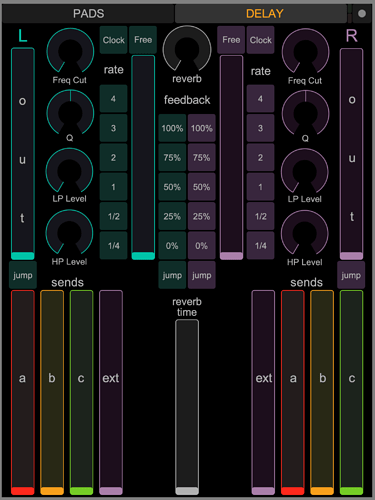 I’ll post any updates I make from now on, there’s still some space on Delay page.
Again, feel free to tweak things around.

incredible work @CarlosUnch ! look forward to giving this a try this evening

This is pure gold!! Thanks for your passion, you saved me years of life <3

doh! sorry about the zilchmo misinformation! was definitely a “my kid won’t let us sleep, so i’ll do something” post haha. @CarlosUnch this template is beautiful.

I cant seem to find the filter’s parameters exposed for midi mapping. Is there something i am missing?

not there yet, it’s in the coming update

just finished the last touches on the macros

did everything work out with the clocking? also, if you can share additional details about the latency question, i can try to provide guidance

I already have a grid, arc, and midifighter twister, but seeing this makes me want to get a tablet!

Haha I guess me trying to overcome not having any of that has turned the tables huh?

It’s nice each interface designed for CC has its role and do something that does better than the others. There’s definitely overlap, but much less than one would expect.

Thanks so much for this! ALT + auto-chop is great, altho reading the manual it’s not clear to me how it’s different from “1/16 length pads (bpm-synced)”?

Re: auto-advancement, the arp approach is way better imo than the euclid one. It allows quick swapping between auto-advancement and live re-working, all via the grid. Super fun!

This would still be great to hear, if you have the time! Right now I can get the arp “play heads” to align, but it takes a lot of tricky timing. A guaranteed way to do that quickly would be great.

The related bigger issue for me now is if I want to record e.g. rhodes into live buffer 1 (mapped to pad bank 1), bass into live buffer 2 (mapped to pad bank 2), and guitar into live buffer 3 (mapped to pad bank 3), then even if i get the arps to line up with some tricky timing, the record head and “play head” (aka arp position) aren’t lined up at all, so the instruments’ downbeats aren’t at all aligned. Like, I’ve done a live rhodes take to fill up buffer 1, and now I’m switched over to recording into buffer 2 while listening to the rhodes play back, it’s playing buffer 1 pad 1, so I hear that downbeat and play the bass that goes along with it, but unbeknownst to me the active record head for buffer 2 is like already 2 seconds into the buffer (more or less pad 3 or 4), so when bank 2 pad 1 comes back around it’s a total mess. How would I align the arp position with the record head?

I like to set my first pad in each bank to just play the loop, then I mangle the rest.

I love the idea of auto-chopping everything, but leaving the first pad as the whole loop! That probably simplifies a lot of things, at the cost of not being able to play “just” the first beat. Set the first pad to “loop” playback too, so it just… is the sound on sound looper, and the other pads are there to chop & screw.

I must not be explaining the record head vs arp position issue well, though, because one shot vs loop record doesn’t make a difference. I already manually toggle on / off recording as needed, but those settings don’t guarantee that the “play head” and record head are on the same beat at the same time.

@Clashley1 + @21echoes, great info, thank you for the additional insight!

i wrote much of this before your posts, but it sat drafted, so apologies if anything doubles-back.

auto-chop: dependent on the audio clip length, automatically distributes the slices/pads evenly across the total time (when used with ALT+, otherwise just distributes that one pad at its x/16 division). affects start + end point position.

1/16th length: dependent on the system clock, automatically shortens the slices/pads to a 1/16th note’s length. affects end point position. i often use this before auto-chop, and then use the zilchmos gestures for doubling a loop length to get 1/8ths, 1/4ths, etc.

Right now I can get the arp “play heads” to align, but it takes a lot of tricky timing […] How would I align the arp position with the record head?

the arp function is just a way to play back your pads/slices, so it’s entirely dependent on the pad/slice positions. if those aren’t all aligned with the material, then the arps won’t be aligned.

if i’m still misunderstanding the issue here, let’s hop on a call – hmu!

those extra performance details help – just to make sure i’ve got it:

ultimately (and most critically for the situation), the three playheads and the single record head are decoupled in cheat codes by design. the only time when any play/record heads are linked is in [delay]. if it helps to share: the personal musical goal of the live recording components was to feed material on-demand as a reaction to needing new content to be pulled apart, rather than looping that material’s original performance.

the basics of what you’re describing is what one-shot record mode was made to facilitate – it has three launch modes: next beat, next bar, and free. but it doesn’t loop. so perhaps it’d help to have launch modes for the looping recording, so that you can cue up a new looping recording and the record head will start in an expected place? and then you can simultaneously press pad 1 (which will have the long loop) to make sure that it’s playhead starts at the same time as the record head – lmk if this feels like it’d be a good solution?

in the coming update, i’ll also expose the # section of the [loops] page, where you can watch the playheads for all three banks + the live recording segment in one place.

watch the playheads for all three banks + the live recording segment in one place.

just thought of that yesterday! Very nice to have those visualized in one place

I’m kinda using it as a live looper. Like what re:mix offers, but on norns. I like the first pad playing my whole live loop so that I can get my hands away from the guitar and onto the grid without dropping a beat. I can then overdub, or fill the next live segment, or start mangling to create new auditory content. I love how versatile cheat codes 2 is. It can be a mega delay, it can be a harmonizer, it’s an arpegiator, it’s a live looper, load prepped clips in and it’s your entire dj set. It’s magical.

So If I’m in 1-shot recording mode, I can’t ‘punch in’ and ‘punch out’ like I can in loop record mode? I assumed that’s what free was. But free was referring to the quantization of record head starting.

Oh, I had a random idea of cheat codes last night. What if Alt + alt + a zilchmo affected every bank at the same time? Probably more useful to me as a 64 user. But it would be cool to suddenly reverse everything and then reverse it back. Or mute everything at once